GitLab CI: Learn how to set up deployment pipeline to multiple environments

Discover the benefits of GitLab CI/CD

This post is a success story of one imaginary news portal, and you're the happy owner, the editor, and the only developer. Luckily, you already host your project code on GitLab.com and know that you can run tests with GitLab CI. Now you’re curious if it can be used for deployment, and how far can you go with it.

To keep our story technology stack-agnostic, let's assume that the app is just a set of HTML files. No server-side code, no fancy JS assets compilation.

Destination platform is also simplistic - we will use Amazon S3.

The goal of the article is not to give you a bunch of copypasteable snippets. The goal is to show principles and features of GitLab CI so that you could easily apply them to your technology stack.

Let’s start from the beginning: no CI in our story yet.

Deployment: in your case, it means that a bunch of HTML files should appear on your S3 bucket (which is already configured for static website hosting).

There're a million ways to do it. We’ll use the awscli library, provided by Amazon.

Important detail: the command expects you to provide AWS_ACCESS_KEY_ID and AWS_SECRET_ACCESS_KEY environment variables. Also you might need to specify AWS_DEFAULT_REGION.

With GitLab, there's no difference on what commands to run. You can set up GitLab CI according to your needs as if it was your local terminal on your computer. As long as you execute commands there, you can tell CI to do the same for you in GitLab. Put your script to .gitlab-ci.yml and push your code - that’s it: CI triggers a job and your commands are executed.

Let's add some context to our story: our website is small, there is 20-30 daily visitors and the code repository has only one branch: master.

Let's start by specifying a job with the command from above in .gitlab-ci.yml:

It is our job to ensure that there is an aws executable. To install awscli we need pip, which is a tool for Python packages installation. Let's specify Docker image with preinstalled Python, which should contain pip as well:

You push your code to GitLab, and it is automatically deployed by CI

The installation of awscli extends the job execution time, but it is not a big deal for now. If you need to speed up the process, you can always look for a Docker image with preinstalled awscli, or create an image by yourself.

Also, let’s not forget about these environment variables, which you've just grabbed from AWS Console:

It should work, however keeping secret keys open, even in a private repository, is not a good idea. Let's see how to deal with it.

GitLab has a special place for secret variables: Settings > Variables

Whatever you put there will be turned into environment variables. Only an administrator of a project has access to this section.

We could remove variables section from our CI configuration. However, let’s use it for another purpose.

When your configuration gets bigger, it is convenient to keep some of the parameters as variables at the beginning of your configuration. Especially if you use them in multiple places. Although it is not the case in our situation yet, let's set the S3 bucket name as a variable, for demonstration purposes:

So far so good: 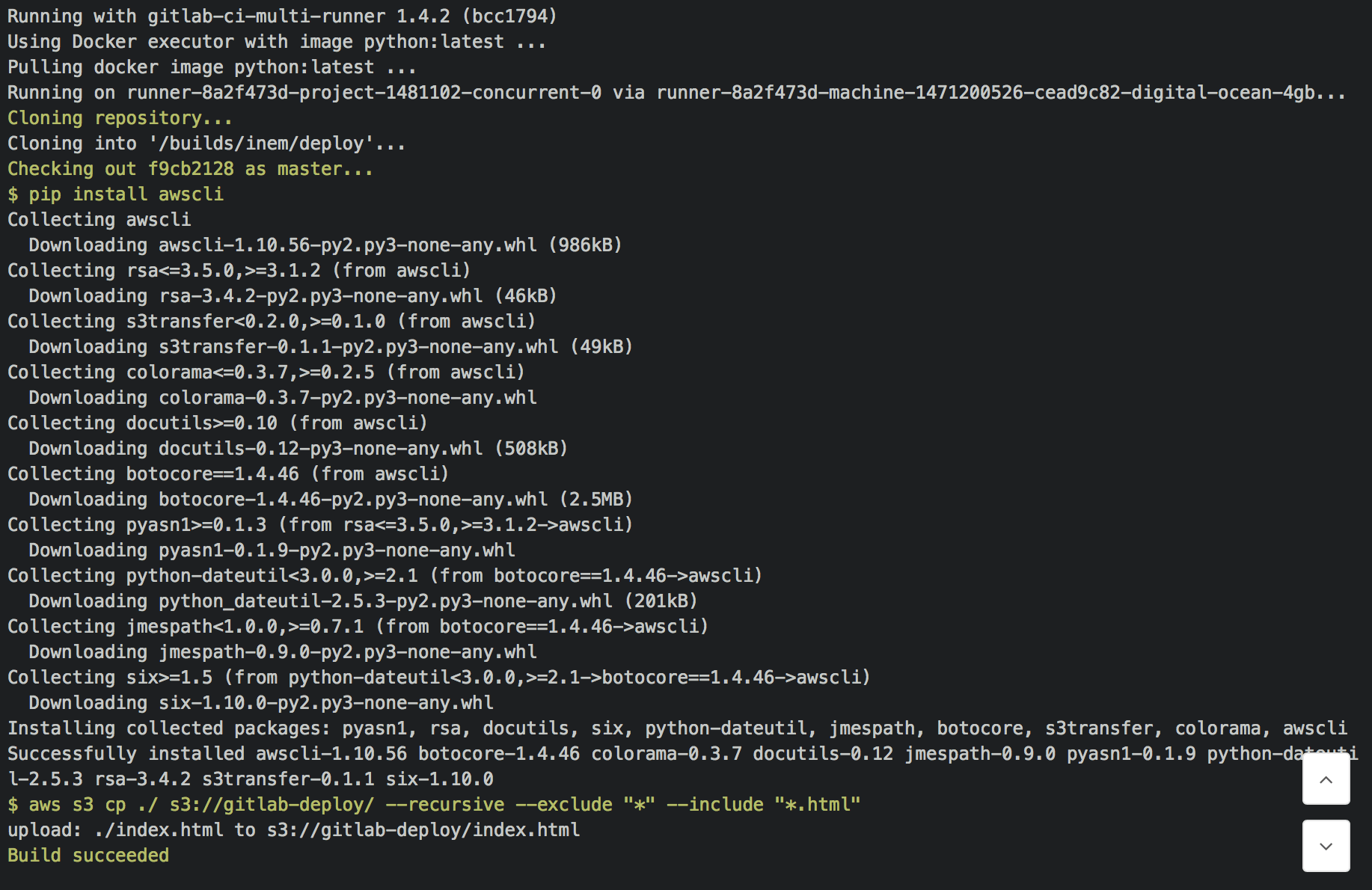 Because the audience of your website grew, you've hired a developer to help you. Now you have a team. Let's see how teamwork changes the workflow.

Now there’s two of you working in the same repository. It is no longer convenient to use the master branch for development. You decide to use separate branches for both new features and new articles and merge them into master when they are ready.

The problem is that your current CI config doesn’t care about branches at all. Whenever you push anything to GitLab, it will be deployed to S3.

Preventing it is straightforward. Just add only: master to your deploy job.

You don't want to deploy every branch to the production website

But it would also be nice to preview your changes from feature-branches somehow.

Setting Up a Separate Place for Testing

Patrick (the guy you recently hired) reminds you that there is such a thing called GitLab Pages. It looks like a perfect candidate for a place to preview your work in progress.

To host websites on GitLab Pages your CI configuration should satisfy these simple rules:

The contents of the public folder will be hosted at http://<username>.gitlab.io/<projectname>/

After applying the example config for plain-html websites, the full CI configuration looks like this:

All branches, except master, will be deployed to GitLab Pages

GitLab offers support for environments, and all you need to do it to specify the corresponding environment for each deployment job:

GitLab keeps track of your deployments, so you always know what is currently being deployed on your servers:

GitLab provides full history of your deployments per every environment:

Now, with everything automated and set up, we’re ready for the new challenges that are just around the corner.

It has just happened again. You've pushed your feature-branch to preview it on staging; a minute later Patrick pushed his branch, so the Staging was re-written with his work. Aargh!! It was the third time today!

Idea! Let's use Slack to notify us of deployments, so that people will not push their stuff if another one has been just deployed!

Setting up Slack notifications is a straightforward process.

…and put it into Settings > Services > Slack together with your Slack username:

Since the only thing you want to be notified of is deployments, you can uncheck all the checkboxes except the “Build” in the settings above. That’s it. Now you’re notified for every deployment:

As the time passed, your website became really popular, and your team has grown from 2 to 8 people. People develop in parallel, so the situation when people wait for each other to preview something on Staging has become pretty common. “Deploy every branch to staging” stopped working.

It's time to modify the process one more time. You and your team agreed that if someone wants to see his/her changes on the staging server, he/she should first merge the changes to the “staging” branch.

The change of .gitlab-ci.yml is minimal:

is now changed to 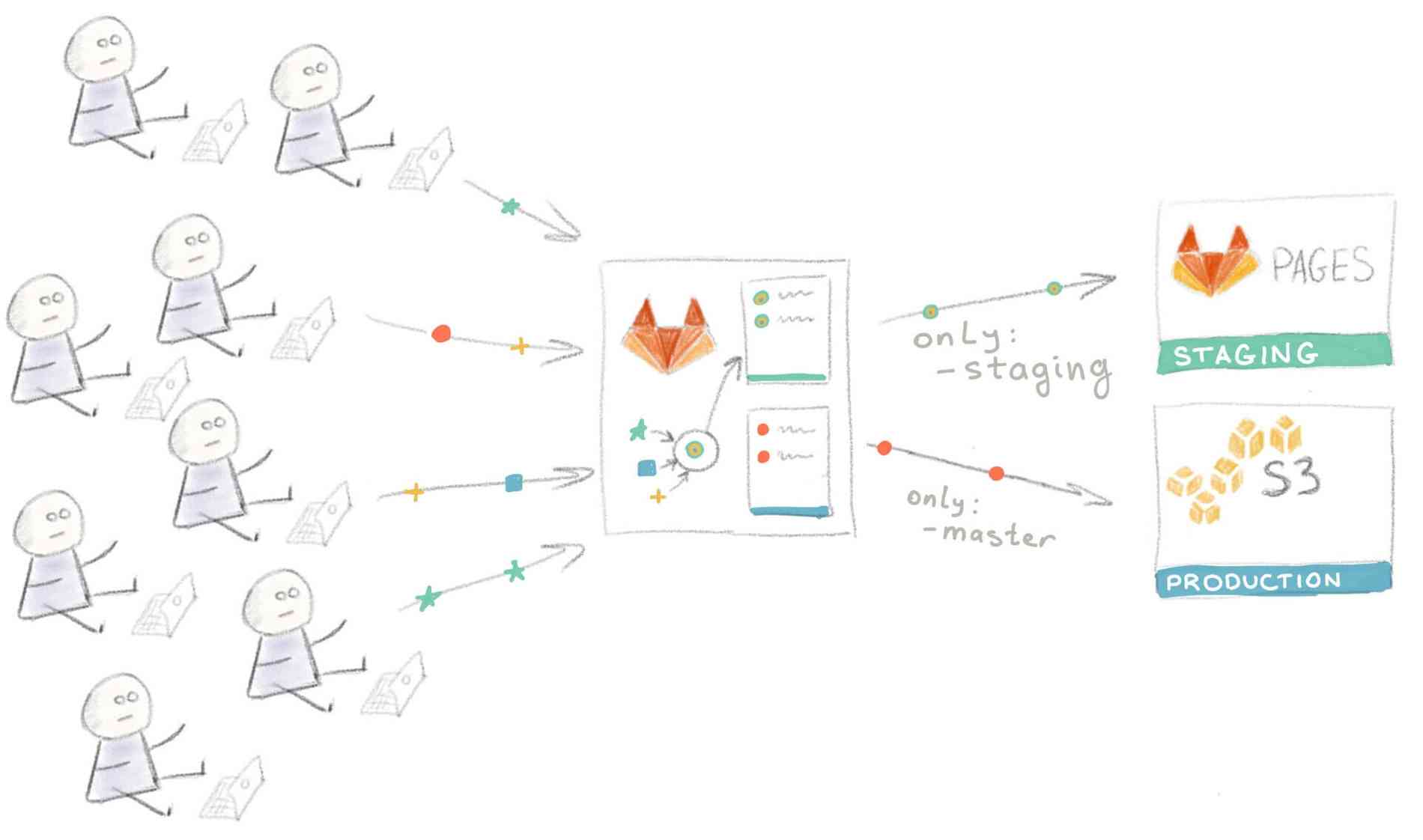 People have to merge their feature branches before preview on Staging

Of course, it requires additional time and effort for merging, but everybody agreed that it is better than waiting.

You can't control everything, so sometimes things go wrong. Someone merged branches incorrectly and pushed the result straight to production exactly when your site was on top of HackerNews. Thousands of people saw your completely broken layout instead of your shiny main page.

Luckily, someone found the Rollback button, so the website was fixed a minute after the problem was discovered.

Anyway, you felt that you needed to react to the problem and decided to turn off auto deployment to production and switch to manual deployment. To do that, you needed to add when: manual to your job.

As you expected, there will be no automatic deployment to Production after that. To deploy manually go to Pipelines > Builds, and click the button:

Finally, your company has turned into a corporation. You have hundreds of people working on the website, so all the previous compromises are not working anymore.

The next logical step is to boot up a temporary instance of the application per feature-branch for review.

In our case, we set up another bucket on S3 for that. The only difference that we copy the contents of our website to a "folder" named by a name of the development branch, so that the URL looks like this:

Here's the replacement for the pages job we used before:

The interesting thing is where we got this $CI_BUILD_REF_NAME variable from. GitLab predefines many environment variables so that you can use them in your jobs.

Note that we defined the S3_BUCKET_NAME variable inside the job. You can do this to rewrite top-level definitions.

Visual representation of this configuration: 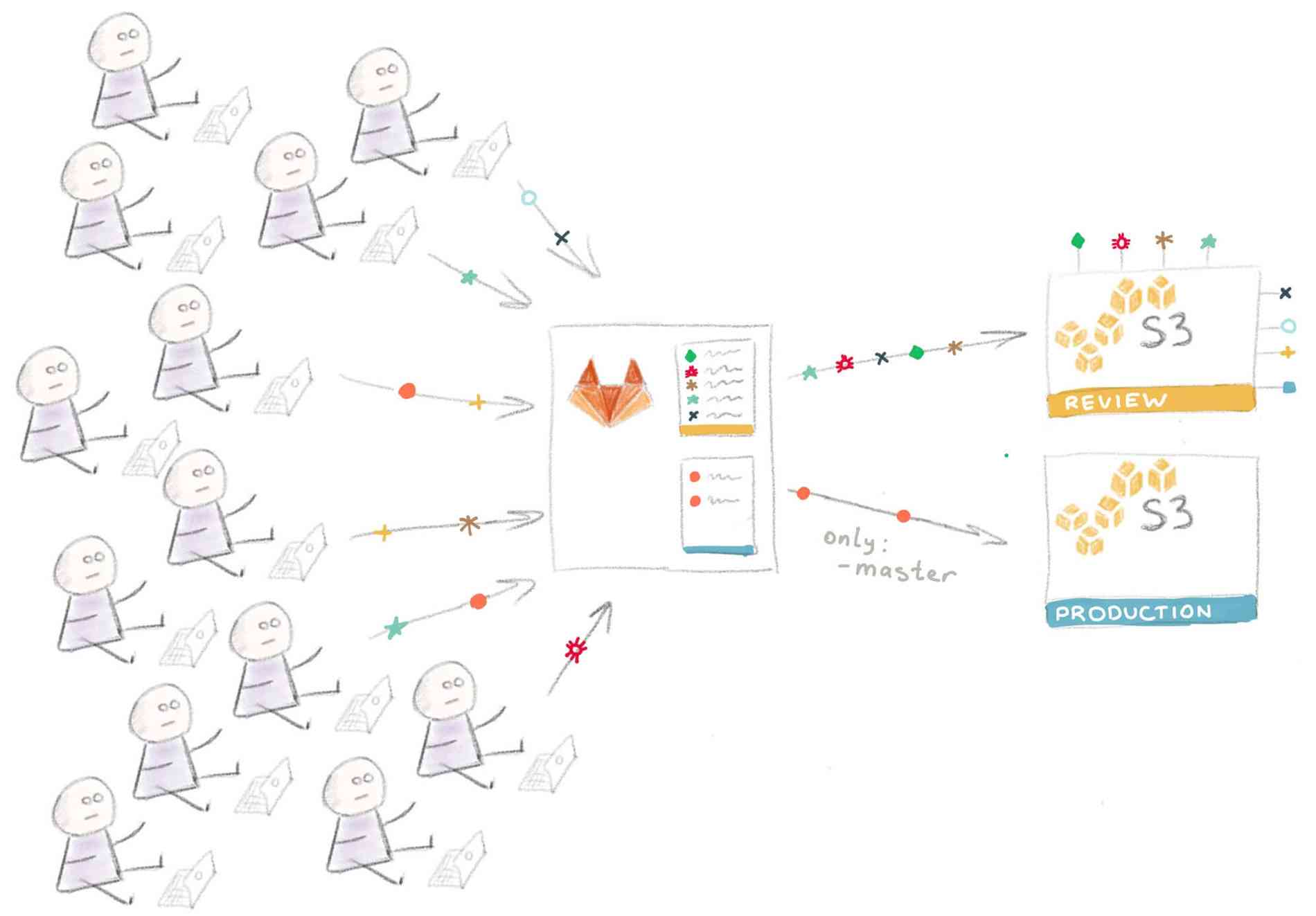 The details of Review Apps implementation depend widely on your real technology stack and on your deployment process, which is out of the scope of this blog post.

It will not be that straightforward, as it is with our static HTML website. For example, you had to make these instances temporary, and booting up these instances with all required software and services automatically on the fly is not a trivial task. However, it is doable, especially if you use Docker, or at least Chef or Ansible.

We'll cover deployment with Docker in another blog post. To be fair, I feel a bit guilty for simplifying the deployment process to a simple HTML files copying, and not adding some hardcore scenarios. If you need some right now, I recommend you to read article "Building an Elixir Release into a Docker image using GitLab CI"

For now, let's talk about one final thing.

In real life, we are not limited to S3 and GitLab Pages. We host, and therefore, deploy our apps and packages to various services.

Moreover, at some point, you could decide to move to a new platform and thus need to rewrite all your deployment scripts. You can use a gem called dpl to minimize the damage.

In the examples above we used awscli as a tool to deliver code to an example service (Amazon S3). However, no matter what tool and what destination system you use, the principle is the same: you run a command with some parameters and somehow pass a secret key for authentication purposes.

The dpl deployment tool utilizes this principle and provides a unified interface for this list of providers.

Here's how a production deployment job would look if we use dpl: