How to reduce DevOps costs

Learn how to identify waste, invest in long-term growth, and the formula for DevOps nirvana.

A well-oiled DevOps machine is a powerful thing – teams are deploying faster, processes are automated, everything is well-structured, and the cost is consistent with expectations. The reality for some teams is they’re not always able to hit all four in that Venn diagram and deliver on coveted DevOps cost savings. 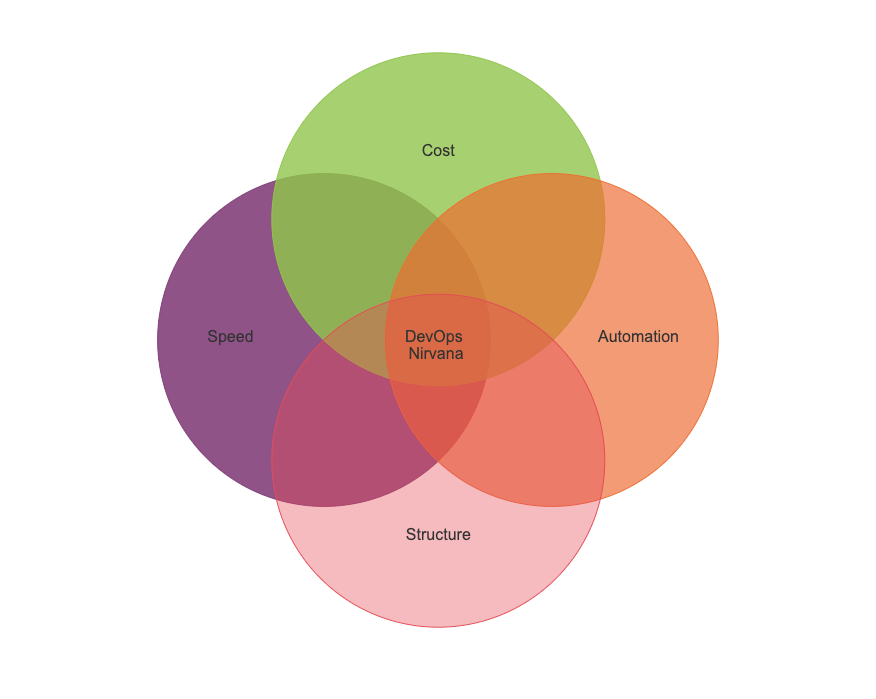 While we can’t show how to maximize every aspect today, reducing DevOps costs remains a high priority for teams wanting to optimize their SDLC. Every efficient DevOps team is able to do more with less, but that approach does require some discipline and a serious inventory of what adds cost versus what adds value.

One of the biggest culprits of DevOps cost saving is cloud sprawl. Just like server or VM sprawl, cloud sprawl happens when cloud instances aren’t managed or organized effectively. Cloud has a number of benefits that add incredible value – high resiliency and uptime, organizational efficiency among them – but that doesn’t mean it will automatically be cheaper. If left unchecked, cloud costs can be even greater than on-prem. Cloud pricing includes other factors like storage, networking, monitoring, and backups, among other services.

Cloud sprawl can also refer to SaaS instances, such as Salesforce, Adobe, or any other online service, where an organization pays for new user accounts but doesn't actually use them. Monitoring cloud usage can give some insights on a stretched DevOps budget.

Autoscaling runners help organizations manage their cloud costs by allowing VMs to spin up or down as needed. See how Substrakt Health saved 90 percent on their EC2 costs by utilizing GitLab runners.

The DevOps tool landscape is … overwhelming. A complicated DevOps toolchain doesn’t just slow things down, it inflates cost as well. Several "inexpensive" licenses that look harmless in micro add up quickly in macro. This doesn't even factor the ongoing costs of keeping these services going (upgrades, management, additional staff). Look at your toolchain – plugins, applications, and licenses – and evaluate the costs. By simplifying the toolchain, you reduce DevOps costs and maintenance. Instead of tying up engineering resources dedicated to maintenance, you can focus your budget and headcount on driving business outcomes.

How much is your toolchain? We created a handy toolchain calculator that shows the annual cost for some of the most common DevOps tools.

On the other side of the coin, teams that haven’t modernized their infrastructure run into a new set of cost hurdles. When you hear about leading companies like Amazon and Facebook, they have an advantage: They can build relatively new systems and DevOps capabilities into their applications because they don't have legacy systems to worry about. Over time, the true cost of legacy systems is enormous: From additional resources needed to maintain them, to lost productivity, they can hinder investments in long-term growth – the thing that will increase revenue in the long run.

The use of automation to streamline resources and cloud instances when not in use can be an effective solution to cut down costs. Manual tasks create process bottlenecks and increase staff costs. Testing, in particular, is an area where manual tasks appear most often for even large enterprises. The volume and complexity of testing environments mean that machines are well-suited for the job, and a modern QA strategy is all about leveraging that automation effectively.

Reducing DevOps costs is a challenging process. To create a path for long-term growth, it might be necessary to invest in solutions now that add business value later. Organizations that reach DevOps nirvana are able to identify areas of waste (cloud costs, manual tasks, inefficient processes) and invest in growth (automation, infrastructure).

Are you ready to reduce DevOps costs and add long-term value? Just commit.

Photo by Dayne Topkin on Unsplash

How we're improving migrations from Jenkins to GitLab CI/CD

Learn more about our Jenkins Importer category and see what's in the works for easier Jenkins migrations.

Learn more about this future release and how pre-filled variables will save time and reduce errors.

We predict how CNCF's five tech trends to watch will impact cloud native and the tech industry over the next year and beyond.