GitLab.com is the largest installation of GitLab on the planet, and it has traditionally served as an at-scale test environment for new releases. The current development and release cycle operates on a monthly schedule and is centered around the release of a new version of GitLab on the 22 of the month (a deadline GitLab has never missed in its history). After initial testing and following a deployment to staging, Release Candidates (RCs) are deployed to GitLab.com to validate them at scale.

This approach presents challenges whenever a Release Candidate introduces instability into the environment, as they contain large numbers of changes, which can have significantly adverse effects on GitLab.com’s uptime. Furthermore, mission-critical workloads do not tolerate such a scheme: a pre-production code base cannot properly support said workloads consistently.

GitLab.com is a production site with an availability OKR of 99.95% uptime, so a different approach to drive change into the environment is necessary, one which allows us to:

The overall strategy to meet this challenge is through CI/CD, which is in fact an important feature of our product. While there is little or no disagreement on this approach, we have found it difficult, as an organization, to get started. This blueprint is intended to produce a first step on the iterations towards CI/CD.

The end goal of this effort is to allow GitLab Auto DevOps to deploy to GitLab.com.

Release Candidates are, by definition, not fully production-ready code, and contain large numbers of changes. Hot Patches address issues on GitLab.com that cannot wait for the next release.

Whenever a RC is deployed to GitLab.com and causes instability, tracking and finding the source of the problem in such large changesets can be difficult; once the source of a problem has been identified, a determination is made whether to fix the issue in-place (through a hotpatch) or to wait for the next release candidate addressing the issue. In either case, there is a waiting period to actually implement the fix, which happens under the pressure of an ongoing incident.

Deploying RCs is the equivalent of hitting the production environment with a sledgehammer: the environment can usually widthstand a hit or two, but it will eventually crumble. And probability theory is not working in our favor. Increasing the rate of RC deployments exacerbates the negative effects of this methodology on GitLab.com.

Hot patches are lifesavers in that they allow us to address critical issues on the spot. Yet their very existence is a sign that our development process is in need of change: they exist because rolling back a RC is rarely possible and very labor intensive. They are deployed through an entirely different process and come with their own set of dangers. Most notably, we have experienced issues in which hotpatches applied to GitLab.com at a given point in time may:

Furthermore, after a RC is deployed, any active hotpacthes must be reapplied, which requires a window of time in which the fix is not available. Automated hotpatch application has also proven challenging and problematic.

As mentioned in the Overview, our stated strategy to drive change into GitLab.com is through CI/CD. Martin Heller provides a concise summary of the challenges involved in adopting CI/CD:

What it really takes for most companies to implement CI and CD is to completely change their software development culture, adapt their organization, change their workflow, automate the bulk of their testing, and either install significant infrastructure or learn to love the cloud. None of that is impossible, but none of that is easy.

GitLab builds technology to implement CI/CD, and we believe in dogfooding our own product, so we already have most of the technical answer and cultural driver to adopt CI/CD. We must contend with the remaining challenges as outlined above. The first step is to translate those generic challenges into GitLab specifics.

We also face some special but not entirely unique challenges.

GitLab provides support for both GitLab.com and self-managed. The Distribution team builds and ships the tooling to have customers perform their own installations, updates, and upgrades, which GitLab.com is supposed to (and mostly does) use. GitLab.com, however, deviates from this process slightly: it uses the same package install as customers would, but they’re wrapped up in takeoff, which issues HUPs and restarts the environment a bit differently. This methodology does not inherently support hotpatches: self-managed customers do not require it as it is primarily used to address significant issues on GitLab.com. Customers get security releases. The challenge of adopting CI/CD is that it will likely entail breaking up this notion entirely in one of two ways:

GitLab.com and self-managed customer operate at different speeds. GitLab.com exists in the now; self-managed customers exist in the realm of the current development cycle methodology, which culminates with a release on the 22nd of every month. By necessity, the solution to this challenge must support both speeds of delivery.

The first fundamental question we must answer and commit to with regards to GitLab.com is whether GitLab.com is always on the leading –not bleeding– edge of our development cycle: as soon as production-ready code (for a new feature or a fix) is available, it is deployed to GitLab.com. The answer is significant because it is directly related to speed differences between GitLab.com and self-managed, and will have an impact on our approach.

From an Infrastructure perspective, the answer is a resounding yes. This is particularly true for fixes that address broken functionality on GitLab.com, especially those related to security or critical features (e.g., pushes), which would remove the need for hotpatches as a duct-tape type of release.

Furthermore, our confidence on the product we ship to self-managed is directly related to the amount of time the code has been in production at GitLab.com. The earlier the code is running on GitLab.com, the more confidence we gain on its trustworthiness.

The second fundamental question is to determine if there is indeed a single solution that can operate at both speeds. The Cloud Native initiative, based on Kubernetes, is headed in that direction but it has not yet provided a final answer, and its implementation is not trivial. We may have to build a bridge solution to manage our current operating scale until Kubernetes is introduced in the environment and GitLab can fully operate under said environment.

Continuous Integration is a software development practice in which you build and test software every time a developer pushes code to the application, and it happens several times a day.

Continuous Deployment is a software development practice in which every code change goes through the entire pipeline and is put into production automatically, resulting in many production deployments every day. It does everything that Continuous Delivery does, but the process is fully automated, there's no human intervention at all.

There is ample literature on the benefits of adopting CI/CD. One particularly relevant quote for Infrastructure is from Martin Fowler:

Continuous Integration doesn’t get rid of bugs, but it does make them dramatically easier to find and remove.

This is, of course, aligned with our most important OKR for GitLab.com: its availability.

At its core, CI/CD involves the frequent release of small batches of new functionality into the production environment, which is perhaps the most fundamental change the Engineering organization must adopt as a whole, as no single department can do so on its own.

The effects resulting from deploying small batches of changes are easier to measure and understand than that of large changesets (like RCs), yielding faster resolution of problems and allowing for higher change velocity at higher levels of confidence and safety.

We must adopt development practices such as:

From a cultural standpoint, we must move towards the mindset that master is production, which entails understanding that all code in master must be production quality, and as such, is code that should be able to be shipped to the production environment at any time.

To ensure all code in master is production-ready, we have to implement gated commits to reach master, which requires an automated deployment and testing process. This provides shorter feedback cycles for developers, helping them improve their code in a time horizon close to when the code is initially written: context switching is expensive, and having developers refocus on code written days ago is a significant context switch. 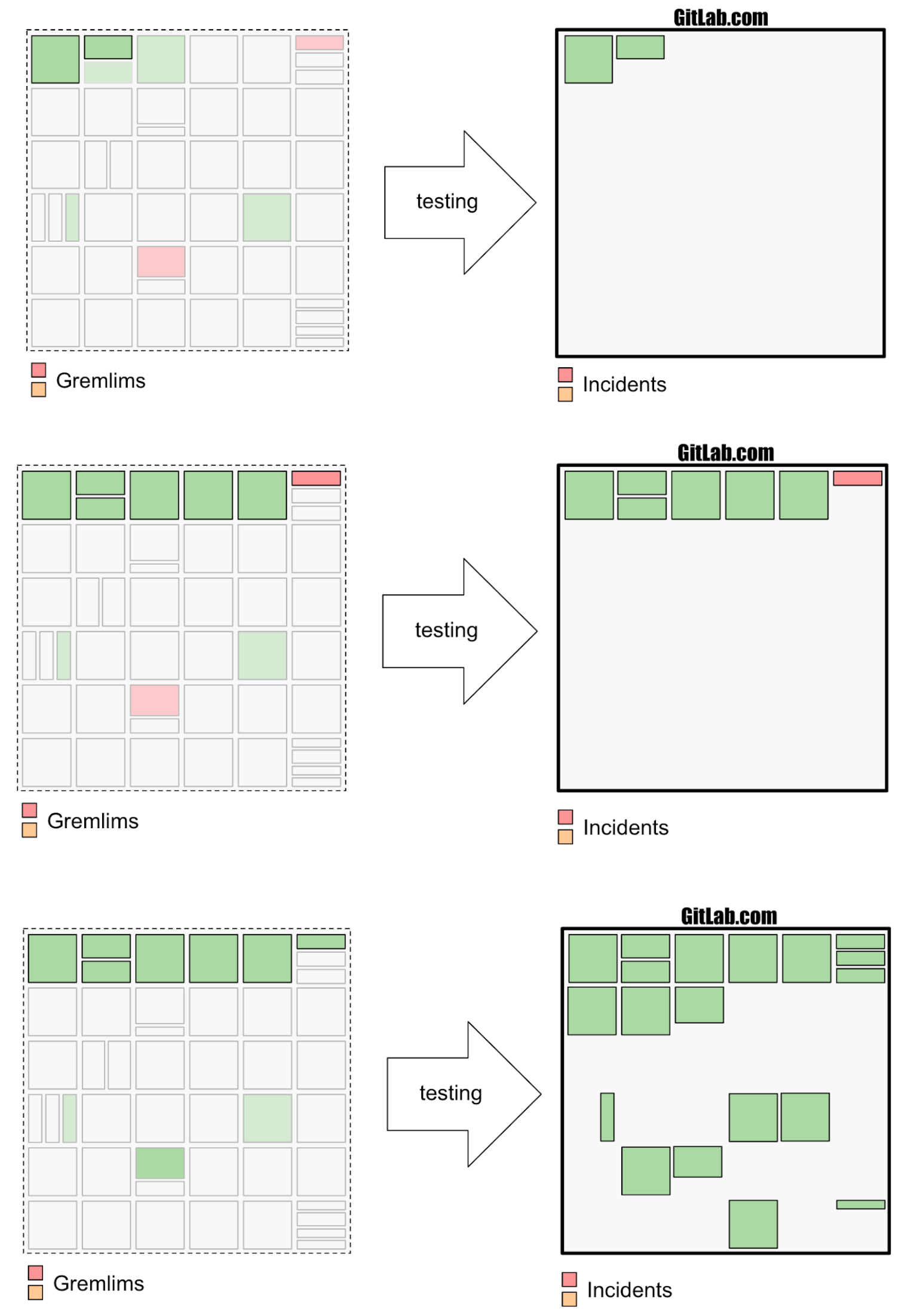 Marin Jankovski has given significant amounts of thought to this transition, perhaps with an even wider perspective than the one outlined in this blueprint (which, as noted at the beginning, is very Infrastructure centric). See framework/issues/1 for details.

Rather than putting together a grand plan to dogfood CI/CD, let's deploy our values to help us navigate through this transition: