Any database schema and database-related application code changes need verification. The verification process can be considered as entirely relevant and efficient (development process-wise) only when backend engineers can perform such verification on production-scale data sets and without a DBRE's help.

Until Autumn 2019, at GitLab, performing verification of such changes on production-scale data sets implied the following problems:

As described in the Blueprint, a new approach was proposed: the use of Joe bot and Database Lab created and maintained by Postgres.ai. The main ideas behind them are:

As a result, with the new tool, any backend developer from the GitLab team is capable of verifying any SQL query plans on a production-scale database clone, without having access to production and not waiting for help from SREs or DBREs. Engineers without in-depth query optimization knowledge also benefit from optimization bits of advice the bot provides.

Users (backend developers and DBREs) interact with a production database clone using Slack. They can execute queries and get execution plans with performance metrics without direct access to the data.

Slack as an interface is very accessible. It provides some basic collaboration and search capabilities. At the same time, it is not always (and not for everyone) convenient during development. Having a CLI as an alternative interface might be a good option. Database Lab provides CLI for those who are granted full access to production data. With Database Lab CLI it becomes possible to request for a thin clone of production database, get it in a few seconds, and then work using any tool, including official CLI (psql) or any third-party GUI.

As of January 2020, many developers at GitLab prefer using explain.depesz.com to visualize queries. At Postgres.ai, there is work in progress to provide better means to integrate Joe with the best Postgres plan visualization tools.

The data (a clone of production database) is located on an SSD Persistent Disk (PD) in Google Cloud. The data on the PD is continuously updated thanks to Database Lab's so-called "shadow instance" – a Postgres instance which continuously receives and replays WAL data from WAL archive (WAL-E/WAL-G). Periodically, the baseline snapshot used for thin cloning is being refreshed (as of January 2020, manually, 2-4 times per month; we plan to switch to automated refreshes in the nearest future).

For better disk IO characteristics, GCE instances have to have more vCPUs. The best performance is achieved with 60 or more vCPUs (see Google's official documentation with PD performance specifications).

As of July 2019, GitLab.com's production Postgres nodes have machine type n1-highmem-64, with 64 vCPUs and 416 GiB of memory (Update: a few months later, GitLab.com database switched to n1-highmem-96, with 96 vCPUs and 624 GiB). It means that sustained disk throughput is 1,200 MiB/s for reads and 400 MiB/s for writes. Joe is not designed to work with hundreds or thousands of users simultaneously, which would imply having many gigabytes of hot caches. So, higher volumes of memory are not required. Use of n1-highcpu-32 with 32 vCPUs and 28.8 GiB of memory looks reasonable, meaning that a similar level of disk characteristics will be achieved for much fewer budgets.

For additional budget savings, it is reasonable to consider using a preemptible instance (price for preemptible n1-highcpu-32 is 78.8% lower compared to the regular n1-highcpu-32, see the official documentation), re-provisioning such instance only when it is needed, keeping PD independent and attaching it, or re-creating it from a PD snapshot. However, this requires a fully automated and hassle-free approach to Database Lab instance provisioning. The planned implementation of Kubernetes support in Database Lab and Joe bot will meet these needs.

To receive Slack events, we need to set up a publicly available hostname, and NGINX server with SSL enabled. We use 443 port for SSL connection. An SSL certificate has to be generated for the hostname.

For the period of initial testing, we provisioned an instance of type n1-highcpu-32, with 6 TiB standard (not "SSD") PD. Obtaining of Postgres database clone was done using the so-called "restore" project that is used for daily backup verification.

On this PD, we created a ZFS pool using the following command:

No additional ZFS tuning was performed during this test (such as setting certain ARC cache values).

The production database was restored from the WAL-E archive (in the same way that it is done daily for backup verification). Then, the database was promoted to become a primary (to allow changes). Right after that, a ZFS snapshot was created to support Joe's reset command.

The restoring of the database was done on the same node. So for testing purposes, the setup included only one GCE instance: 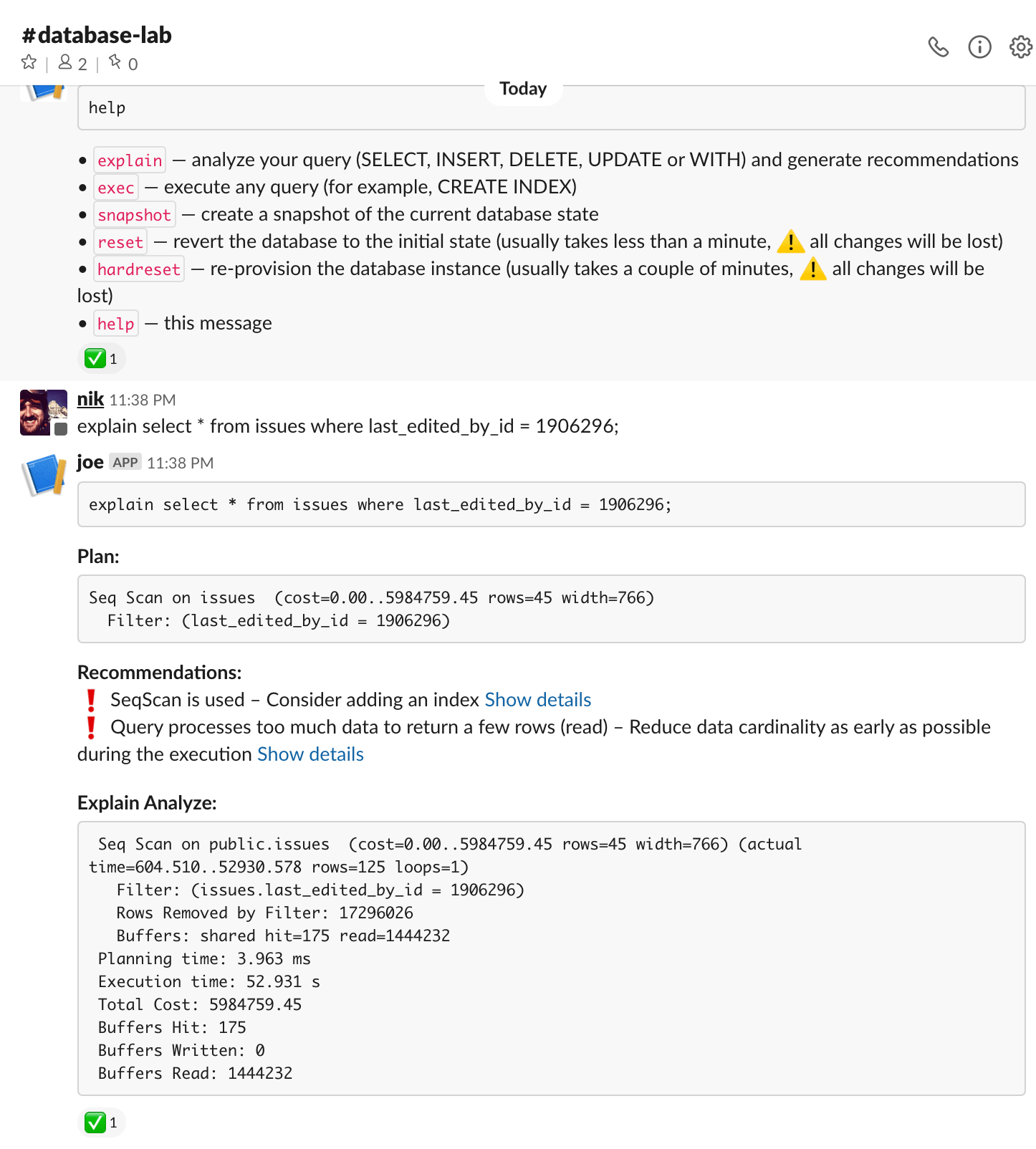 Joe works with a clones of production databases. Users see only query execution plans, they do not have direct access to the data.

On database machines being by Joe, only 22 and 443 ports are open. The latter is used to organize communication with Slack. PostgreSQL is configured to work only locally.

While direct access to the data is not allowed, users can get information about presense of concrete values in the database (example: analyzing the pland of SELECT .. FROM t1 WHERE c1 = :some_value we can understand how many records with c1 = :some_value are present in the table t1). This makes possible to use blind SQL injection: each query allows to leak some bits of information. The following is implemented in Joe code to mitigate these risks:

It is not uncommon that during SQL query optimization, developers overlook the fact that query performance highly depends on the state of OS and Postgres caches (the file cache and the buffer pool).

Joe helps to understand, was the most of the data obtained from the Postgres buffer pool or OS cache, or it was mostly read from the disk. There are plans to implement simple commands to allow users to reset both caches at any time. This work is in progress.

Currently, Joe is installed and is being maintained using semi-automated approach.

We are working on automated provisioning on Kubernetes and GCP infrastructure.

First appeared in Summer 2019 in Slack channel #database-lab (internal link), Joe quickly received attention from GitLab engineers. As of January 2020, more than 70 people have joined the #database-lab channel, and 49 of them have used Joe to optimize SQL at least once during the last 3 months.

The old chatops tools (allowing to EXPLAIN queries on a production clone, limited to read-only queries lasting not more than 15 seconds) is still being used 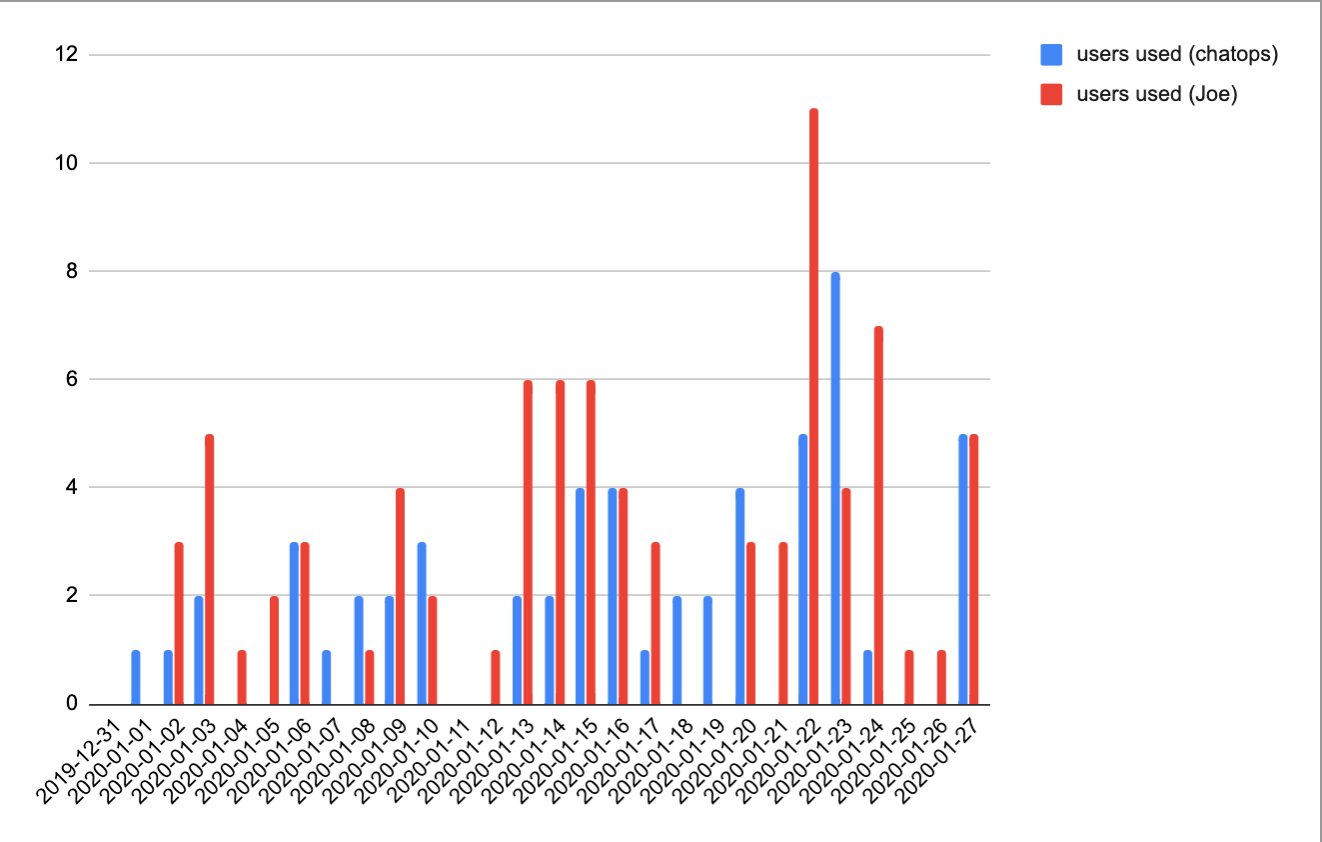 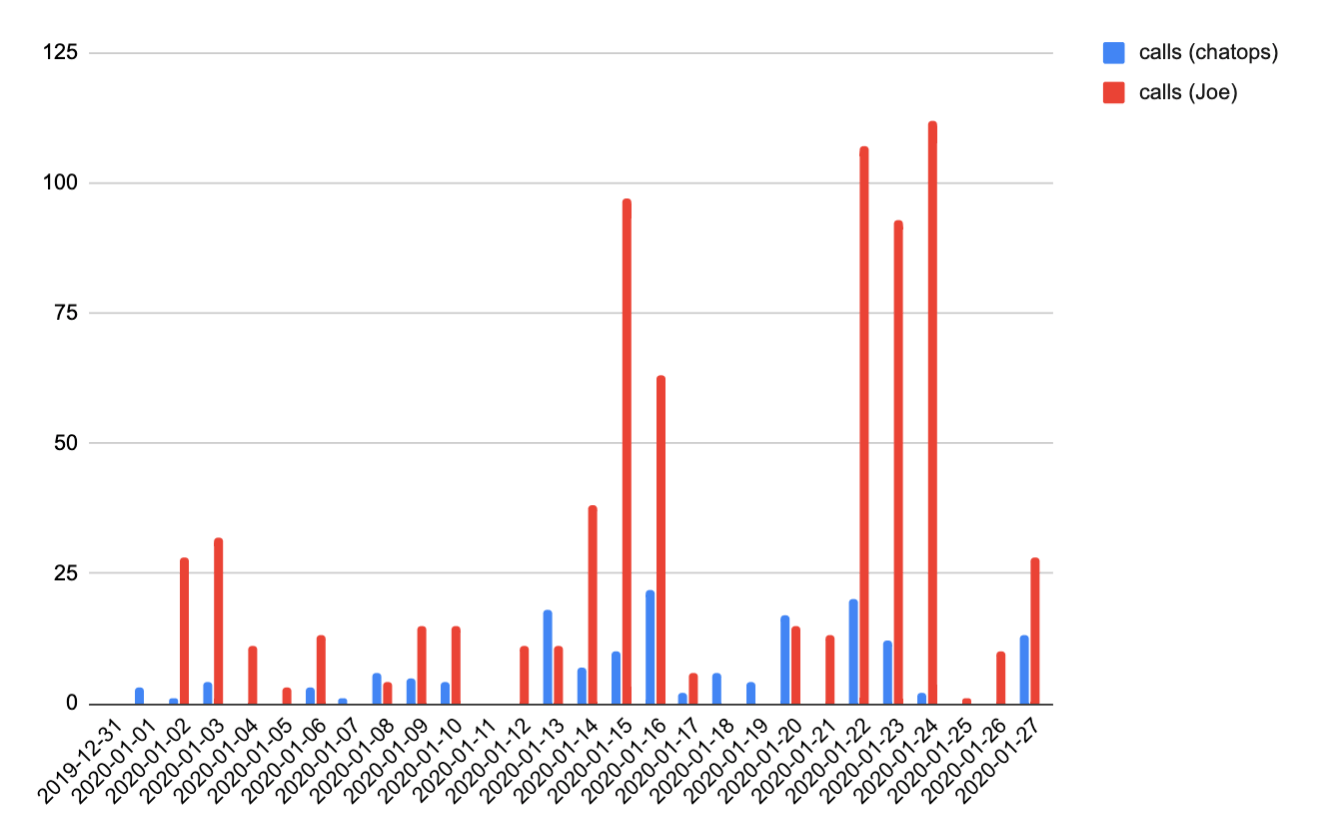