As mentioned in our Security releases blueprint library, the main stake holders involved in the security triage, development and release process have different workflows.

While Security teams workflows do not differ between day to day and security release work, for the Development and Delivery teams the difference is substantial.

At GitLab, Development teams work on public projects by default on GitLab.com.

Development starts from a regular issue on a public project which contains all the research and discussions in the run-up to implementation. When the research is done, a developer will work on a Merge Request (MR) targeting the master branch, which will go through cycles of review. When the review is done, the implementation is ready for merging and is merged by the reviewer. Depending on the milestone in which the implementation was merged, the release with the same milestone will contain the code.

With security fixes however, the workflow changes significantly. Development of security fixes is done across two GitLab installations, GitLab.com and dev.gitlab.org. Projects on dev.gitlab.org are private and accessible only to GitLab Inc. staff. Since those projects only see usage during security releases, a number of items that create one workflow might be missing or are out of date (milestones, labels and similar). User accounts can also have different usernames on dev.gitlab.org (since there is no rule mandating same username across different instances), increasing confusion and delay when needing an action from people involved. Additionally, working across different GitLab instances decrease visibility of work being done by a developer. This workflow is described in the graph below: 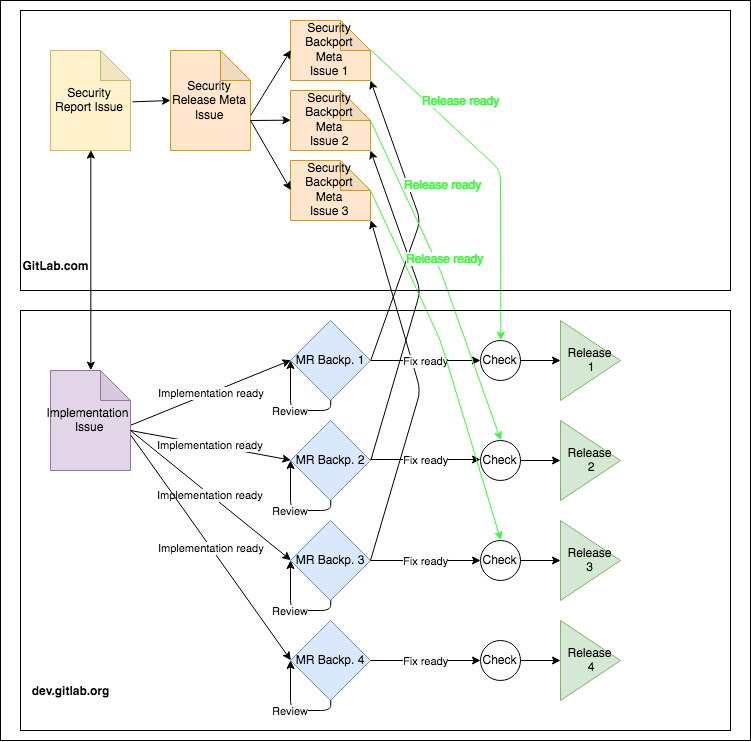 The initial report is triaged in a confidential issue on a public project on GitLab.com, security report issue. The issue is used by a security engineer together with a developer to discuss the potential impact of the security report. The security report is then included in the security release meta issue, which is then used as a coordination issue between Security, Development, and Delivery for each of the impacted version of GitLab and its backports. The meta issue is further broken down into security backport issues per version backported, to be used by the Delivery team for coordinating the individual releases.

The security report issue is used by participating developers to discuss ways of resolving the vulnerability. This is the first point where developers need to switch context between GitLab.com and dev.gitlab.org. They create a regular issue (implementation issue) on a private project on dev.gitlab.org. They now also have to ensure that their local development environment now points to the correct instance (dev.gitlab.org) and to the project with the correct name (for historical reasons, GitLab CE is named gitlabhq on dev.gitlab.org). From here on, they need to create a MR targeting 3 security branches and a master branch for a total of 4 MRs. When the review is done, reviewer does not merge the code, but reassigns to the release manager. This is probably not the last time both developer or reviewer will have to come back to those MRs. Often, these MR's will conflict when merging to security branches requiring additional manual conflict resolution. Developer also has to add a link of each of the dev.gitlab.org MR's to the description of the security release meta issue. This process is repeated by each developer participating in the security release.

Developing only on GitLab.com

A number of these issues can't be resolved easily/quickly, but we can look at what impact removing the context switching between two instances would have. 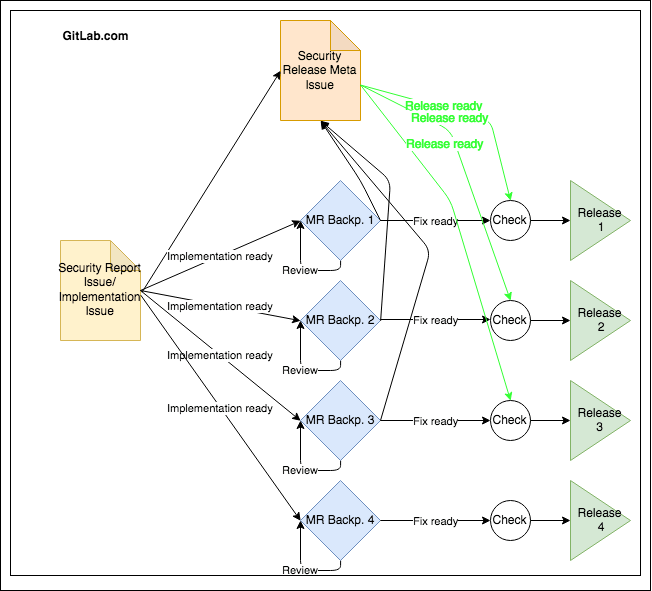 By comparing this graph with the graph showing current security release workflow, a few very obvious savings can be made:

A number of other improvements are instantly gained:

Additionally, automation can be easily achieved when development is done in one location.

Create a new subgroup that will contain repositories used by GitLab, example:

Each of these projects would have a push mirror setup from the canonical repositories. This means that projects in the security group would receive updates only from their source repositories. Mirroring in the other direction would not be enabled. Projects on dev.gitlab.org are also receiving updates from a push mirror on GitLab.com.

Security report issues could be created in these repositories as confidential issues and then moved to canonical repositories when we are ready to open them up to public. This would allow us to localise all security related workflows under a single group.

We can then either reuse @gitlab-bot issue triaging bot or create a new one that would automate and enforce some of the workflows. For example, we could look into having the bot enforce the following:

Summarising the proposed change in the workflows with the table below:

Before the change can be considered, we need to consider compliance and security requirements raised in gitlab-ce/55648.

Comments in issue gitlab-ce/55648 raise a couple of concerns:

Availability during an active incident on GitLab.com

In case GitLab.com is unavailable, or there is a regression preventing use of feature required to develop a fix, we can fall back to the development on dev.gitlab.org or ops.gitlab.net. These would be exceptional circumstances, and in exceptional circumstances it would not be unreasonable to expect that the number of fixes developed at the same time would be in single digits meaning that the impact of workflow changes would be not high.

Development on a separate instance as a defense-in-depth measure

It is reasonable to conclude that developing on a separate instance is a good defense-in-depth measure. One of the challenges we are experiencing is that we are using GitLab to build GitLab, dogfooding all of our features. All of our development workflows are tightly coupled to GitLab.com projects, groups and items. Because of such high dependency on workflows that are on GitLab.com, dev.gitlab.org isolation appears like a good measure.

This is why we need to look into our current workflow dependencies:

Given that this separate instance is exposed to the public internet, the usual tools that would allow better access control such as VPN access and similar means that work separation has limited benefits.

Development of security fixes on a separate instance might also have some drawbacks. We put a lot of effort into making gitlab.com secure. Because we develop critical security fixes on dev.gitlab.org we now need to divide our focus by two instances.

We do not have any data to support a claim that malicious actors determined to get access to 0-day vulnerabilities in GitLab exist, however it might be a reasonable approach to assume that they do exist. Because dev.gitlab.org is a publicly accessible instance, and we are not hiding its existence, we should also assume that malicious actors know that this instance exists, therefore dividing our focus and spending time and effort on making two instances secure, makes a job of a malicious actor easier.

dev.gitlab.org also runs GitLab Community Edition, and does not have some important features available (like push rules, for example).

Disclosure of information due to mistaken @-mentions or overeager auto-complete

Private repositories in GitLab will allow you to only @-mention users who are members of the project or the group project belongs to. This means that the accidental information disclosure is more likely to happen in a public project like gitlab-org/gitlab-ce. The possibility always exists that a feature regression exposes information to unauthorised personnel but that would affect security development the same way it would affect the rest of the confidential/private information stored on GitLab.com for all users (not only GitLab Inc.). Given that we are making GitLab.com ready for mission-critical customer workloads, dog-fooding in these cases also matches the general company philosophy.

Another point is this discussion might be that accidental exposure of confidential information to random users may be less of concern than making it easier for malicious actors to gain access to 0-day vulnerabilities.

How is the process of developing, reviewing, and building a security release isolated from the production load of non-GitLab users and projects?

The isolation is done through project and group permissions. GitLab has three visibility levels for projects/groups and the proposal suggests setting private level for both. With private visibility levels, only project/group member have visibility into the project repositories and metadata. As stated earlier, proposed changes in this document only apply to development and review workflows, building security releases is a separate workflow.

In the event of data breach on GitLab.com, an unauthorised person would be able to gain access to private projects/groups through a security vulnerability inside of GitLab. GitLab.com does not run a special version of GitLab, and that would mean that the breach would be possible for any instance of GitLab exposed to the public internet. dev.gitlab.org also runs unaltered version of GitLab and is exposed to public internet, and due to all our documentation including project names on dev.gitlab.org being public, the same risk applies to a separate instance.

How does the move affect the number of admin and privileged users with access to repository?

With the details provided above with description of the current situation, proposed change in the workflow and the security requirements we need to draw conclusions on whether the proposed change brings additional security risks.

If the change does impose new risks that we (GitLab Inc.) are not willing to take, we need to:

If the change does get approved, Delivery team will start working on migrating the projects and change the process. This change would be done together with Security team as a final approver of the change.