This page lists a number of tips and tricks we have found useful in day to day Quality Engineering related tasks.

While working on the GitLab-QA codebase, it is sometimes helpful to run the GitLab-QA pipeline against a specific release of the GitLab project. This could be due reasons such as that particular GitLab release containing specific code needed for validating the changes made in GitLab-QA. To run a GitLab-QA pipeline against a specific GitLab release, we need to know the GitLab release version created and tagged by the omnibus pipeline. This can be found by either observing the RELEASE variable in any of the package-and-qa test jobs or in the last output line of the Trigger:gitlab-docker job triggered by the package-and-qa job. Here is an example of what the RELEASE string looks like:

Copy this string and create a new GitLab-QA pipeline with a RELEASE variable and use the copied string as its value. Create another variable called QA_IMAGE and set it to the value that can be found in the package-and-qa upstream job. Here is an example of what the QA_IMAGE string looks like:

Note that the string is same as RELEASE except for the -qa suffix on the image name and the tag which is the branch name on the GitLab project.

Now run the pipeline against the branch that has your changes.

It is often needed to test the impact of changes in the GitLab-QA codebase on Nightly, Staging, Pre-Prod, Canary or Production pipelines. This can be achieved by manually triggering a pipeline in any of these projects and setting the QA_BRANCH variable to the branch name you are working on in the GitLab-QA project. As a result, the pipeline will checkout the specified branch and build the gitlab-qa gem instead of using the latest published gem.

To find out the version, revision, branch and package deployed in gitlab.com, staging and canary environments, run this in the #chat-ops-test Slack channel: 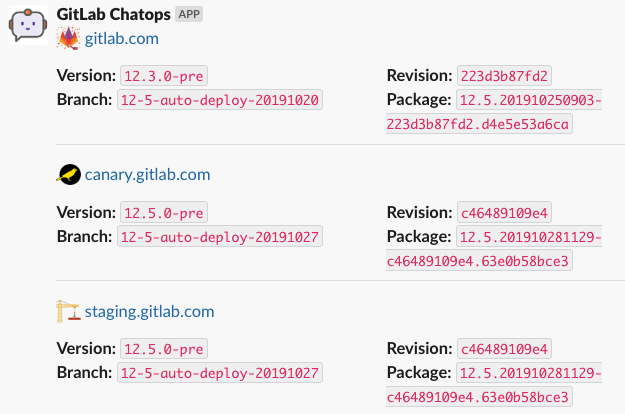 You will need access to the https://ops.gitlab.net/gitlab-com/chatops project to run /chatops commands. Ask to be added to this project in the #development Slack channel.

You can determine the revision SHA deployed on a GitLab instance by either navigating to www.example.com/help, by calling the http://www.example.com/api/v4/version API or by running /chatops run auto_deploy status in a Slack channel such as #chat-ops-test.

You can also determine if your commit has been deployed on a GitLab environment using ChatOps. For example, if your commit ref is 347e530c5b3dec60c0ce2870bc79ca4c8273604d you can run this command in a Slack channel such as #chat-ops-test:

Determine the commit SHA of a nightly image

The commit SHA for a nightly pipeline can be determined in the following ways:

The commit SHA can be determined by visiting the http://localhost/help page after sign-in or by calling the /api/v4/version API where it is displayed as a value of the revision attribute.

By inspecting the pipeline that created the nightly image

You can look at the last pipeline by clicking the pipeline number for CE nightly or EE nightly under the "Last pipeline" column.

In the pipeline view click a job under the "Gitlab_com:package" column. The SHAs for GitLab Components are listed towards the end of the logs. The GitLab commit SHA is displayed as a value of gitlab-rails.

Configure VS Code for gitlab-qa debugging

The Ruby VS Code extension adds a few Ruby-related capabilities to VS Code, including the ability to debug Ruby code.

After you install the extension you can use VS Code to debug end-to-end specs running against your local GDK. You will need to add a Run configuration to launch.json. For example, the following launch.json will add a configuration named Debug Test::Instance::All current file to the list in the Run view of your Sidebar. Then, with a spec file open in the editor you can start debugging (F5) and VS Code will run the tests in the spec file.

You can include multiple configurations, and any environment variables or command line options can be included. For example, here's one that will debug smoke tests while running them on Staging:

Sometimes, it's useful to deploy auto-scaled runners to try out and compare different machine types.

Scripts and tools for automating tasks

The Quality Toolbox contains several scripts that can be useful when working with GitLab end-to-end tests, such as one to generate a report of flaky tests, or one to report job success rates.

The qa/tools directory contains rake tasks that perform automated tasks on a schedule (such as deleting subgroups after a test run), or that can be run as needed (such as revoking personal access tokens).

This script deletes SSH keys for a specific user. It can be executed via the delete_test_ssh_keys rake task in the qa directory.

The rake task accepts three arguments that can be used to limit the keys that are deleted, and to perform a dry run.

For example, the following command will delete all SSH keys with a title that includes E2E test key: and that were created before 2020-08-02 on https://staging.gitlab.com for the user with the provided personal access token:

There is a rake task to set the default password (from Runtime::User.default_password) if it's not set already, and it creates a personal access token.

This is useful when testing on a fresh GitLab instance (e.g., an omnibus-gitlab docker image) and you don't want to have to log in and create an access token manually.