A pilot program has been launched by Legal to test an automated process for the UX Research Team to conduct a prize draw in connection with routine SUS Surveys and other ad hoc surveys which are intended to collect feedback from GitLab users regarding features, navigation, and other items related to improving the user experience. This pilot has been launched based on a request from the UX Research team to be able to have standard rules and be able to launch a new promotional game quickly.

The pilot program features an automated workflow for the UX Research Team to generate rules. This is accomplished through a Google Form and not through a GitLab issue. Provided that the request satisfies certain pre-determined requirements, the requestor will receive a set of Abbreviated Rules almost immediately (minutes to an hour). If the request does not satisfy the pre-determined requirements use of the Promotional Games Legal Template will be required.

As part of launching this pilot, Legal has updated the definitions and wording used in association with promotional games. Please review this section of the handbook to learn about the three types of promotional games which are generally permitted at GitLab.

Benefits of the pilot program:

Proper Administration of the Prize Draw

There is a set of Official Rules which applies for every Promotional Game offered and is permanently hosted here. The Official Rules are structured and formatted so that they apply to every prize draw. The details which apply to a specific prize draw are outlined in the Abbreviated Rules - generated through the automated workflow of the Google form.

Abbreviated Rules will generate upon submission of the Google Form and will look similar to this: 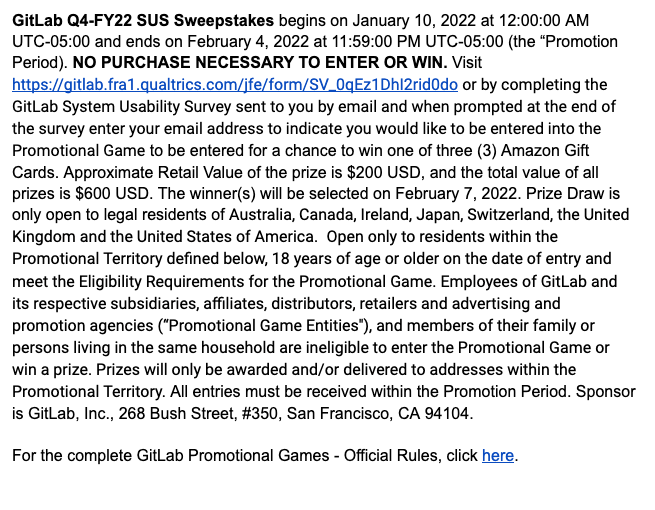