How to Perform CMOC Duties

As the Communications Manager on Call (CMOC) it's your job to be the voice of GitLab during an incident to our users, customers, and stakeholders. To do this you must communicate with them through our status page, Status.io.

The basics of how to create, update, and close incidents in Status.io are covered by their Incident Overview documentation. However, this document covers how we specifically use Status.io to perform those tasks.

You may also be asked to contact a user on behalf of Infrastructure or Security, which may or may not be related to an Incident.

Before getting into the actual process of managing an incident, the following sections should be noted.

How Are Incidents Declared?

Infrastructure uses Woodhouse to declare incidents through Slack. Doing so will:

This information will all be posted to Slack in the #incident-management channel by Woodhouse and it'll look similar to the following example.

GitLab team members are encouraged to use this method of reporting incidents if they suspect GitLab.com is about to face one.

The following should be noted specifically regarding making updates to Status.io.

Once you join the incident Zoom call, take note of any updates that have been made to Status.io and the time they were made at. Set a timer to remind yourself and stick to the time intervals below unless you make a note of how long it will be until the next status update. For example, if you're in "monitoring" it may be appropriate to specify an hour before the next update.

What to do if you don't know what to say

In later sections of this workflow it's called out that at times you should be asking the IMOC of the incident for permission to move an incident between certain states (updating, monitoring, resolving). On the rare occasion that an incident does not have an IMOC, you may ask the EOC instead.

Keep in mind that you can always review past incidents if you need examples or inspiration for how to fill in the details for a current incident.

Whether related to an ongoing incident or not, infra or security may ask you to reach out to one or more users if they detect unusual usage. Please follow the internal requests workflow to log the request.

As the CMOC you'll guide the incident through the following three stages.

The following sections outline how to perform each of the steps within these stages.

The following steps should be taken immediately after receiving a PagerDuty page for an incident.

NB: "Resolved" in PagerDuty does not mean the underlying issue has been resolved.

Before you create an incident in Status.io you should join the Zoom call that will be used by all GitLab team members involved in the incident. A link to the call is provided in the incident declaration by Woodhouse in the #incident-management channel.

Your role as CMOC while in this room is to follow along while the incident is worked and make updates to Status.io either when asked or when it's necessary. Oftentimes chatter in this room will be lively, especially in the early stages of an incident while the source of the issue is being discovered. Use your best judgment on when it's appropriate to speak up to avoid vocalizing at inopportune times. You can always ping anyone on the call through Slack if you need to ask a non-urgent question about the situation.

After logging in to Status.io you should be met with the dashboard that displays various statistics about our current status. A new incident can be created by clicking New Incident along the top bar.

This takes you to the new incident screen where you'll be asked to fill in the details of the incident. The following is an example of what a new incident would look like if we're experiencing an issue with a delay in job processing on GitLab.com.

Title - Titles should be brief and concise. The incident title should answer the question: In simple terms, what is the issue?

Current State - In nearly all cases an incident should be created in the Investigating state. If it's been communicated to you that we're aware of what is causing the current incident this could be set to Identified from the beginning.

Details - In keeping with our value of transparency, we should go above and beyond for our audience and give them as much information as possible about the incident on its creation. This field should always include a link to the incident issue from the production issue tracker so that our audience can follow along.

Incident Status - When creating a new incident this will never be Operational. The status of an incident depends entirely on its scope and how much of the platform it's impacting.

Broadcast - Always check each box in this section.

Message Subject - Always leave this at its default value.

Affected Infrastructure - This should almost always be unchecked so that the value of the Incident Status field is only applied to the specific aspects of the platform that are affected by the incident. In the example above we're only experiencing an issue with job processing so only CI/CD is selected.

The CMOC should make the Community Relations team aware of the incident by mentioning them with the @community-team Slack handle in the #incident-management channel if the following conditions are met.

To update an active incident click the incidents icon from the dashboard.

Then click on the edit button next to the incident.

A ready to be published update should look similar to the following. 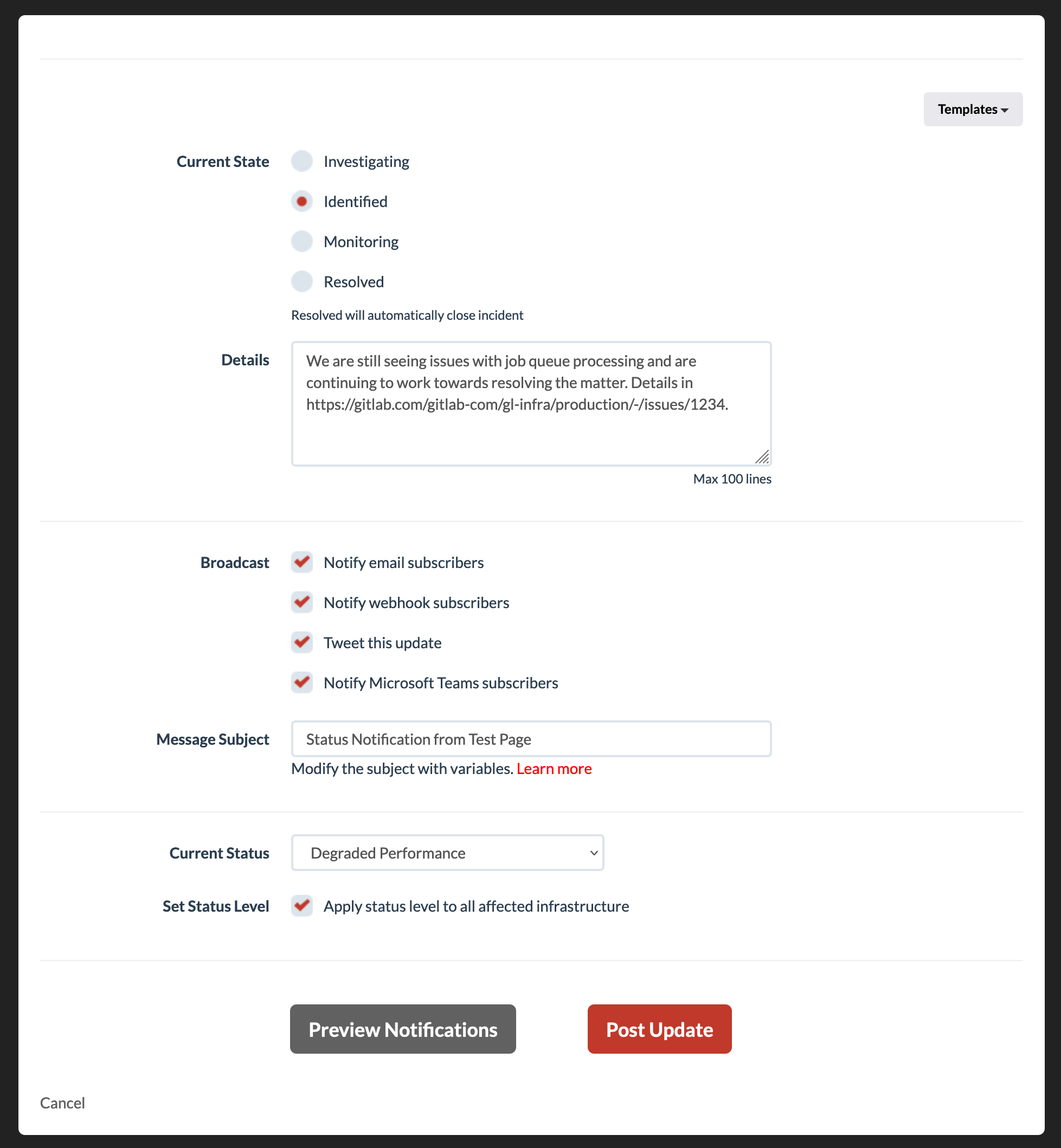 Make sure to verify the update length before publishing it. If it exceeds 280 characters, the update won't be published on twitter with no failure notification from status.io.

Closing an incident out has two stages, Monitoring and Resolved. Once the affected component is back to operating normally a monitoring period should begin where we switch an incident over to Monitoring where it remains open for ~30 minutes to ensure that the issue does not recur. We then mark it Resolved once we're confident the issue will not recur, which closes the incident.

The two stages of the resolution process are covered in their respective sections below.

To start the monitoring period, edit the incident, and configure the update similar to the following. 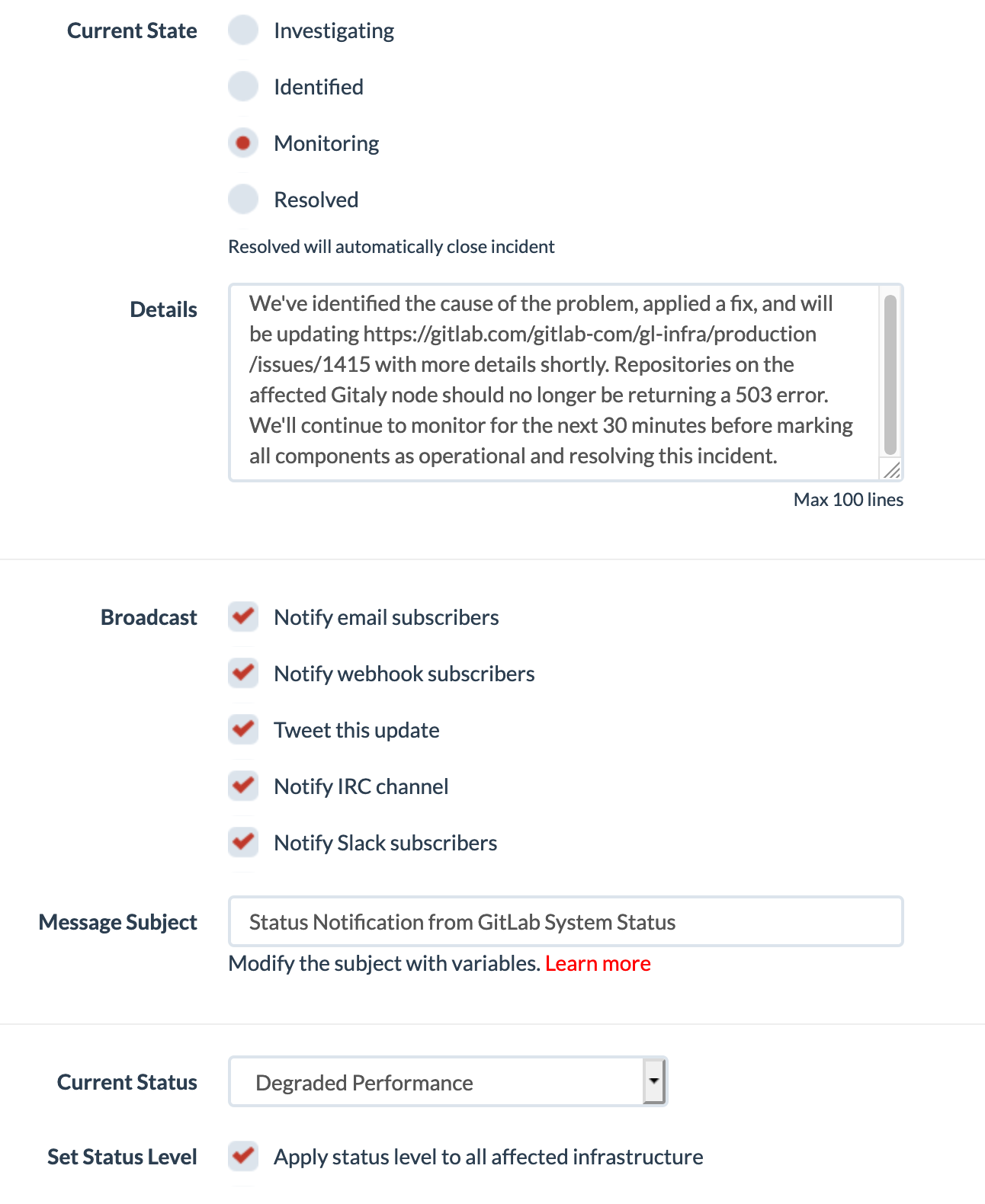 Take special note of the changes made to the following fields at this stage.

Once we're confident that the underlying issue that caused the incident has been fully resolved and a monitoring period has been observed, we should close the incident. Before we do so, we should check with the IMOC via Slack for the all-clear. This should be done by starting a thread on the announcement in #incident-management that started the incident and mentioning the IMOC in it. The following is what one of these messages looks like. 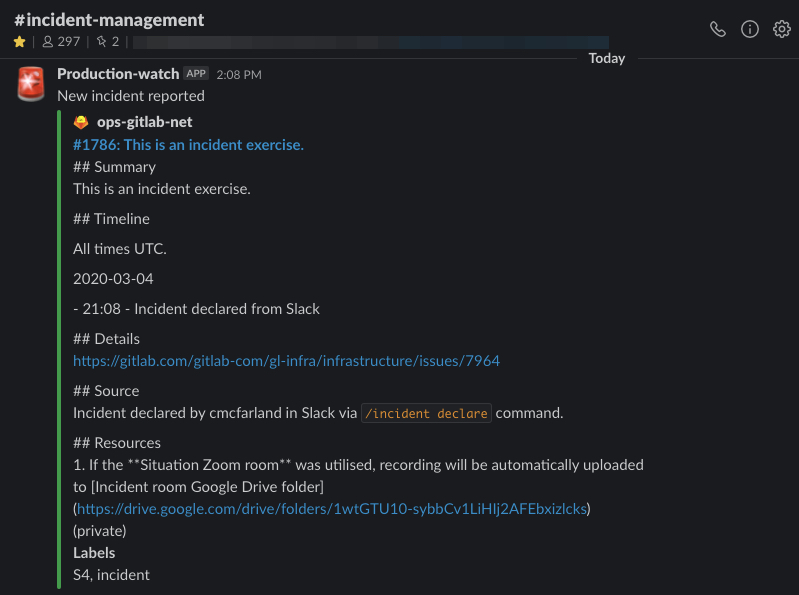 Once we have confirmation from the IMOC that the incident can be resolved, make an update to the incident and change the following fields.

Before resolving the incident your draft should look similar to the following: 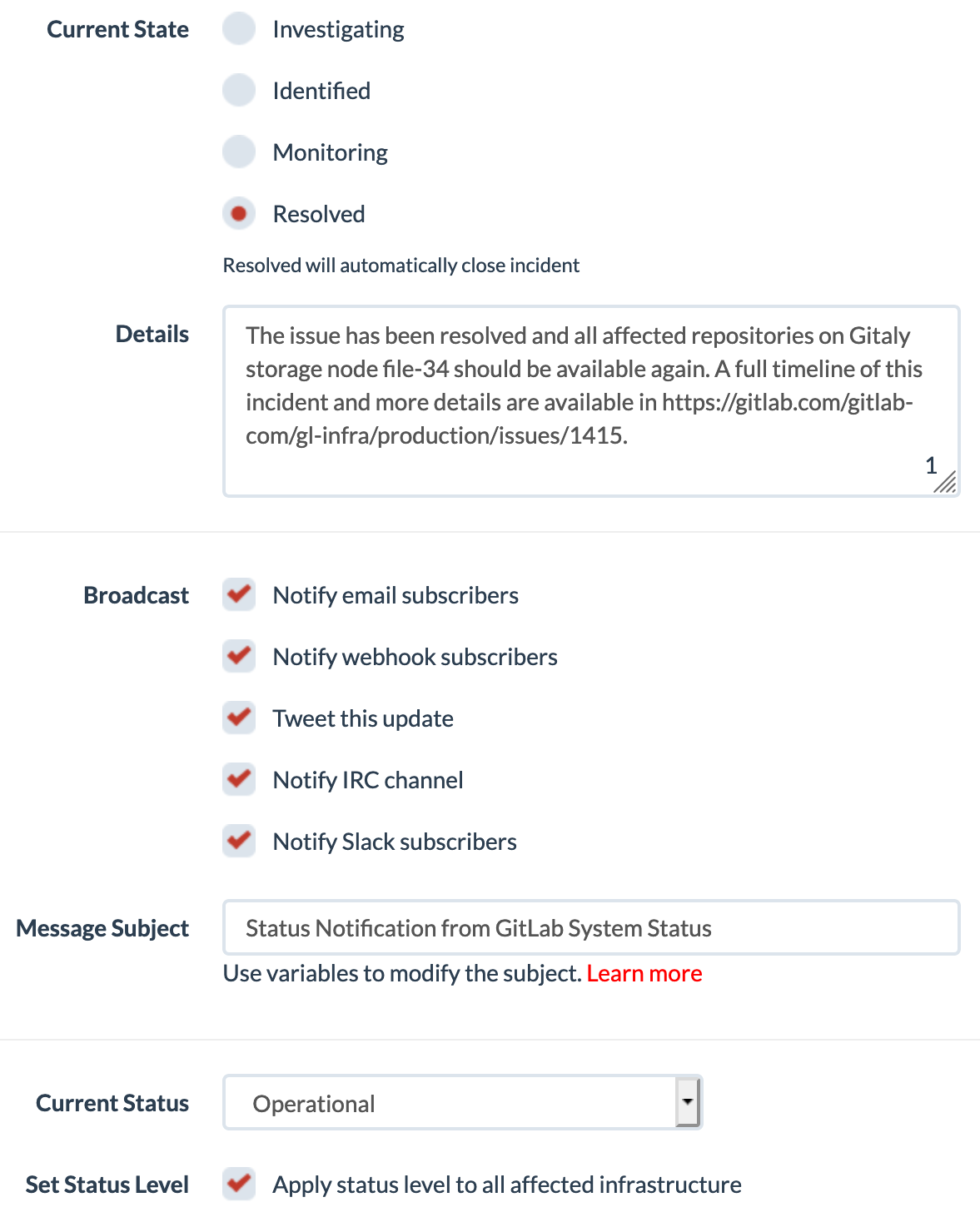 A review will be conducted by production engineering for every incident that matches a certain criteria. Status.io allows us to add a link to a post-mortem after an incident has been resolved which will then be viewable on our status page for that specific incident.

Do the following to add a post-mortem to a resolved incident:

Infrastructure will at times plan scheduled maintenance events for GitLab.com, some of which will directly impact users. New maintenance events are announced as issues created in the gl-infra/production issue tracker using the external_communication.md issue template accompanied by the Scheduled Maintenance label.

To create a new maintenance event, click New Maintenance from the Status.io dashboard.

The contents of the maintenance should be filled out according to the details provided in the maintenance issue. Once complete, it might look something like the following.

After the maintenance has been created, be sure to include it in your handover to the next on-call CMOC in the Maintenances section.

If handover occurs during an active incident where the quick summary you'd provide in the handover issue is insufficient to properly prepare the incoming CMOC of the situation, you are encouraged to start up a quick Zoom call in the #support_gitlab-com Slack channel with the incoming CMOC. Slash commands such as the following can be used to expedite getting the meeting setup.

The CMOC Shadow Schedule can to be used by people who wish to shadow the CMOC as a learning process before acting as CMOC. A soon-to-be-CMOC can adjust the schedule to match their working hours by clicking Edit this schedule > Add Another Layer; add your username, and the days/hours that you wish to shadow.