For an understanding of what this stage ecapsulates, take a look at the product vision.

For an understanding of our UX Vision and Strategy, take a look at the Release UX Strategy.

Check out our Release Stage Vision:

We are working toward creating 3-year vision mock-ups to effectively orchestrate features across Release Management and Progressive Delivery. This method has several advantages:

These vision mocks are a journey and will produce living assets. This is roughly an 8-10 week process with focused on delivering high-fidelity designs for future product functionality or user experiences. The steps we follow are:

Tip: For stage wide visions, try to think of user flows that work across categories and showcase the end to end functionality of GitLab

Step 3: UX Designer will story board the user flow

Step 6: Product Management merges screen shots of mocks to Direction Page and creates a walk through of mocks for Sales Enablement

From Amplitude's North Star Metric handbook, a north star metric is a single leading indicator for performance of a product. Typically this can be tracked as a stage monthly active user SMAU.

The Release Management & Progressive Delivery teams are prioritizing features that will drive count of deployments from GitLab.

Release Management is about unblocking users as they continuously deliver value to their customers. A part of this can be seen in how users create Release tags to track production deployments and in that adoption of the Release features, users are deploying more with GitLab. We can also see a correlation between users adopting Releases to deploy with GitLab and leveraging more paid features.

Progressive Delivery is about the process of pushing changes to a product iteratively. The ultimate goal is to improve delivery times for new features and mitigate risk by controlling the audience that is exposed to them. This can be seen by users that use feature flags and advanced deployments as part of their Continuous Delivery pipeline. We can also see Continuous Delivery as an entry point to downstream stages, such as Configure and Monitor.

Our SSOT for tracking this adoption is in the Release Stage Dashboard.

We expect to track the journey of users through the following funnel: 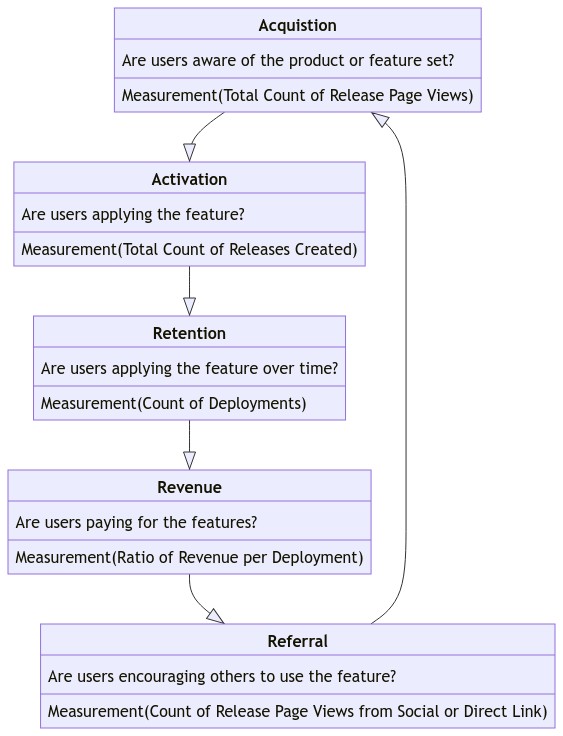 We completed the implementation of Stage Monthly Active Users in gitlab#882.

Progressive Delivery GMAU will be instremented as part of product#1416 and are detailed in the Ops Section Product Performance Indicators .

The Release Stage is focused on all the functionality with respect to Continuous Delivery and Release Automation.

The following people are permanent members of the Release Stage:

The following members of other functional teams are our stable counterparts:

Like most GitLab backend teams, we spend a lot of time working in Rails on the main GitLab CE app, but we also do a lot of work in Go which is used heavily in GitLab Pages. Familiarity with Docker and Kubernetes is also useful on our team.

How to work with us

Issues that contribute to the release stage of the devops toolchain have the ~"devops::release" label.

The Stage's primary Slack channel is #s_release, and the public managers channel is #release-managers. We also support a number of feature channels for discussons or questions about a specific feature area. We no longer support issue specific channels, as they are easy to lose track of and fragment the discussion. Supported channels are:

We use the Release Team Workflow board to plan and track features as they make their way from idea to production. This board details the various stages an issue can exist in as it is being developed. It's not necessary that an issue go through all of these stages, and it is allowed for issues to move back and forward through the workflow as they are iterated on.

Below is a description of each stage, its meaning, and any requirements for that stage.

In order to make sure sprints are effective as possible, it is important to ensure issues are clearly defined and broken down before the start of a sprint. In order to accomplish this, engineering evaluation will take place for issues that require it (small changes and bug fixes typically won’t require this analysis). Engineers will look for assigned issues with the workflow::planning breakdown label that have user stories defined, as well as functional, performance, documentation, and security acceptance criteria. See Build phase of the Product Development Workflow.

Assigned engineers will work with Product, UX and other engineers to determine the implementation plan for the feature.

Once an implementation plan has been finalized, the following steps should be taken:

Merge request count as a measure of issue weight

As a byproduct of the engineering evaluation process, a rough estimate of the number of merge requests required to develop a feature will be produced. This measure can be used as a way to determine issue weights. These weights can be useful during the planning process to get a rough gauge of how many features can be worked on in a milestone, and to understand how much work the team can do in a milestone. This metric also aligns with the throughput metric currently measured by engineering teams.

Tips: A feature behind a feature flag will have a minimum weight of 3 to 4

Documentation for a feature is expected to be available when the feature is itself available. However, feature flags should not be removed until the feature has been released widely and shown to behave as expected. That means the steps are at a minimum:

To reduce this number, if the changes to code are small, the documentation can be added in the same MR as the feature flag, behind the same flag or in the frontend MR, if it too is small enough.

Tips: When you're having hard time to estimate MR count, consider PoC step.

If you have no idea where to begin the development due to lack of knowledge on the context or you're less confident on the current technical proposal, it might be better to work on Proof-of-Concept MR (PoC or Prototype) at first. This gives you more insights on the current implementation details and potential required changes.

This step removes a lot of "if"s from your assumptions. When you're making a technical proposal, often you don't have enough time to investigate the actual implementation details. In such case, you're assuming like "Probably, this feature works like …" or "Probably, this feature and that feature are connected like …", which leaves some probability in your development plan, and if it turned out a wrong assumption, you may need to rethink the whole approach, even though you're at the middle of development cycle. PoC step derisks such a turnaround by cross-checking the technical proposal with domain/performance/security experts and UX/PM.

Here is how to work on PoC step:

Technically, if you've done a PoC step, there is no need to ask additional reviews in actual MRs as long as you don't change the feature behavior. You can simply focus on general engineering review or documentation review, only. For example, improving code quality, refactoring code, writing tests, writing documents, etc.

Here are the examples of PoC step. Example 1, Example 2

Issue template for a feature development

This is an issue template for feature development. It includes some important engineering tasks to be done in general.

This is an issue template for feature evaluation. It includes some important engineering tasks to be done in general.

When you enable a feature via feature flag and expect a significant impact on user workflow or production load, you should create an issue with the following template to communicate better with the affected users or SRE.

Code reviews follow the standard process of using the reviewer roulette to choose a reviewer and a maintainer. The roulette is optional, so if a merge request contains changes that someone outside our group may not fully understand in depth, it is encouraged that a member of the Release team be chosen for the preliminary review to focus on correctly solving the problem. The intent is to leave this choice to the discretion of the engineer but raise the idea that fellow Release team members will sometimes be best able to understand the implications of the features we are implementing. The maintainer review will then be more focused on quality and code standards.

This tactic also creates an environment to ask for early review on a WIP merge request where the solution might be better refined through collaboration and also allows us to share knowledge across the team.

Since we are a remote company, we utilize a Slack plugin called Geekbot to coordinate various status updates. There are currently 3 status updates configured in Geekbot, one is weekly and two are daily:

The Weekly Status Update is configured to run at noon on Fridays, and contains three questions:

The Daily Standup is configured to run each morning Monday through Thursday and posts to #g_release Slack channel. It has just one question:

The optional Daily Social is configured to run each morning and posts to #g_cicd_social. It has just one question: