The below page includes a deep-dive into the definition of ARR at GitLab and is a sub-page of the Sales Term Glossary Page.

GitLab defines ARR as the annual run-rate revenue of subscription agreements from all customers in a given month. GitLab calculates ARR by taking the monthly recurring revenue, or MRR, and multiplying it by 12. MRR for each month is calculated by aggregating, for all customers during that month, monthly revenue from committed contractual amounts of subscriptions. ARR and MRR should be viewed independently of revenue, and do not represent GitLab's GAAP revenue on a monthly or annualized basis, as they are operating metrics that can be impacted by contract start and end dates and renewal rates. ARR and MRR are not intended to be replacements or forecasts of revenue. ARR and MRR calculates subscription fees normalized to a monthly value, and does not include one-time or usage fees.

We snapshot ARR on business day 4.

The change in annual recurring revenue (ARR) from one period to the next.

Note: Delta ARR is not currently a metric that we can use for operational purposes including planning, compensation or as a KPI. We are documenting assumptions to enable a transition to Delta ARR from iACV when our systems are processes are ready to support that move.

When looking at a time horizon of the next twelve months Delta ARR will equal IACV except:

The Net ARR value of deals booked in a specific period. It is the bookings equivalent to Delta ARR.

When looking at a time horizon of the next twelve months Net ARR will equal IACV except:

As Net ARR is a bookings metric, the period it represents is based on the Close Date of the Opportunity.

Net ARR is tracked in the Net ARR field located on the Opportunity in Salesforce.

The Booked ARR value of a deal includes its renewal amount and its Net ARR. It is the bookings equivalent of ARR.

Example: A customer with a $100k ARR subscription renews at $130k the following year.

Booked ARR also includes multi-year bookings where the ARR renews even if the deal is not officially up for renewal.

Note: Net ARR and Booked ARR are being developed along side ARR and Delta ARR and is not currently a metric that we can use for operational purposes including planning, compensation or as a KPI. We are documenting assumptions to enable a transition to Booked Net ARR from iACV when our systems are processes are ready to support that move.

A measure of changes to ARR compared to the prior month, fiscal quarter, or year. While retention calculations measure changes compared to the same period in a previous year, we also need to measure changes over smaller time periods (month-to-month and quarter-to-quarter) to make real-time business decisions and evaluate the immediate impact of our programs and initiatives. While the net and gross retention metrics are externally reported, corporate metrics, the month-to-month and quarter-to-quarter ARR changes reporting is used for internal analysis. ARR changes are reported at the parent account level, with drill down capability to see account level detail.

The reasons for changes to Delta ARR can happen in combination, such as a change in tier and a change in quantity of seats at the same time. When this happens, the reporting will attribute a specific dollar value of contraction or expansion ARR to each reason. The attribution methodology gets more complex when there are two or three reasons for the ARR change. This analysis framework can also be used to calculate counts of customers that fall into each Delta ARR and Reasons for Delta ARR bucket.

Here are the combinations of reasons that ARR change can be attributed to:

Here are examples of ARR changes when there are two reasons for the change: 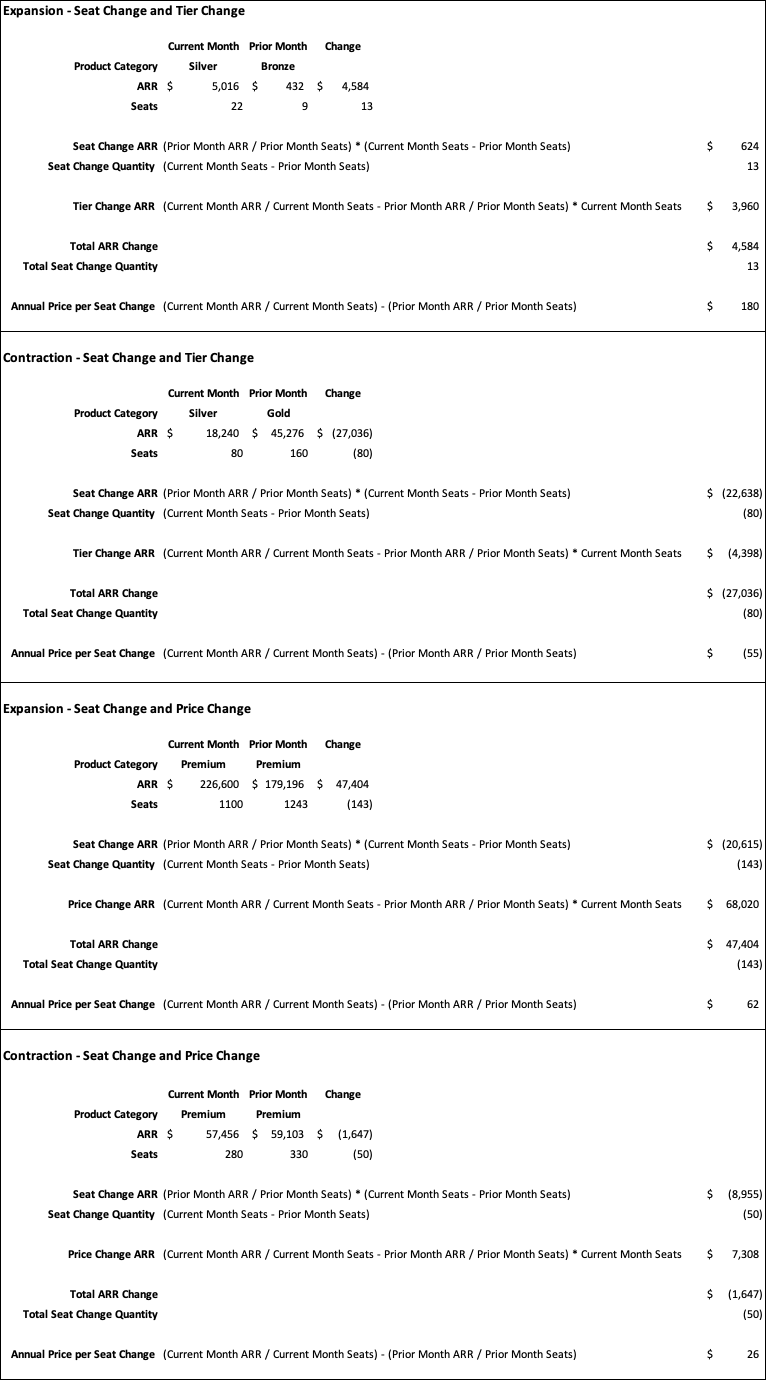