GitLab 8.17 released with GitLab Pages in GitLab CE and Squash on Merge

For many years, content management systems (CMS) have been used to manage simple websites. The advent of static sites allows organizations to no longer worry about having to secure, update and maintain an underlying CMS. Static websites are fast, yet powerful and seen as the next big thing in publishing to internet.

GitLab 8.17 allows anyone to easily create and collaborate on a static website through GitLab Pages, now available in GitLab Community Edition.

In addition to Pages moving to CE, we've made improvements to Issue Boards, added an audit user role, added the ability to squash commits on merge and much more!

This month's MVP is Horacio Sanson. Last release, Horacio added PlantUML support for Asciidoc; this release, he added it for Markdown, too! Thanks Horacio!

Hardcoded static websites take a long time to set up and maintain for everyone but the invested web developer. Static Site Generators are the best solution to this problem. GitLab Pages allows you to host static websites straight from GitLab, with any Static Site Generator. Previously this functionality was only available on GitLab.com and GitLab Enterprise Edition. After receiving over 100 votes we decided to move GitLab Pages to GitLab Community Edition.

Static websites are much faster than their dynamic counterparts (CMS), this makes them great for high volume public marketing and documentation sites or even as a way to easily visualize data from your continuous integration suite.

The GitLab Pages documentation covers everything from getting started with different Static Site Generators to advanced CI and SSL configurations. To learn how to set up GitLab Pages to your own GitLab instance, read through the admin documentation or watch the video tutorial.

Prior to 8.17, the Backlog list in the Issue Board contained issues that you had not yet added to your workflow (the "main" area of the board). Finding issues to add was somewhat difficult given that small area, and you could only add them one by one. Most of the time, you didn't even need to see the Backlog list at all, and it was just hanging around taking up valuable screen real estate. 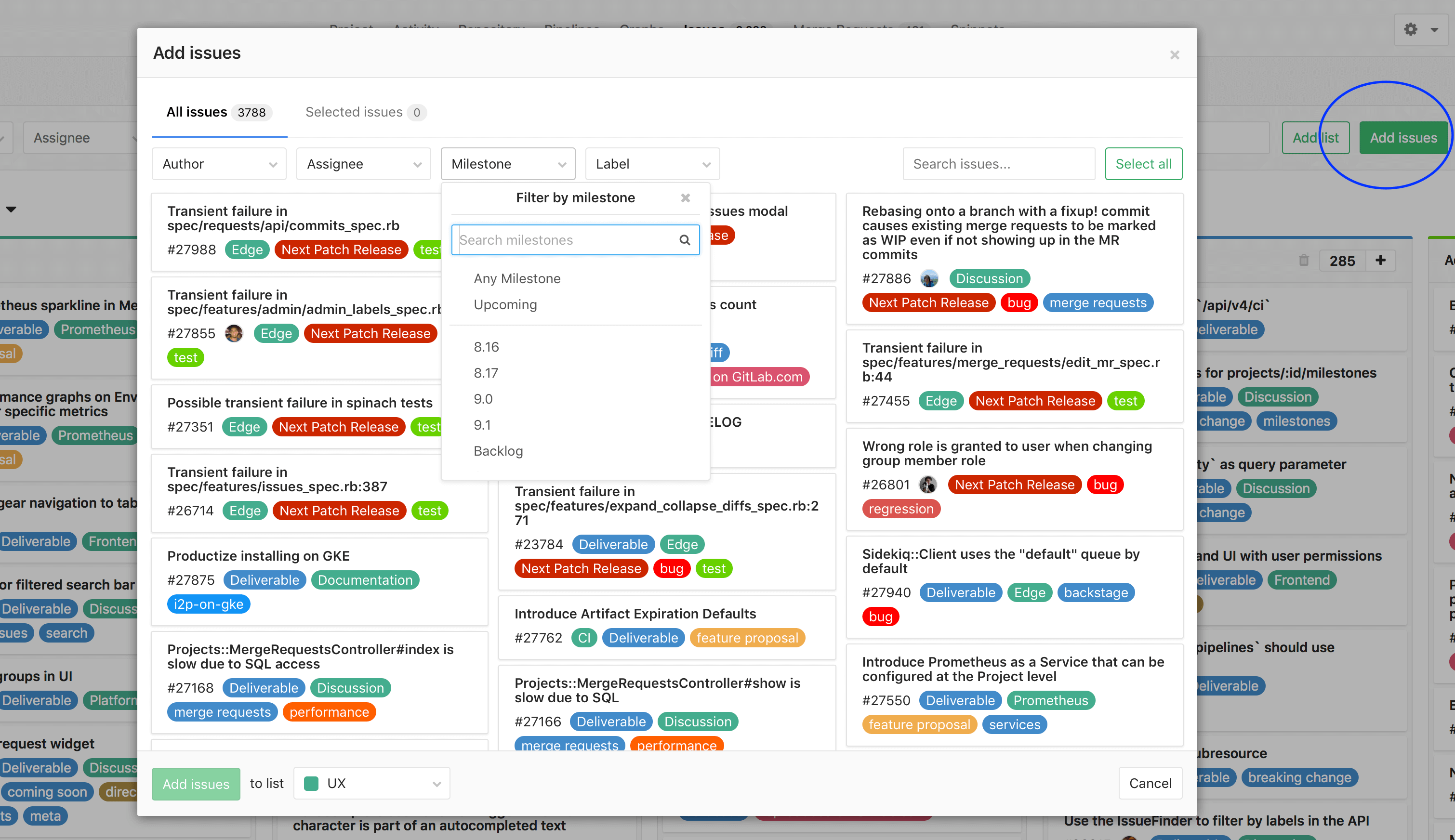 With 8.17, you now add issues through a dedicated modal window. Click the Add issues button at the top-right, and you get an expansive modal to search and filter for issues you care about. Select one or many issues, and even choose the list where you want to put them in before adding them to the board, saving just a few more clicks and drags. To remove an issue from your board, select it to bring up the sidebar, and hit Remove from board.

Take a look at the Issue Board documentation to learn more. 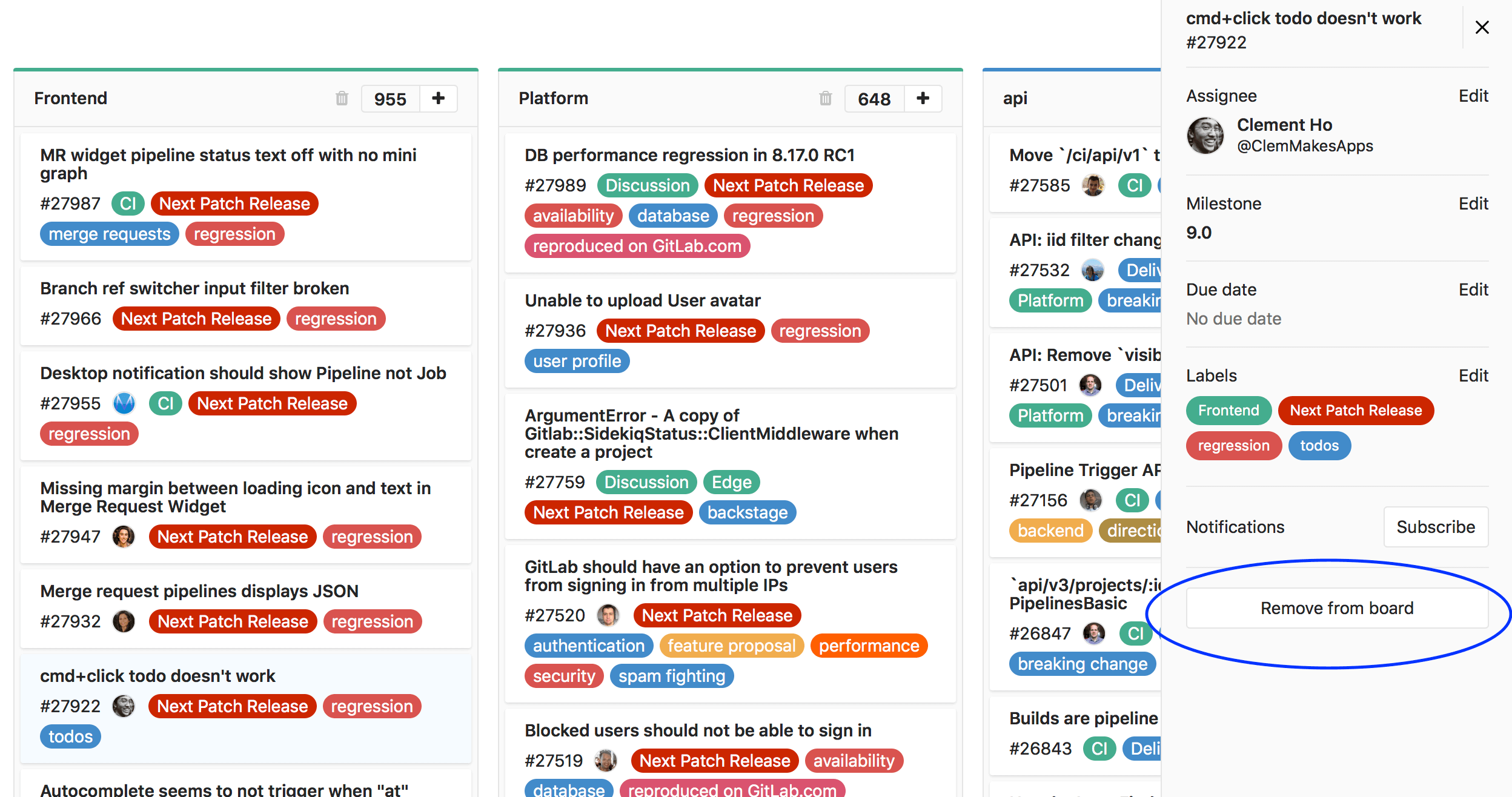 To improve code collaboration, we suggest teams share their merge requests as soon as possible in WIP form. This naturally results in many commits as the merge request evolves. With 8.17, you can now squash your commits together into a single commit, as part of merging, giving you a much cleaner Git history. Simply select the option in the merge request itself.

See our documentation to learn more about squash and merge.

GitLab Flavored Markdown (GFM) is a powerful system, but transcribing formatted text to it may be a little bit difficult for newcomers to Markdown. You may find yourself going to the edit mode of an issue description or comment to just copy the plaintext GFM, paste it in another GitLab textarea, make some changes, before submitting it.

With 8.17, you can simply copy any issue / merge request description / comment (i.e. GFM textarea) in regular view mode, and paste it in another GFM textarea. All the formatting is carried over automatically. This even includes links and images. Pro tip: Now you can quickly learn from GFM experts by copying their issues and merge requests.

GitLab Review Apps are great for previewing changes in a merge request by providing a link to a temporary environment running the changes. But when a change is buried in your application's interface, you still have to navigate to a specific place to see an actual change.

With the new ability to deep link files in a merge request to live previews of those files, you can now jump directly to the URL that shows off the changes in a given file.

Using the new .gitlab/route-map.yml file, you can map routes to their respective URLs to allow for easy preview of specific changes. This is more difficult for dynamic apps built with frameworks like Rails or Django, but for static sites this is perfect.

For example, this is the current route-map.yml for about.gitlab.com:

We are continuing to streamline project settings and navigation, which we first started in 8.16. We've combined the existing Runners, Variables, Triggers, and CI/CD Pipelines menu items into one item simply called CI/CD Pipelines. Navigating to CI/CD Pipelines will show you one page with all the settings that were previously spread across the 4 original pages.

As we work on merging settings together, we are also working to improve the UX of these pages in order to make it easier to navigate. Contribute to the issue and watch for updates in the upcoming releases! 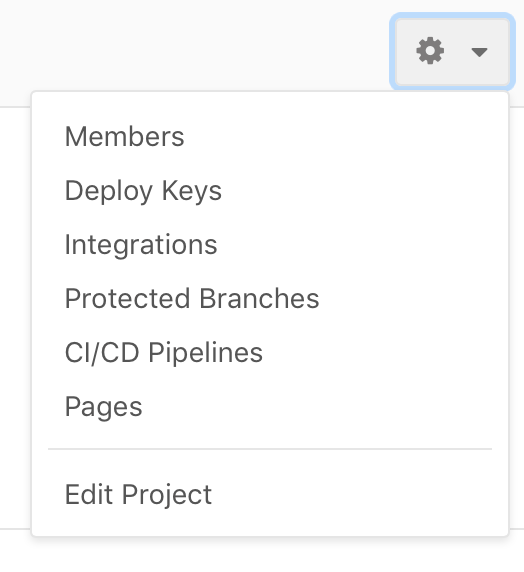 We have made improvements to the look and feel of the Merge Request workflow, as well as included additional details on the CI/CD Pipeline status. You are now able to easily review the progress of the entire Pipeline, and take action directly from the Merge Request summary. For example you could review a pipeline that needs attention, navigate to a failed job, and trigger a quick retry or manual action.

The ChatOps message replies for Slack and Mattermost have been improved. GitLab's replies will now include additional details like assignee, current status, and more; all presented in a cleaner interface. Searching GitLab or creating a new issue all within the context of the channel you are working in has never been easier or prettier!

We have clarified the terminology used to discuss parts of CI/CD, replacing the usage of Build. In 8.17, Pipeline will be used when referring to the entire pipeline, and Job will be used for a specific action.

With the upcoming 9.0 release API v4 will utilize the new naming convention, with v3 remaining unchanged.

With 8.17 we are continuing to build upon our Prometheus integration initially released in 8.16. Three new exporters have been added to the Omnibus package providing insight into Redis, Postgres, and GitLab service metrics. Administrators will now be able to track the status of Sidekiq jobs, Redis, and important database metrics. It is now easier than ever to ensure GitLab is feeling good and snappy!

GitLab has a powerful API that allows you to do almost everything that you'd otherwise do through the interface. For the last several years, our API has been version 3 (v3). To be able to make changes to our existing API endpoints, while maintaining support for your integrations, we're rolling out a new API version next month (March 22nd, GitLab 9.0).

With this release, we're giving you access to the Beta of API v4. This will allow you to upgrade your integrations so that they'll continue working after we deprecate API v3. We'll continue working on API v4 and will introduce other changes with GitLab 9.0, such as:

API v3 will be deprecated with GitLab 9.0. That means API v3 will only receive bug and security fixes from that version on, but no further updates and will not support new features.

We recommend that you update your integrations with GitLab's API to v4.

We plan to remove API v3 from GitLab in a future release, but not before GitLab 9.3. For detailed information on the deprecation and removal of API v3 see our issue on GitLab.com.

Many large or regulated organizations require oversight across the entire development environment. GitLab Enterprise Edition now features a great new capability to assign an Audit role to a user. This role allows the user read-only access to all projects, groups, users and other resources.

Unlike the Administrator role, Audit users don't have the ability to modify projects settings or access the Admin Area, making it the perfect solution to provide powerful, read-only access across the entire GitLab instance.

Find out more about how this role works and the capabilities it allows.

Repository mirroring is a great feature in GitLab Enterprise Edition that allows you to synchronize remote repositories with your repository on GitLab. Previously, synchronization happened every hour; you can now adjust this for more fine-grained synchronization windows.

For 8.17, we merged 62 merge requests from the community, including new features, bug fixes, and backstage improvements!

The most noticeable contributed changes are as follows:

We are also releasing GitLab Runner 1.11 today. Most interesting changes:

To see the full list of all changes please read the Runner's CHANGELOG file.

As mentioned in the 8.15 release post, omnibus-gitlab packages are equipped with gitlab-ctl pg-upgrade tool. This tool will upgrade the bundled PostgreSQL database version.

The omnibus-gitlab packages for GitLab 9.0 will attempt to automatically upgrade your database. Additionally, default version of PostgreSQL will change for GitLab 9.0.

Read more about database upgrade in our docs

Ran into issues? Create an issue at the omnibus-gitlab issue tracker, and reference it in the upgrade problems meta issue.

We're deprecating support for Git-Annex available in GitLab Enterprise Edition, and it will be completely removed in the upcoming release, GitLab 9.0 (2017/03/22).

Read through the Git-Annex to Git-LFS migration guide.

8.17 will be the last release with support for Raspbian Wheezy Raspberry Pi2 packages. GitLab 9.0 will continue to be available on Raspbian Jessie.

Due to a migration to new build infrastructure, several months ago Raspberry PI packages started being released under debian distribution of raspberry pi2 repository. This was not the original intention and in the following months users needed to do a manual change in their package repository sources to fetch the latest package. With 9.0 we will deprecate the debian distribution and move back to raspbian which was the previous default.

GitLab CI standalone was merged into GitLab application with version 8.0. We shipped configuration that helped users migrate their infrastructure to the new situation. With GitLab 9.0 omnibus-gitlab package, we are removing all support for standalone GitLab CI. If you still make use of configuration such as ci_external_url and redirecting traffic to the old address, please update your configuration in time.

This release does not require downtime.

Some of the migrations could take some time and on larger instances, it may be advisable to take approximately 15 minutes downtime to ease the load of the database.

The slow migrations add columns with default values to users and projects.

By default, GitLab will stop, run migrations and start again. See the note below on changing this behavior.

Upcoming changes to defaults in .gitlab-ci.yml

As part of our 9.0 release, we will be changing the default behavior of two flags in .gitlab-ci.yml to provide an improved standard experience.

New configuration options got introduced in the omnibus-gitlab packages. To check what changed when compared to your /etc/gitlab/gitlab.rb configuration file, run sudo gitlab-ctl diff-config.