A new season is in, and so is GitLab 7.12! This month's release brings some big additions and changes to Community Edition (CE), Enterprise Edition (EE) and Continuous Integration (CI). In both CE and EE, GitLab now supports authentication using SAML! This was requested by many and we're very happy that CERN was so kind to contribute this. In GitLab Enterprise Edition you can now require multiple people to approve a merge request before it can be merged. In GitLab CI, we're introducing the .gitlab-ci.yml file, making job scripts much easier to manage.

This month's MVP was an easy choice. Alexandre Lossent from CERN (where the web was born) contributed the SAML code they wrote for their own usage. We're very happy with this contribution and are sure many of you will make use of this. Thanks Alexandre!

With Alexandre's contribution, GitLab can now be configured to act as a SAML 2.0 Service Provider. This allows GitLab to consume assertions from a SAML 2.0 Identity Provider (IdP) such as Microsoft Active Directory Federation Services to authenticate users.

See our documentation on how to set up SAML integration.

There is a new webhook available that will trigger on all comments. You could use this to add additional automations and integrations to GitLab. For instance when someone comments on a merge request, you can have it trigger internal systems or, depending on the comment contents, run a certain build.

Better performance for the Web Editor

Every new release of GitLab is faster than the last, but in this release we did something special. Instead of performing code changes via the web interface by cloning the bare repository to a temporary location, committing there, and then pushing the changes back to the bare repository, we now commit your changes directly into the bare repository. This has significantly improved the performance of the web editor.

Every month we experiment and tune our UI to be better, prettier and more intuitive and this month is no different.

We've moved your profile link to the bottom left and updated the looks of various parts of the UI. 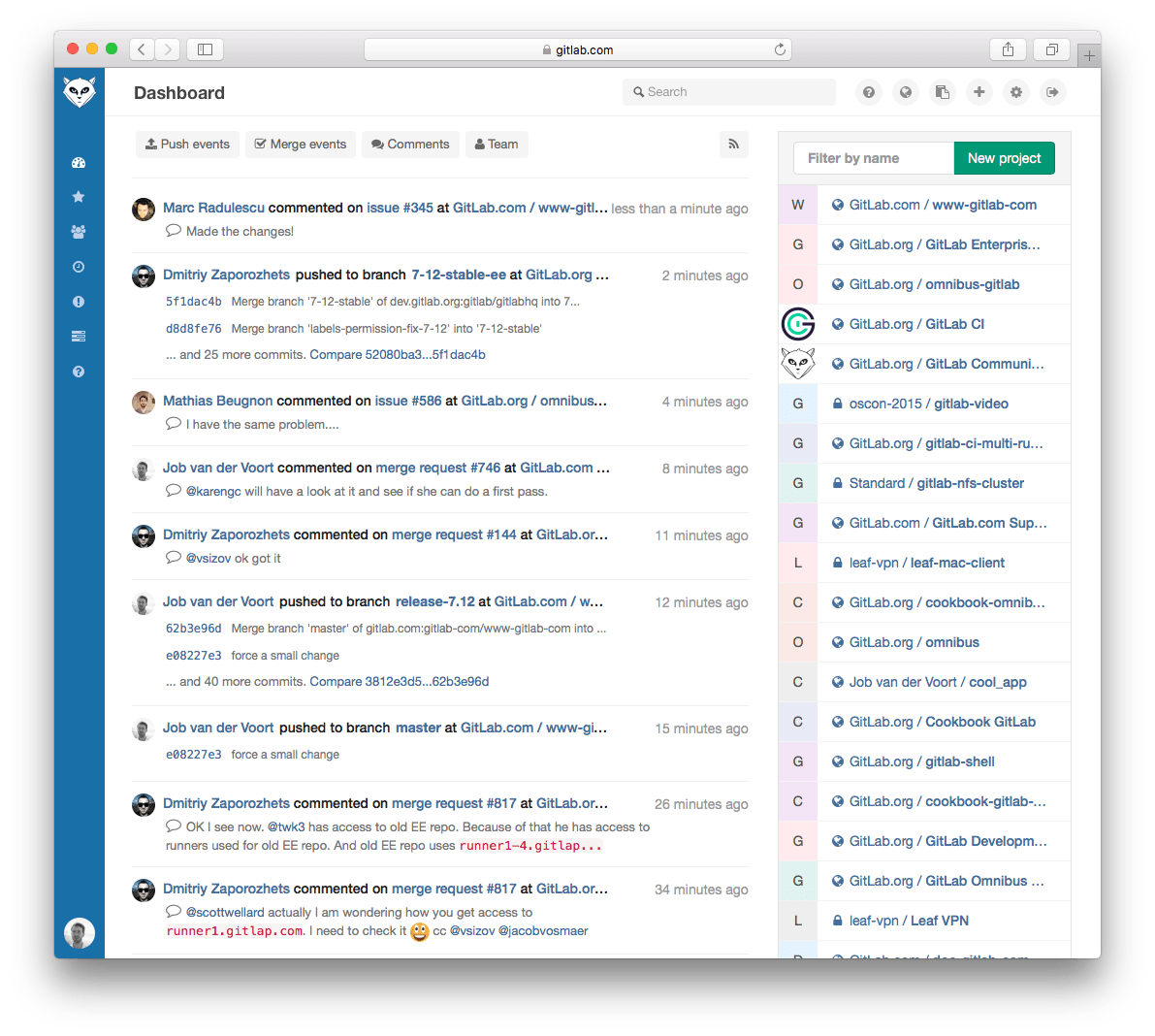 If you want to make sure that merge requests on your favorite project are reviewed by more than one person before they are merged, you can now configure a minimum number of Merge Request approvals for it. 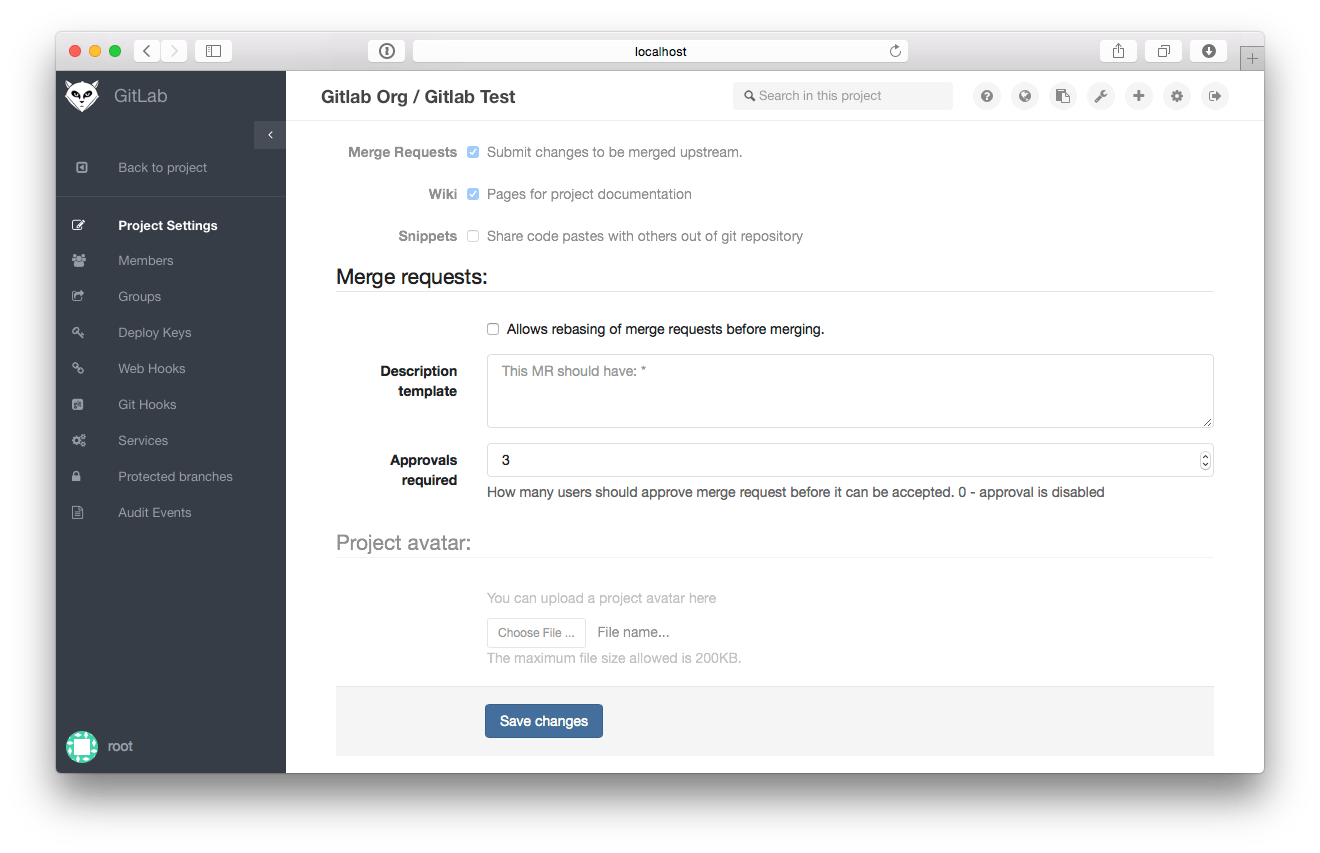 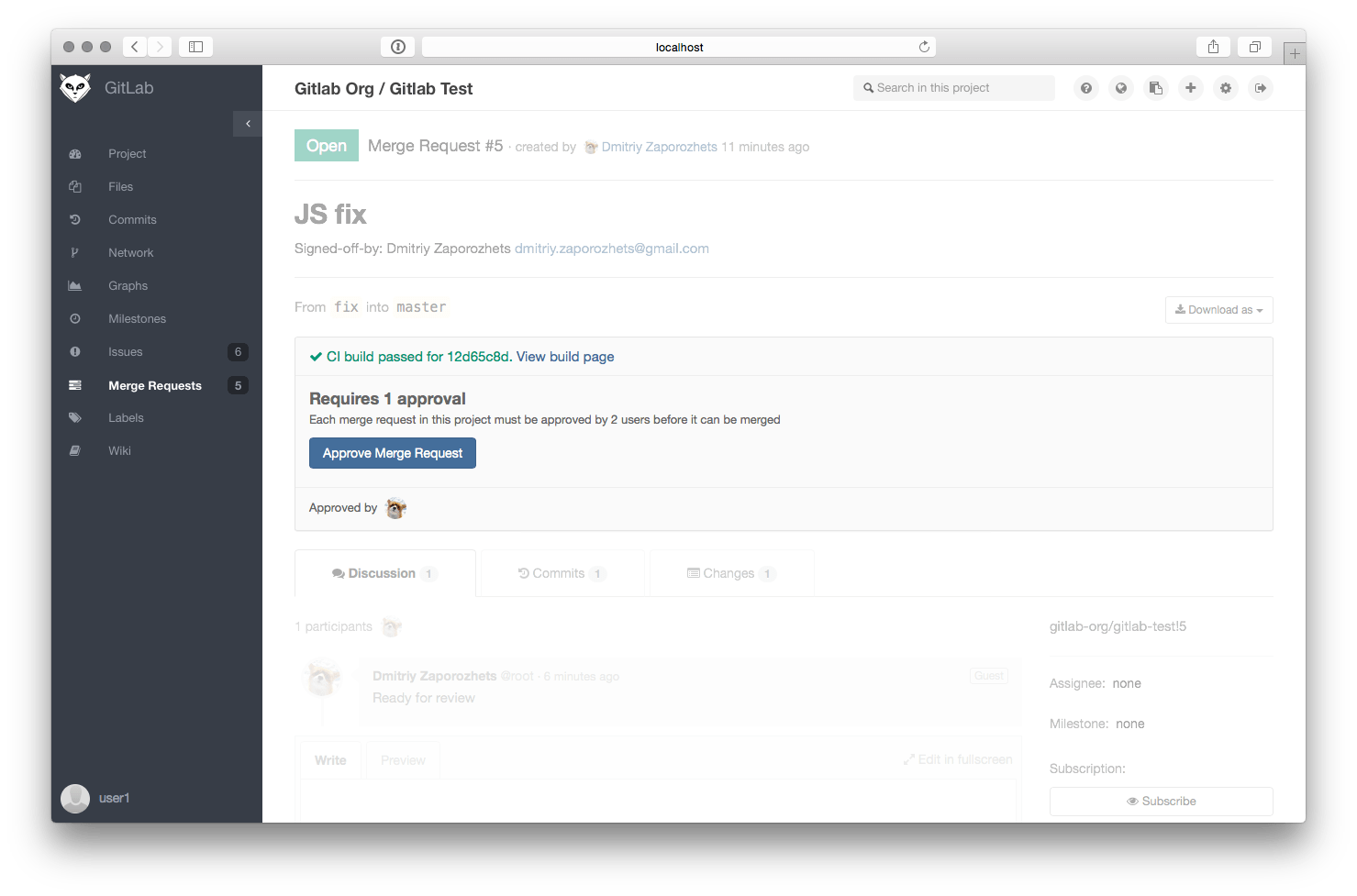 We'd love to hear how you are using this feature in your organization.

We've added a new Git Hook that allows you to restrict the incoming commits with large files. You can simply set the threshold and GitLab will block all future Git pushes containing files that are too big. This can be used to prevent people from committing build artifacts, or to motivate them to use git-annex or some other form of large file storage when that's more appropriate.

We've made several improvements to LDAP Group sync in GitLab EE. It now checks for several more attributes when syncing and prevents the sync from removing the last owner in a group.

As announced on May 6 we're replacing GitLab CI jobs with a .gitlab-ci.yml file stored in the code repository. The advantages are listed in the announcement but the main ones are:

The above things are not possible with Jenkins-like scripts that are the same for the whole project.

GitLab sends the web-hook and the .gitlab-ci.yml contents to the CI Coordinator, which creates builds based on the YAML file. In turn, these builds are executed by the Runners as it was before.

Here is an example of YAML file:

We include a Lint tool to check your syntax. It is available in every GitLab CI instance by the short url /lint. If something goes wrong with your .gitlab-ci.yml after push your code you will be able to see errors in the commit page.

The before_script section will be performed before each job. You can define a deploy job by adding type: deploy. Every job contains parameters such as script (shell script), tags (only runner with this tag/tags can pick this build) and only or except parameter that defines branch names allowed to run build on. The only section takes precedence over the "except". You can read more information about new syntax in the Configuration of your builds with .gitlab-ci.yml

The new format is inspired by the work of Travis CI and CircleCI who are already using YAML files. Initially we considered using the open source modules of Travis CI, but we ended up writing our own so we could offer:

Because of this, the "one image per architecture and that's it" -approach was not an option. As you are able to tag runners and jobs, this gives you a lot of freedom in assigning a job to a certain runner. We hope the new format combines the freedom of Jenkins with the user friendliness of Travis CI.

Upon upgrading to GitLab 7.12, your CI job scripts will be converted automatically into an example .gitlab-ci.yml file, which you can view and download in the project page in GitLab CI.

You should add .gitlab-ci.yml files to all branches in your projects that receive ongoing Git pushes.

We've added a new function to GitLab CI that allows you to set secret variables for runners. Secret variables will be set to the environment by the runner and will be hidden from the build log. Use them for passwords, secret keys or anything else. Make sure you have runner version 0.4 or greater (released today).

This feature is currently in beta. Secrets added to GitLab CI 7.12 will be stored in its SQL database WITHOUT encryption. We will add encryption in 7.13.

This release has more improvements, including security fixes, please check out the Changelog to see the all named changes.

This release only adds minor migrations. If you are on GitLab 7.11 CE or EE you can upgrade to 7.12 while staying online.

Prior to 7.12, any secret_token values you had in gitlab.rb were actually being ignored in favor of whatever is in gitlab-secrets.json. This was an unexpected behaviour as it was expected that specifying a setting in gitlab.rb always takes precedence.

On most GitLab omnibus installations the 'secret_token' values are set only in gitlab-secrets.json, and no action is required.

This change only applies to GitLab omnibus packages. Installations from source are not affected.

When running gitlab-ctl reconfigure omnibus-gitlab needs to decide if the system is using SysV init, Upstart or Systemd so it can install the gitlab-runsvdir service.

Prior to this version, this decision was being done by looking at the platform and version of the OS and what the default init for that system was.

This was unreliable and with omnibus-gitlab being installable on more OS' code that handles this became complicated and error prone.

From this release onwards, this has been replaced and detection is done by querying the OS init system. Based on this response gitlab-runsvdir service is installed.

Following the Logjam vulnerability we changed the recommended SSL cipher suites in omnibus-packages and installations from source. More details can be found in this blogpost.