If there is one thing that recent cyberattacks at companies such as SolarWinds, Codecov, and Kaseya have taught us, it's that software build pipelines are being targeted for attacks more than ever before. Hackers are no longer just attacking the bits and bytes of source code that go into our products, but also the development, testing, and build infrastructure tools that are used to build these products.

Even if you believe your company is at low risk of an attack, it's also important to think about your customers. Businesses with high profile customers – like government agencies or large, multinational corporations that use your products – might have attackers target them by hacking your company, or more specifically, the software you provide them.

The incidents at Solarwinds, Codecov, and Kaseya show that traditional approaches to security are often failing to prevent attacks. Instead of targeting the software that these companies used, attackers targeted software developed by these companies. Hackers may be targeting the source code you write, the open source code your team uses, and the development tools that you rely on. This is why companies like Venafi and GitLab are partnering to make it easier for developers to prevent attacks and make software supply chains more secure.

At Venafi, we believe that a new approach is necessary to secure the software supply chain, especially in the development stage. We also believe it is imperative that engineers incorporate more security controls in the development, build, test, and delivery pipelines.

No single security measure can prevent future attacks. Instead, engineers must adopt multiple software development measures, including a change in mindset about the security of the development infrastructure and who has the ultimate responsibility. Any lasting solution requires collaboration between industry leaders in software development, software security, and application provisioning, but successful collaboration must be led from an engineering-first perspective. 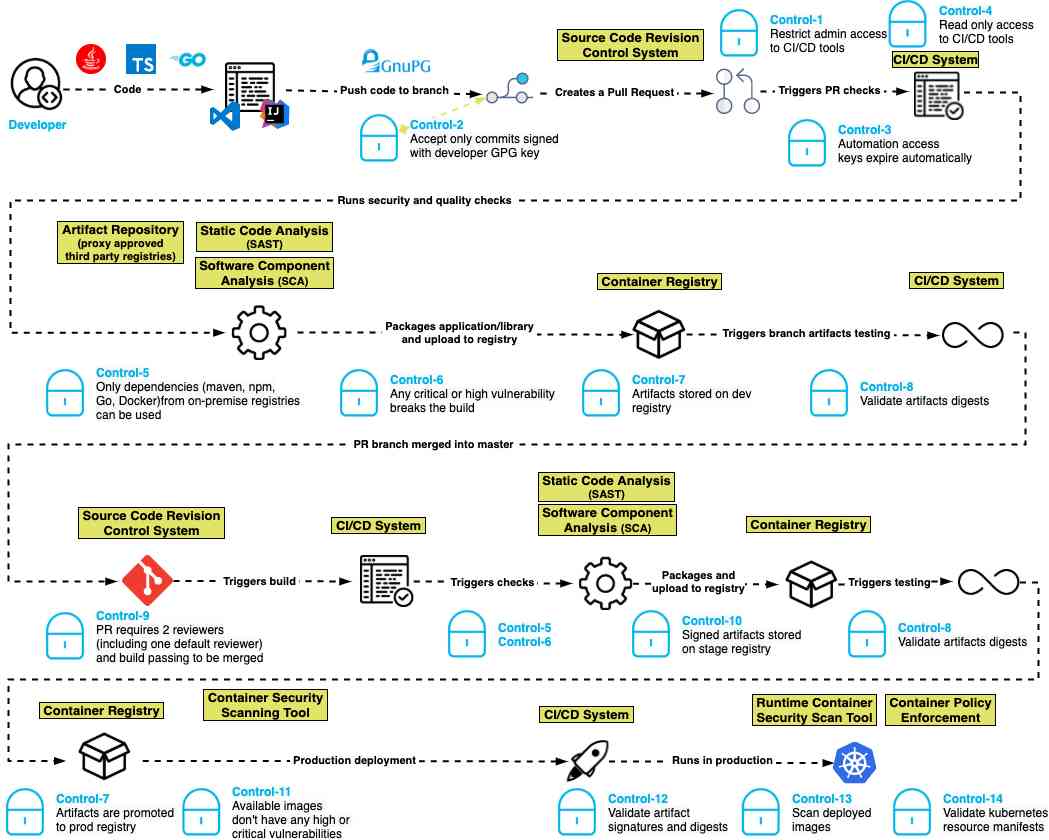 One effective approach software teams can take is to 'sign early, sign often' on all artifacts used by the software build process. A digital signature is an electronic signature that is used to authenticate the identity of the individual or organization that signed a file (for example a program, a document, etc). The digital signature will also make sure that the original content of the file has not been changed. While most people think of digitally signing (code signing) program executables (because operating systems often require it), digital signatures can be applied to any intermediate artifact like source code, build scripts, recipes, deployment containers, and third-party tools used by the development team.

Even if you've checked in a piece of source code to your repository, anyone else could alter that source code later – perhaps even someone pretending to be you. But if the source code was digitally signed, then a malicious actor could not introduce a change without also obtaining the digital code signing key used.

Another scenario to consider is if a development team member downloads the latest version of a third-party app but doesn't run it through your security team's protocols first. If the app contains malware, then your build system was just infected. By ensuring that only authorized versions of tools, libraries, and source code (which have passed security checks) are digitally signed by your company, sources of malware can be minimized.

Now consider automated build infrastructure, such as GitLab. If your pipeline doesn't require digital signatures of all artifacts used to build your products, then anyone could slip in a malicious change that is incorporated automatically, producing a malware-infected executable that could be delivered to your customers.

It's convenient for developers

It's easy enough to say 'sign early & often'. But, why aren't more development teams doing it? It's actually pretty simple to invoke a command line code signing tool such as 'jarsigner' or 'signtool'.

The devil is in the details

Finally, if code signing is to be used as a security measure, your company's security teams need visibility into the process and the ability to define security policies.

Venafi and GitLab partnered together to make it easy for developers to sign source code and other artifacts, all from within your GitLab environment.

Venafi CodeSign Protect is a unique solution that focuses on both the needs of software development teams as well as security teams. Venafi is integrated within the GitLab environment so developers can easily sign their source code and other build artifacts without needing to know anything about PKI, code signing certificates, or code signing keys.

It's time to shift left

'Shift-left' type of attacks are the new generation of cyberattacks. Today, hackers are sophisticated software developers that target build infrastructure. This is why it is essential that engineering teams take action using security measures like code signing.

Venafi and GitLab can help you avoid these costly incidents. Start by reading this brief to learn more about Securing Code Signing in CI/CD Pipelines. Then visit the Venafi Marketplace to download Venafi and Gitlab Plugins, all ready for deployment.

More of a video person? Watch the demo on how to implement code signing using GitLab and Venafi.

“How the partnership between Venafi & @GitLab can make your software more secure.” – Eddie Glenn