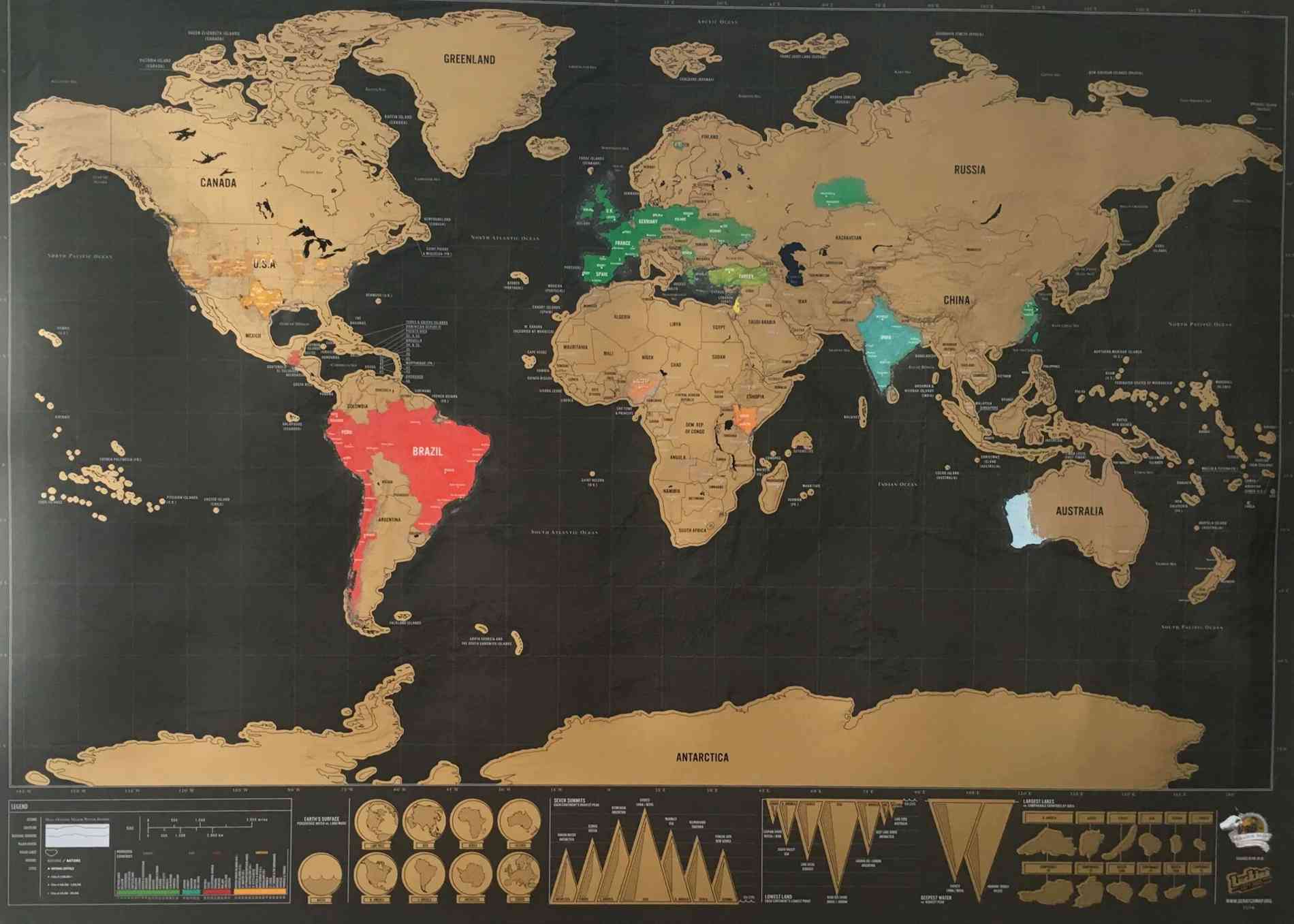 A huge part of the company culture at GitLab is the fact that we are fully remote. We have no hub; Google Hangouts are at our core and we are thriving on this model.

Working remotely affords so many opportunities that being tied to an office never could. For one, you get back the time you used to spend commuting. Some use this extra time to sleep, be with their families, work out, practice their craft, or just relax. We still have a daily team call, but it can just happen with pajama pants on! 😃

Two of my coworkers, whom I think are really excelling at this remote work thing, are Robert and Douwe. They won’t promote their awesomeness so I have to. They have set out to meet other GitLab team-members in 12 different countries for the next 6 months. They are calling it, “Around the World in 6 Releases”. 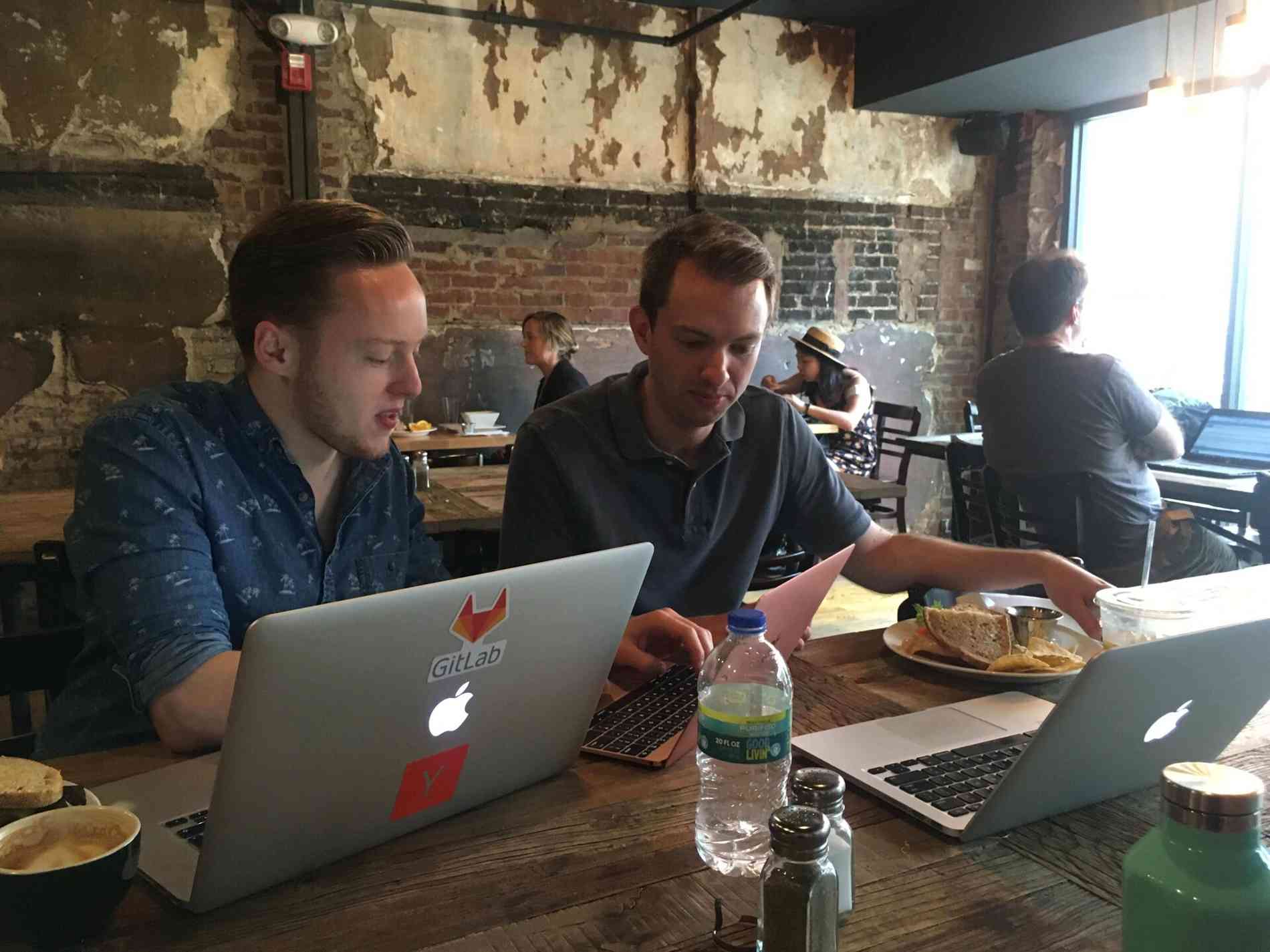 Every week or two they head to a new city, spend the weekdays working, the evenings with the local team members, and the weekends sightseeing. I had the pleasure of meeting up with them on a leg of their North America tour.

Something to note about them - they would rather work than go to the country music hall of fame with me. They would also rather make me eat all the fried bologna sandwiches and moon pies than participate.

Nashville is such a welcoming, lively city. We honkey tonked, Douwe had his first tater tot, and we worked from a bowling alley that also had a swimming pool and served some damn good coffee. John made sure we celebrated National Mac and Cheese Day right with some Hot Hattie B’s Mac topped with their famous hot chicken. When they couldn’t take any more of me leaving Dolly Parton on repeat, they put on Kimmy Schmidt and pretended to go to sleep. 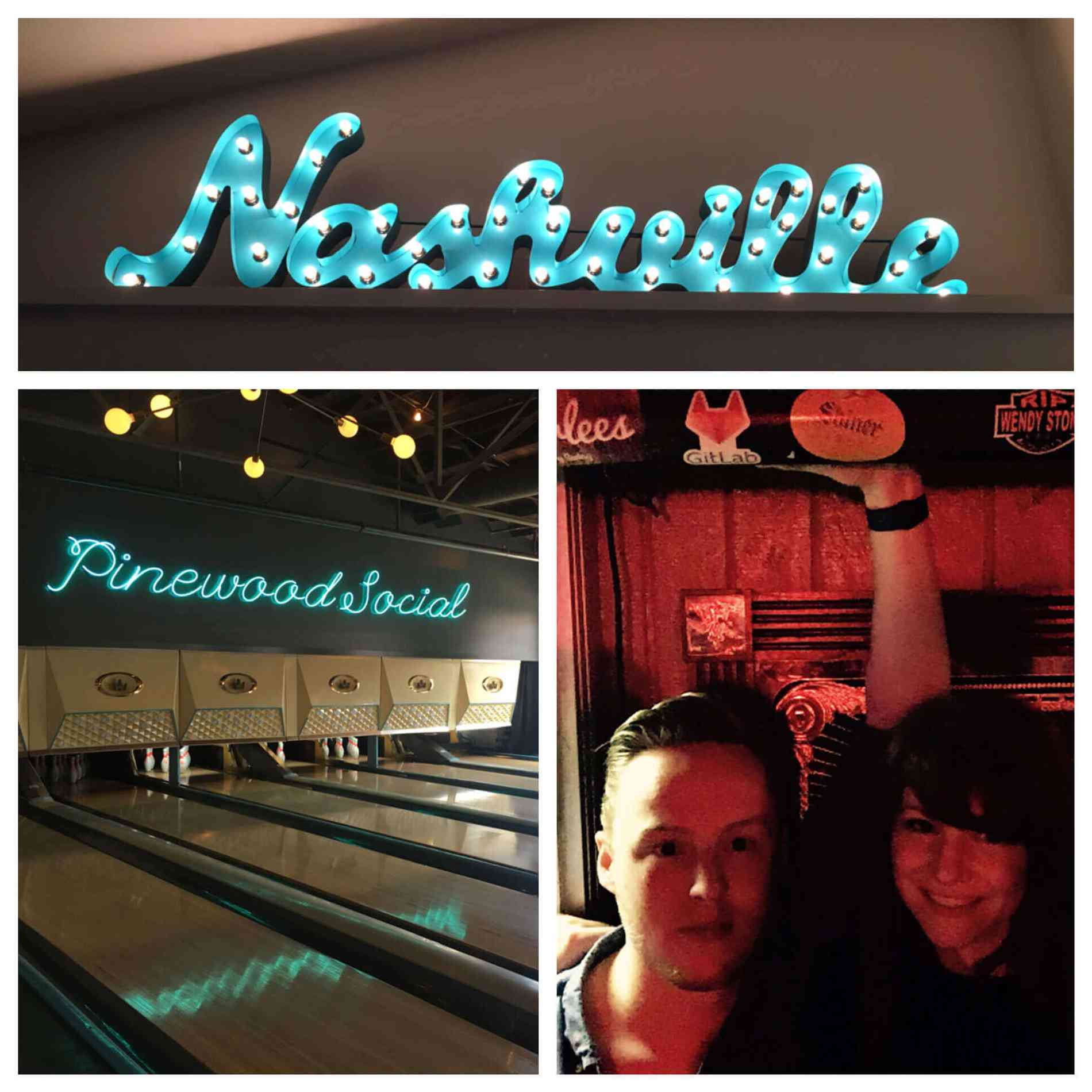 Drew braved a turbulent flight from Nebraska to join us in Denver, where locals Josh and Phil were determined to show us the best the city had to offer. They tried to take us to a Rockies game, which unfortunately was rained out. We made the best of it by going to a local developer meetup. Phil and Josh welcomed us to their local WeWork and once we needed a change of scenery we moved to the bar downstairs, where we were shockingly productive, considering we were working from a brewery. 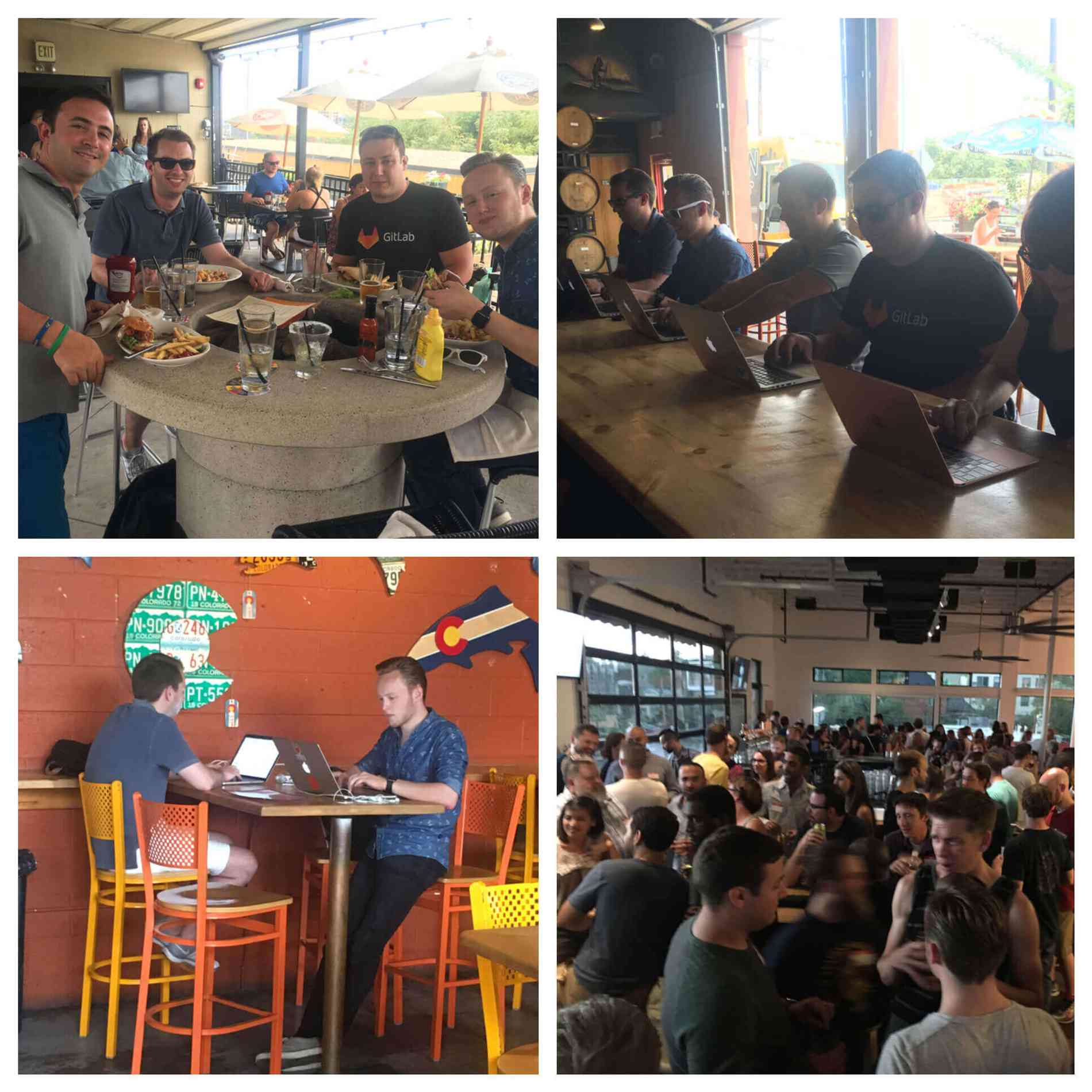 I had to go home to get clean clothes, but they reported Utah was filled with natural beauty. Their highlight was getting to meet and go to dinner with a local GitLab user Gabe Gunderson.

Honored to host these @gitlab ers. Cool guys making a difference in the corporate and open-source worlds. #gitlab pic.twitter.com/nBJ5plVJMa

Kirsten joined us in Vegas with her husband Jobert, co-founder of HackerOne, for the DefCon and Black Hat conferences. I can confidently say the highlight for everyone was the annual Queercon pool party co-sponsored by HackerOne. We were so overcome with excitement at being there we jumped in the pool fully clothed and swam listening to the DJ for hours. John, in an effort to make us all look like slobs, rented a tux for the event. It took a bit of coaxing, but he eventually caved and did the most epic cannonball into the pool in a full out monkey suit. John claims his #tuxedoswim trending on Twitter was worth the extra dry cleaning bill. 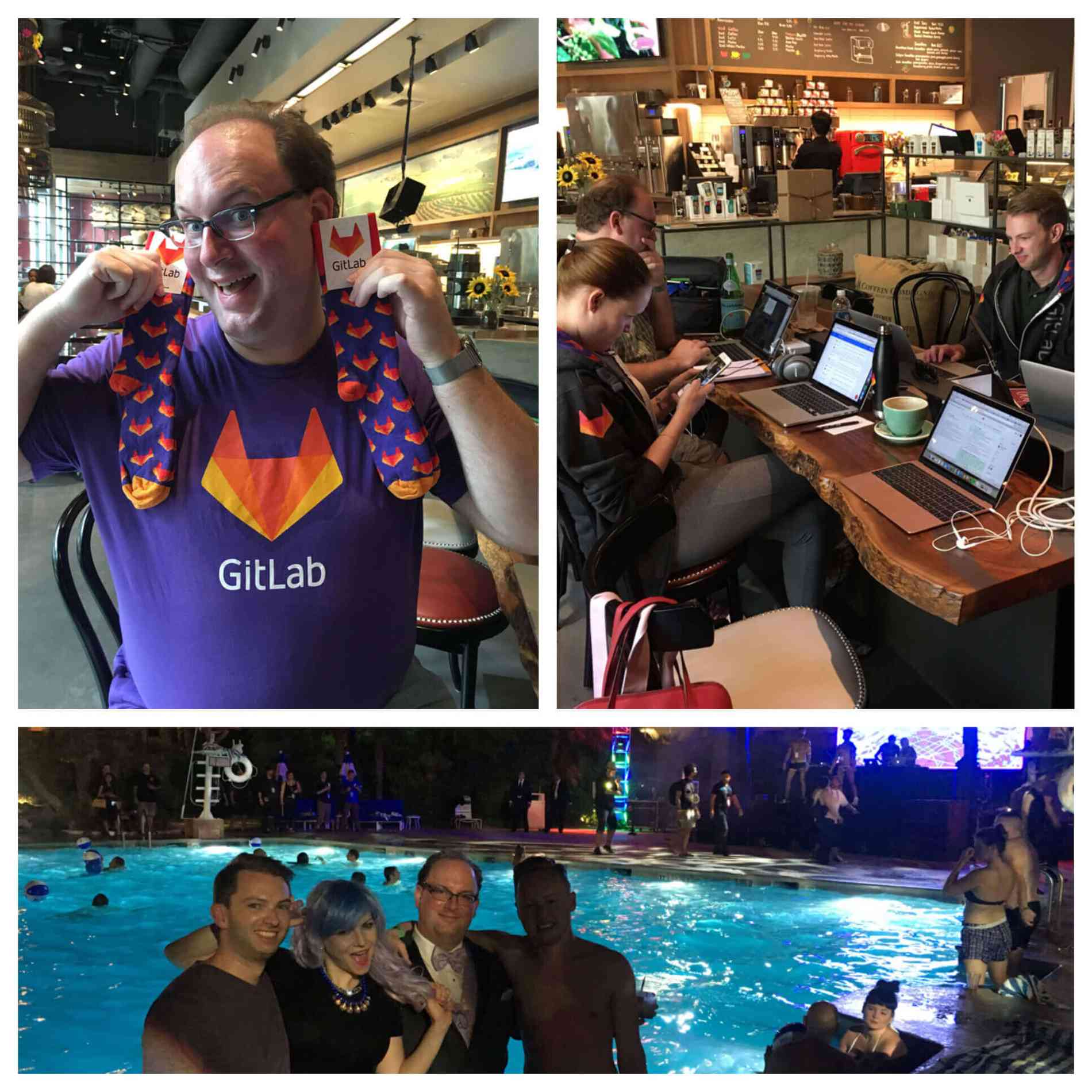 From Vegas they headed to South America where their remote work adventure continues. Look out for their future blog series on the coffee shops with the best wifi in the world and other insights from these road warriors.

This post is one in a series about this particular trip. Check out part 2 and the summary!

If you are as amazed as we are, why don't you consider joining our team? I bet you'd love it!