How Accessibility Testing reinforces our value that everyone can contribute

Why isn't everyone doing accessibility testing?

One of the core tenets of the vision of GitLab is that everyone can contribute. We also firmly believe that GitLab should be accessible to everyone and projects created with GitLab should as well. To better realize this we have introduced Accessibility Testing as a new feature in GitLab 12.8.

In talking to developers, and even my own colleagues, I have been surprised about how many people around me are color blind and have realized how easy this is to overlook. In fact, 8% of the United States male population is color blind, and this is just one kind of visual impairment that may impact a web site's readability. Take for instance the classic North American color indicators for Go / Stop or Good / Bad - Red and Green. An example of the GitLab pipeline page is shown below as users without and with protanopia would see the page. GitLab does make use of differing icons and wording as indicators of a pipeline's status, but the difference is striking. 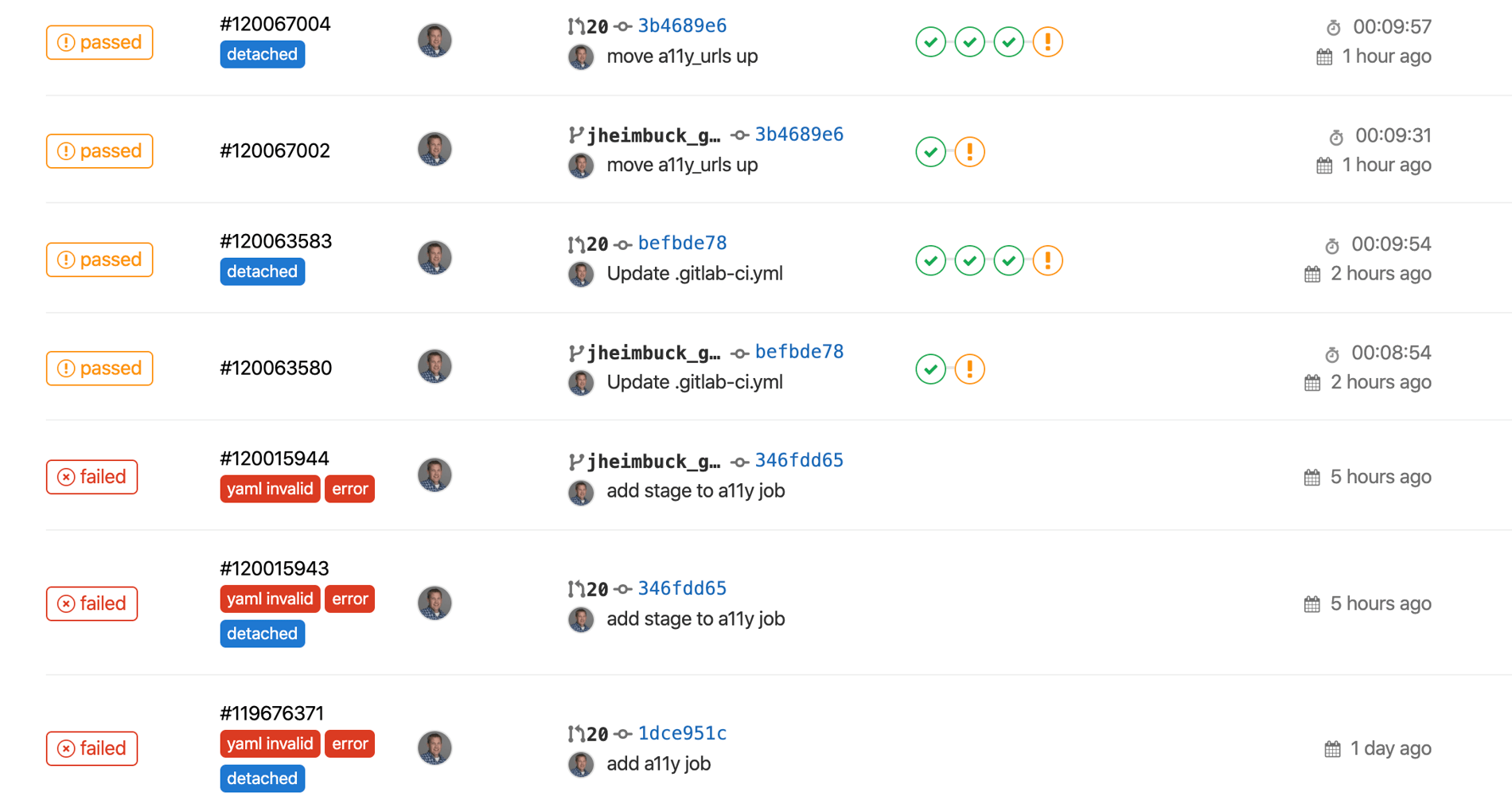 How the Pipelines page appears to users without Protanopia 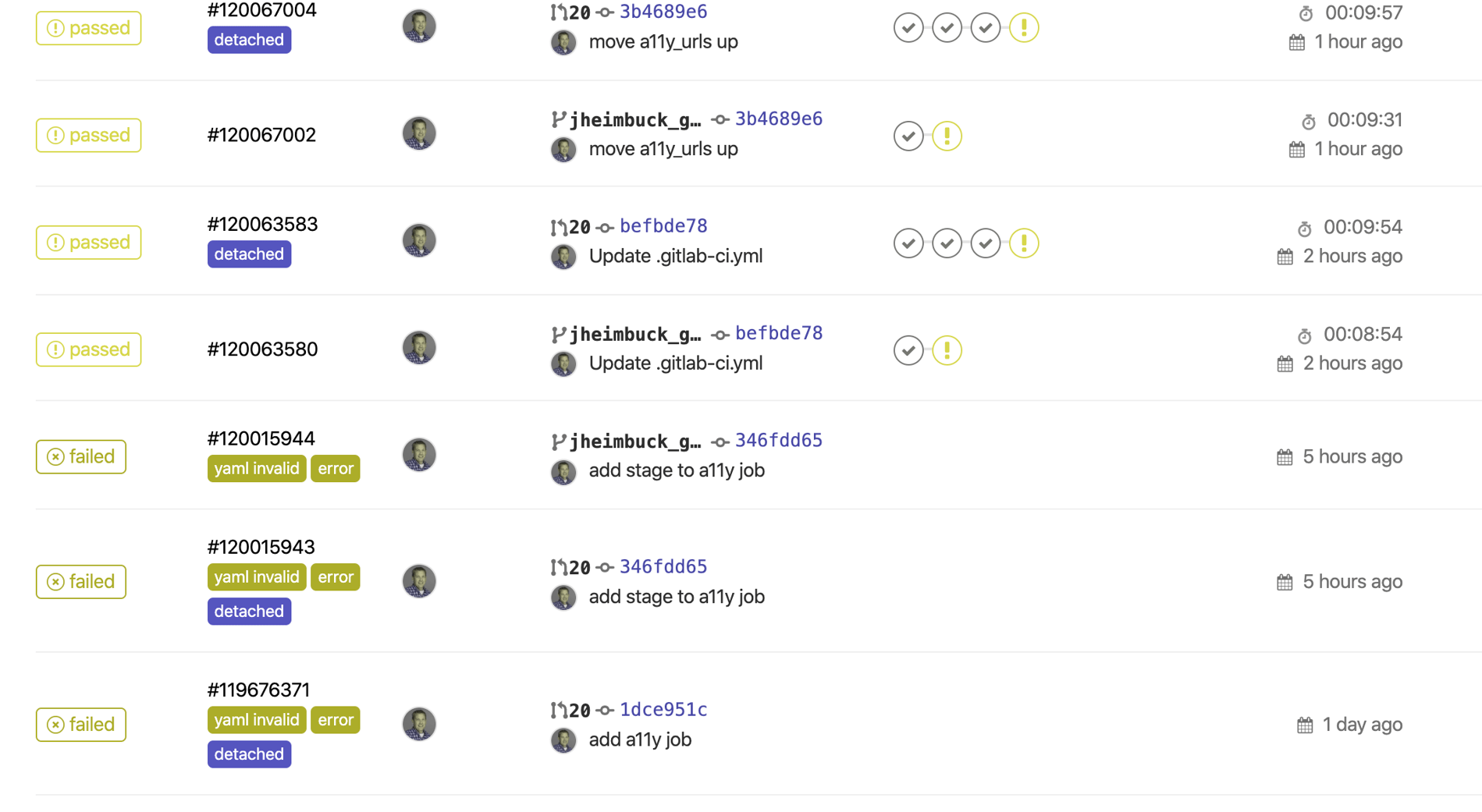 How the Pipelines page appears to users with Protanopia

As we dug into the problem with developers we found two common themes:

Why is accessibility testing a hot topic?

Pizza. More specifically one persons ability to customize a pizza. While some companies may see accessibility testing as a defensive move to prevent law suits we see it a different way at GitLab. We want to build software for everyone and we want to build it quickly. Providing developers a mechanism to improve the accessibility of their software for all users is just the right thing to do.

How is GitLab solving this problem?

With the 12.8 release GitLab has introduced accessibility scanning in the Core product. By including the Accessibility template to your .gitlab-ci.yml file and providing a URL the accessibility scan can be run on every merge request that includes that job.

The example above is from the documentation which includes some additional details.

In the current version of the feature the result is a simple HTML report that outlines the issues with the Review App as identified by the scanner, which uses the W2CAGAA standards. We recognize that this is just a small step in making software more accessible but we are excited about the future.

Future iterations and improvements in GitLab we will be working on for a11y testing include:

This is not a comprehensive list by any means and you can send suggestions for improvements or follow along as the category matures on the Accessibility Testing direction page.

Photo by Matt Noble on Unsplash

Free eBook: The benefits of single application CI/CD Download the ebook to learn how you can utilize CI/CD without the costly integrations or plug-in maintenance. Learn more

GitLab Workflow for VS Code now with more Official

Leverage GitLab from within Visual Studio Code with our official GitLab Workflow Extension!

What is the GitLab CEO shadow program? Why should a GitLab team member apply to participate? How did I see the GitLab values in action?

How to Optimize GitLab’s Culture Through Ideal Values

An outside perspective on GitLab’s highly collaborative and agile culture, and ways in which they should improve their values