The Memory team recently shipped an improvement to our image delivery functions that drastically reduces the amount of data we serve to clients. Learn here how we went from knowing nothing about Golang and image scaling to a working on-the-fly image scaling solution built into Workhorse.

Images are an integral part of GitLab. Whether it is user and project avatars, or images embedded in issues and comments, you will rarely load a GitLab page that does not include images in some way shape or form. What you may not be aware of is that despite most of these images appearing fairly small when presented on the site, until recently we were always serving them in their original size. This meant that if you would visit a merge request, then all user avatars that appeared merely as thumbnails in sidebars or comments would be delivered by the GitLab application in the same size they were uploaded in, leaving it to the browser rendering engine to scale them down as necessary. This meant serving megabytes of image data in a single page load, just so the frontend would throw most of it away!

While this approach was simple and served us well for a while, it had several major drawbacks:

We therefore took on the challenge to both improve rendering performance and reduce traffic costs by implementing an image scaler that would downscale images to a requested size before delivering them to the client.

The first problem is always: understand the problem! What is the status quo exactly? How does it work? What is broken about it? What should we focus on?

We had a pretty good idea of the severity of the problem, since we regularly run performance tests through sitespeed.io that highlight performance problems on our site. It had identified images sizes as one of the most severe issues:

To better inform a possible solution, an essential step was to collect enough data to help identify the areas we should focus on. Here are some of the highlights:

This was proof enough for us that there were significant gains to be made here. Our first intuition was: could this be done by a CDN? Some modern CDNs like Cloudflare already support image resizing in some of their plans. However, we had two major concerns about this:

We therefore decided to look for a solution that would work for all GitLab users, and that would be more under our own control, which led us to phase 2: experimentation!

A frequent challenge for our team (Memory) is that we need to venture into parts of GitLab's code base that we are unfamiliar with, be it with the technology, the product area, or both. This was true in this case as well. While some of us had some exposure to image scaling services, none of us had ever built or integrated one.

Our main goal in phase 2 was therefore to identify what the possible approaches to image scaling were, explore them by researching existing solutions or even building proof-of-concepts (POCs), and grade them based on our findings. The questions we asked ourselves along the way were:

With this in mind, we identifed multiple architectural approaches to consider, each with their own pros and cons. These issues also doubled as a form of architectural decision log so that decisions for or against an approach are recorded.

The major approaches we considered are outlined next.

There are two basic ways in which an image scaler can operate: it can either create thumbnails of an existing image ahead of time, e.g. during the original upload as a background job. Or it can perform that work on demand, every time an image is requested. To make a long story short: while it took a lot of back and forth, and even though we had a working POC, we eventually discarded the idea of scaling statically, at least for avatars. Even though CarrierWave (the Ruby uploader we employ) has an integration with MiniMagick and is able to perform that kind of work, it suffered from several issues:

For these reasons we decided to scale images on-the-fly instead.

When scaling images on-the-fly the question becomes: where? Early on there was a suggestion to use imgproxy, a "fast and secure standalone server for resizing and converting remote images". This sounded tempting, since it is a "batteries included" offering, it's free to use, and it is a great way to isolate the task of image scaling from other production work loads, which has benefits around security and fault isolation.

The main problem with imgproxy was exactly that, however: a standalone server. Introducing a new service to GitLab is a complex task, since we strive to appear as a single application to the end user, and documenting, packaging, configuring, running and monitoring a new service just for rescaling images seemed excessive. It therefore wasn't in line with our prerogative of focusing on the minimum viable change. Moreover, imgproxy had significant overlap with existing architectural components at GitLab, since we already run a reverse proxy: Workhorse.

We therefore decided that the fastest way to deliver an MVC was to build out this functionality in Workhorse itself. Fortunately we found that we already had an established pattern for dealing with special, performance sensitive workloads, which meant that we could learn from existing solutions for similar problems (such as image delivery from remote storage), and we could lean on its existing integration with the Rails application for request authentication and running business logic such as validating user inputs, which helped us tremendously to focus on the actual problem: scaling images.

There was a final decision to make, however: scaling images is a very different kind of workload from serving ordinary requests, so an open question was how to integrate a scaler into Workhorse in a way that would not have knock-on effects on other tasks Workhorse processes need to execute. The two competing approaches discussed were to either shell out to an executable that performs the scaling, or run a sidecar process that would take over image scaling work loads from the main Workhorse process.

The main benefit of a sidecar process is that it has its own life-cycle and memory space, so it can be tuned separately from the main serving process, which improves fault isolation. Moreover, you only pay the cost for starting the process once. However, it also comes with additional overhead: if the sidecar dies, something has to restart it, so we would have to look at process supervisors such as runit to do this for us, which again comes with a significant amount of configuration overhead. Since at this point we weren't even sure how costly it would be to serve image scaling requests, we let our MVC principle guide us and decided to first explore the simpler fork-on-request approach, which meant shelling out to a dedicated scaler binary on each image scaling request, and only consider a sidecar as a possible future iteration.

Forking on request was explored as a POC first, and was quickly made production ready and deployed behind a feature toggle. We initially ended up settling on GraphicsMagick and its gm binary to perform the actual image scaling for us, both because it is a battle tested library, but also because there was precedent at GitLab to use it for existing features, which allowed us to ship a solution even faster.

The "secret sauce" here is the Gitlab-Workhorse-Send-Data header synthesized by Rails. It carries all necessary parameters for Workhorse to act on the image, so that we can maintain a clean separation between application logic (Rails) and serving logic (Workhorse). We were fairly happy with this solution in terms of simplicity and ease of maintenance, but we still had to verify whether it met our expectations for performance and security.

Phase 3: Measuring and securing the solution

During the entire development cycle, we frequently measured the performance of the various appraoches we tested, so as to understand how they would affect request latency and memory use. For latency tests we relied on Apache Bench, since recalling our initial mission, we were mostly interested in reducing the request latency a user might experience.

We also ran benchmarks encoded as Golang tests that specifically compared different scaler implementations and how performance changed with different image formats and image sizes. We learned a lot from these tests, especially where we would typically lose the most time, which often was in encoding/decoding an image, and not in resizing an image per se.

We also took security very seriously from the start. Some image formats such as SVGs are notorious for remote code execution attacks, but there were other concerns such as DOS-ing the service with too many scaler requests or PNG compression bombs. We therefore put very strict requirements in place around what sizes (both dimensionally but also in bytes) and formats we will accept.

Unfortunately one fairly severe issue remained that turned out to be a deal breaker with our simple solution: gm is a complex piece of software, and shelling out to a 3rd party binary written in C still leaves the door open for a number of security issues. The decision was to sandbox the binary instead, but this turned out to be a lot more difficult than anticipated. We evaluated but discarded multiple approaches to sandboxing such as via setuid, chroot and nsjail, as well as building a custom binary on top of seccomp. However, due to performance, complexity or other concerns we discarded all of them in the end. We eventually decided to sarifice some performance for the sake of protecting our users as best we can and wrote a scaler binary in Golang, based on an existing imaging library, which had none of these issues.

In roughly two months we took an innocent sounding but in fact complex topic, image scaling, and went from "we know nothing about this" to a fully functional solution that is now running on gitlab.com. We faced many headwinds along the way, in part because we were unfamiliar with both the topic and the technology behind Workhorse (Golang), but also because we underestimated the challenges of delivering an image scaler that will be both fast and secure, an often difficult trade-off. A major lesson learned for us is that security cannot be an afterthought; it has to be part of the design from day one and must be part of informing the approach taken.

So was it a success? Yes! While the feature didn't have as much of an impact on overall perceived client latency as we had hoped, we still dramatically improved a number of metrics. First and foremost, the dreaded "properly size image" reminder that topped our sitepeed metrics reports is resolved. This is also evident in the average image size processed by clients, which for image heavy pages fell off a cliff (that's good – lower is better here): 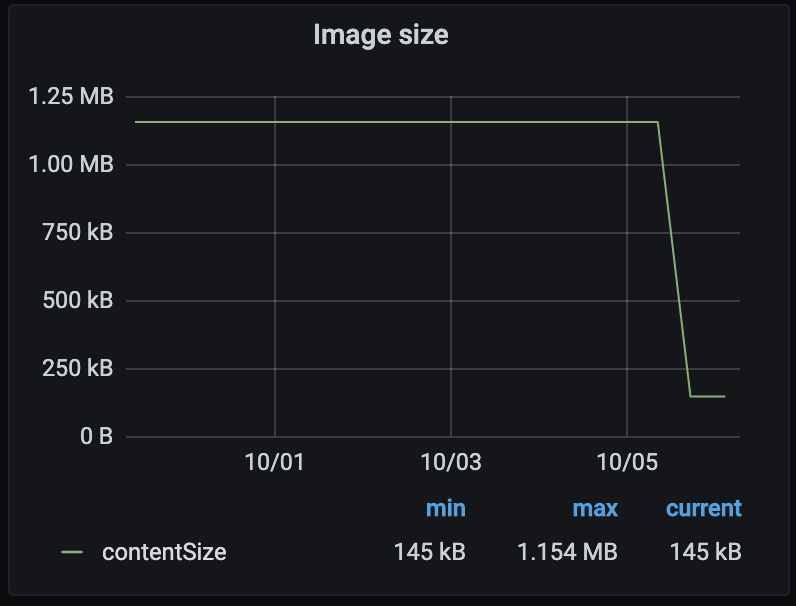 Site-wide we saw a staggering 93% reduction in image transfer size of page content delivered to clients. These gains also translate into savings for GCS egress traffic, and hence Dollar cost savings, by an equivalent amount.

A feature is never done of course, and there are a number of things we are looking to improve in the future:

The Memory team meanwhile will slowly step back from this work, however, and hand it over to product teams as product requirements evolve.

“Scaling down: How we shrank image transfers by 93 percent” – Matthias Käppler