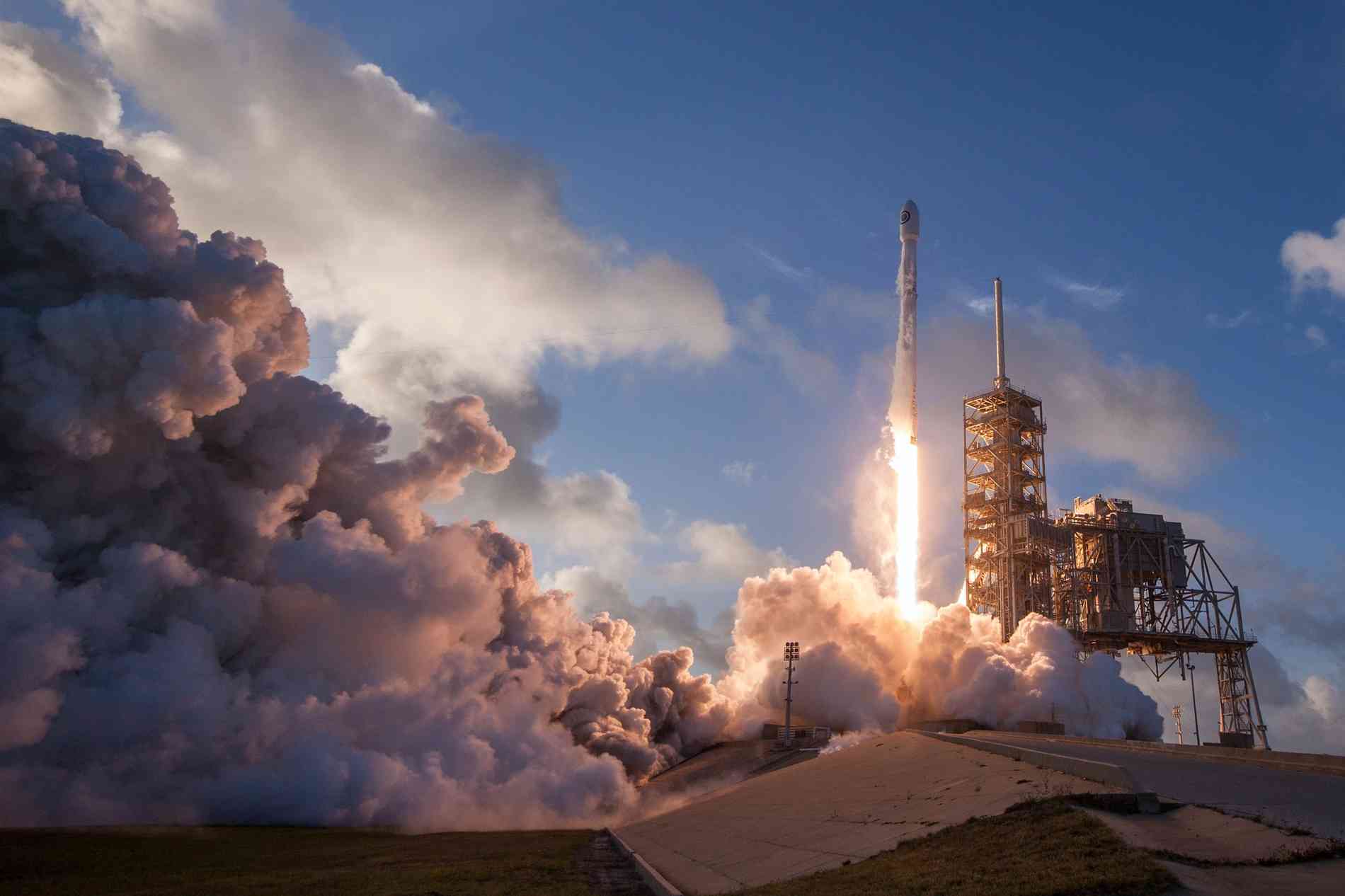 Cloud computing services are replacing traditional hardware technologies at an extremely fast pace. The majority of businesses worldwide are already moving to the cloud or plan to in the near future. Over a short period of time, this technology took over the market as businesses preferred remote access to data as well as the cloud's scalability, economy, and reach.

AWS Deployment: deploying to the cloud

COVID-19 and the resulting trend toward remote work forced organizations to adopt cloud technologies even if they hadn’t planned to originally. Software deployment to the cloud has also increased. Cloud is no longer just virtual machines, organizations are driving the use of Containers as a Service (CaaS) due to their growing interest in leveraging containers to ease development and testing, speed up deployment, scale operations, and increase the efficiency of workloads running in the cloud.

Since deployment to the cloud has become a standard practice, at GitLab we want to make this repeatable and boring. In this blog post, we explain how we've made deploying to Amazon Web Services (AWS) easier and we invite users to replicate this example to deploy to other cloud providers in a similar way.

Since we want cloud deployment to be as flexible as possible (similar to a microservices architecture), we constructed atomic Docker images that function as building blocks. Users can use these images as part of their custom gitlab-ci.yml file or use our predefined .gitlab-ci.yml templates. We also added the ability to use Auto DevOps with the new AWS deployment targets.

AWS Deployment: how to use GitLab's official AWS Docker Images

In GitLab 12.6, we provided an official GitLab AWS cloud-deploy Docker image that downloads and installs the AWS CLI. This allows users to run aws commands directly from their pipelines. For more information, see Run AWS commands from GitLab CI/CD.

In GitLab 13.5, we provided a Docker image that runs a script that creates a stack with Cloud Formation. The gl-cloudprovision create-stack uses aws cloudformation create-stack behind the scenes. A JSON file based on the CloudFormation template must be passed to that command. For an example of this type of JSON file, see cf_create_stack.json. With this type of JSON file, the command creates the infrastructure on AWS, including an EC2 instance directly from the .gitlab-ci.yml file. The script exists once we get confirmation that the stack setup is complete or has failed (through periodic polling).

Push to S3 and Deploy to EC2 Docker image

In GitLab 13.5 we also provided a Docker image with Push to S3 and Deploy to EC2 scripts. The gl-ec2 push-to-s3 script pushes code to an S3 bucket. For an example of the JSON file to pass to the aws deploy push command, see s3_push.json. This code can be whatever artifact is built from a preceding build job. The gl-ec2 deploy-to-ec2 script uses aws deploy create-deployment behind the scenes to create a deployment to an EC2 instance directly from the .gitlab-ci.yml file. For an example of the JSON template to pass, see create_deployment.json. The script ends once we get confirmation that the deployment has succeeded or failed (via polling).

How to deploy to Elastic Container Service (ECS) with GitLab

In GitLab 12.9, we created a full .gitlab-ci.yml template called Deploy-ECS.giltab-ci.yml that deploys to ECS and extends support for Fargate. Users can include the template in their configuration, specify a few variables, and their application will be deployed and ready to go in no time. This template can be customized for your specific needs. For example: Replacing the selected container registry, changing the path of the file location, etc.

How to deploy to Elastic Cloud Compute (EC2) with GitLab

In GitLab 13.5, we created a full .gitlab-ci.yml template called CF-Provision-and-Deploy-EC2.gitlab-ci.yml that provisions the infrastructure by leveraging AWS CloudFormation. It then pushes your previously-built artifact to an AWS S3 bucket and deploys the pushed content to AWS EC2.

In order to deploy to AWS, you must use AWS security keys to connect to to your AWS instance. Users can define this security keys as CI/CD environment variables that can be used by the deployment pipeline.

In GitLab 12.9, we added support for predefined AWS variables. This support function helps users know which variables are required for deploying to AWS and also prevents typos and spelling mistakes.

GitLab 13.1 provides just-in-time guidance for users who wish to deploy to AWS. Setting up AWS deployments isn't always as easy as we'd like it to be, so we've added in-product links to our AWS templates and documentation when you start adding AWS CI/CD variables to make it easier for you to use our AWS features. This will help you get up and running faster. 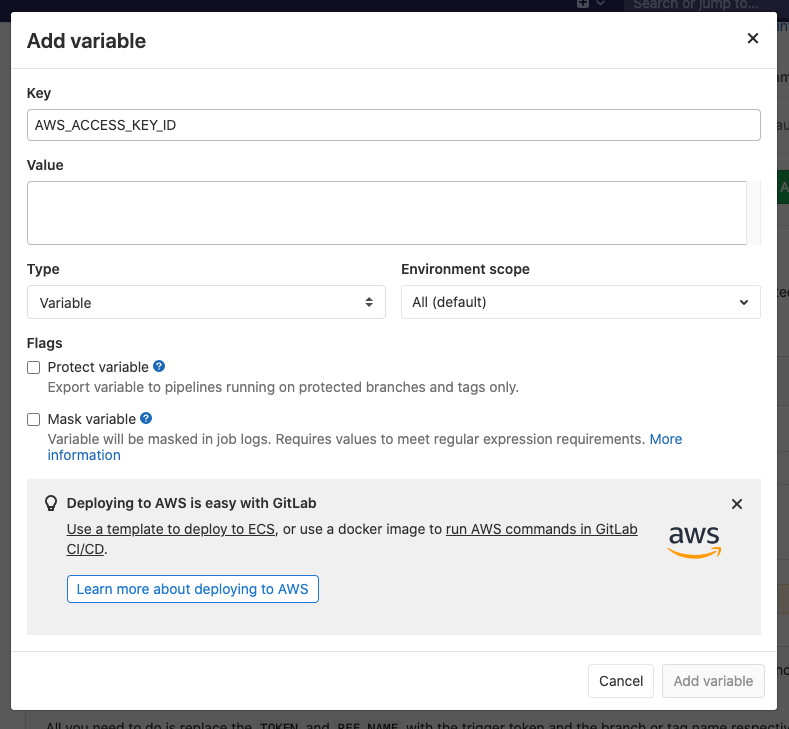 In GitLab 13.5, we changed the image identifier from the release version number to the Docker image digest. Docker supports immutable image identifiers and we adopted this best practice to update our cloud-deploy images. When a new image is tagged, we also programmatically retrieve the image digest upon its build and create a release note to effectively communicate this digest to users. This guarantees that every instance of the service runs exactly the same code. You can roll back to an earlier version of the image, even if that version wasn't tagged (or is no longer tagged). This can even prevent race conditions if a new image is pushed while a deploy is in progress.

GitLab already supports Kubernetes users deploying to AWS EKS cluster. Click the link to read instructions about how to deploy an application to a GitLab-managed Amazon EKS cluster with Auto DevOps.

We also expanded Auto DevOps to support non-Kubernetes users. Users can specify their deployment target by adding the AUTO_DEVOPS_PLATFORM_TARGET variable under the CI/CD variables settings. Specifying the deployment target platform builds a full CI/CD pipeline that deploys to AWS targets.

Here's a quick recording for how to use Auto Deploy to ECS:

Speed run on how to use auto deploy to EC2 (animation):

Check out some of the open issues below to see our plans are for the future of deploying to AWS using GitLab.

More material on deploying to EKS and Lambda

We invite you to contribute to our other cloud provider solutions:

At GitLab, everyone can contribute. If you want to deploy to a target that isn't mentioned in this post, please let us know by adding an issue and linking it to our Natively support hypercloud deployments epic.

Cover image by SpaceX on Unsplash

“Deploying to AWS is now easier on @GitLab. Read on to learn how to deploy to other cloud providers in a similar way” – Orit Golowinski