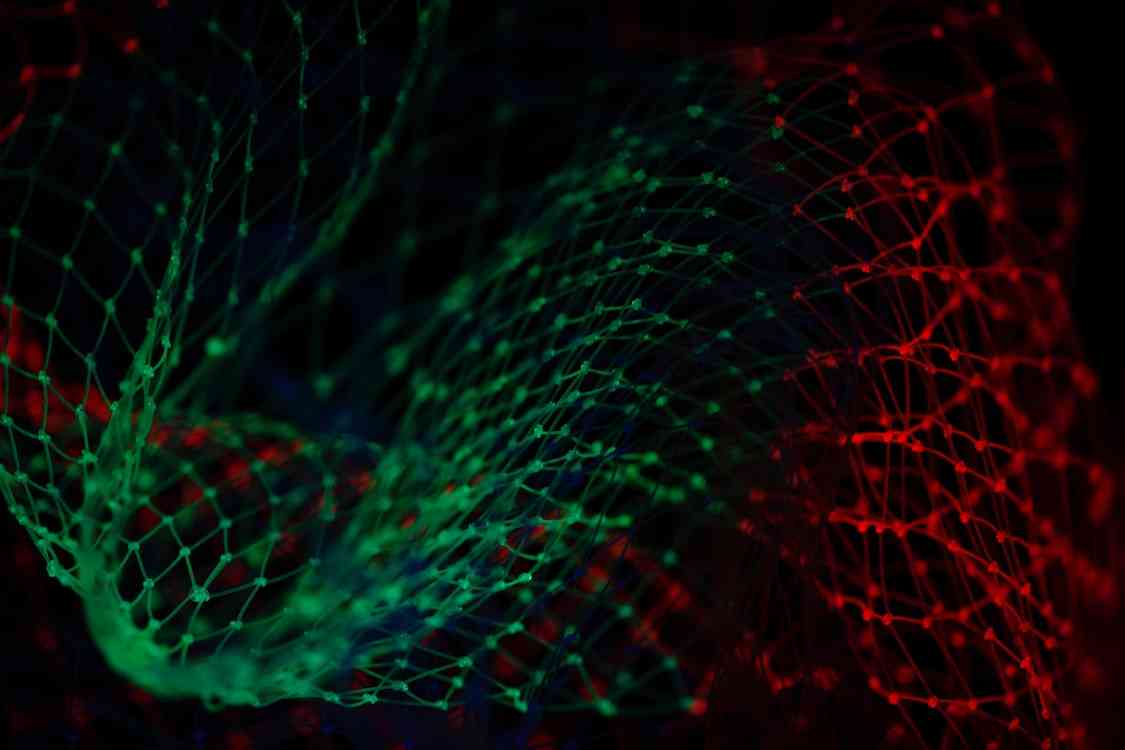 In this second GitLab security trends report, we analyzed security vulnerability trends across thousands of projects hosted on GitLab.com. Doing the analysis allowed us to identify trends and patterns that security practitioners can use to benchmark against their organizations.

For this section of the analysis, all detected vulnerabilities across all scanners were mapped against their primary CWE: Common Weakness Enumeration. The pertinent CVEs (Common Vulnerabilities and Exposures) are included with each vulnerable library or component.

The top three CWEs in August were:

Improper input validation allows for potential injection attacks (SQL, code, etc). The top findings were from the container scanner which found issues with out of date software, most notably for:

The dependency scanner also found issues for libraries in use including:

CWE-787: Out of bounds write of intended buffer

This allows for potential remote code execution. The top findings were from the container scanner which found the below software to be out of date and vulnerable:

The dependency scanner also found issues for dependant libraries in use, with the top one being execa.

Uncontrolled resource consumption allows for potential denial of service attacks against specific software. The top findings were from the dependency scanner for the Mixin-deep library. 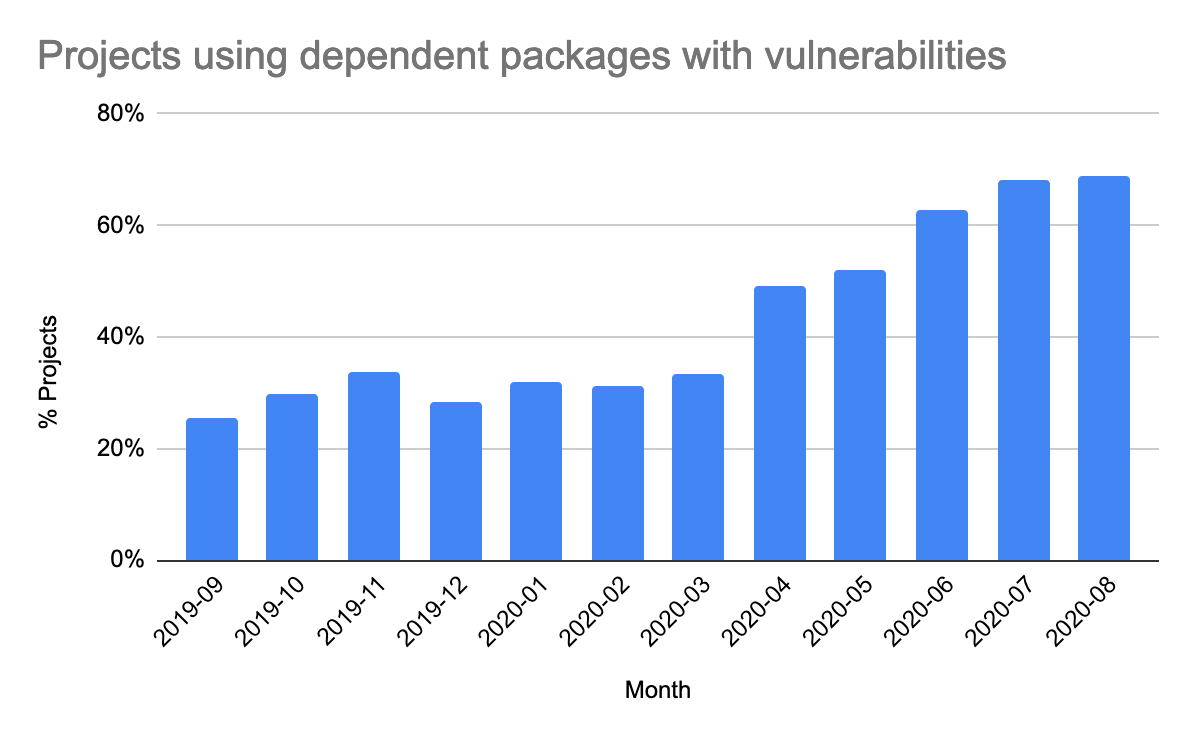 The percentage of projects finding issues with dependent libraries in use has significantly increased over the last year, from 26% to 69%. This reinforces that updating dependent libraries should be prioritized based on the risks those libraries pose. GitLab dependency scanning can be used to scan project dependencies for vulnerabilities.

As new vulnerabilities are discovered in libraries, and projects using them have their dependencies scanned, the libraries rise in prevalence. As the dependencies are updated later, they drop in prevalence. However, not all teams reliably prioritize and resolve issues, so many vulnerable dependent libraries continue to be in use for a long period of time.

The top libraries in use with vulnerabilities in August were: 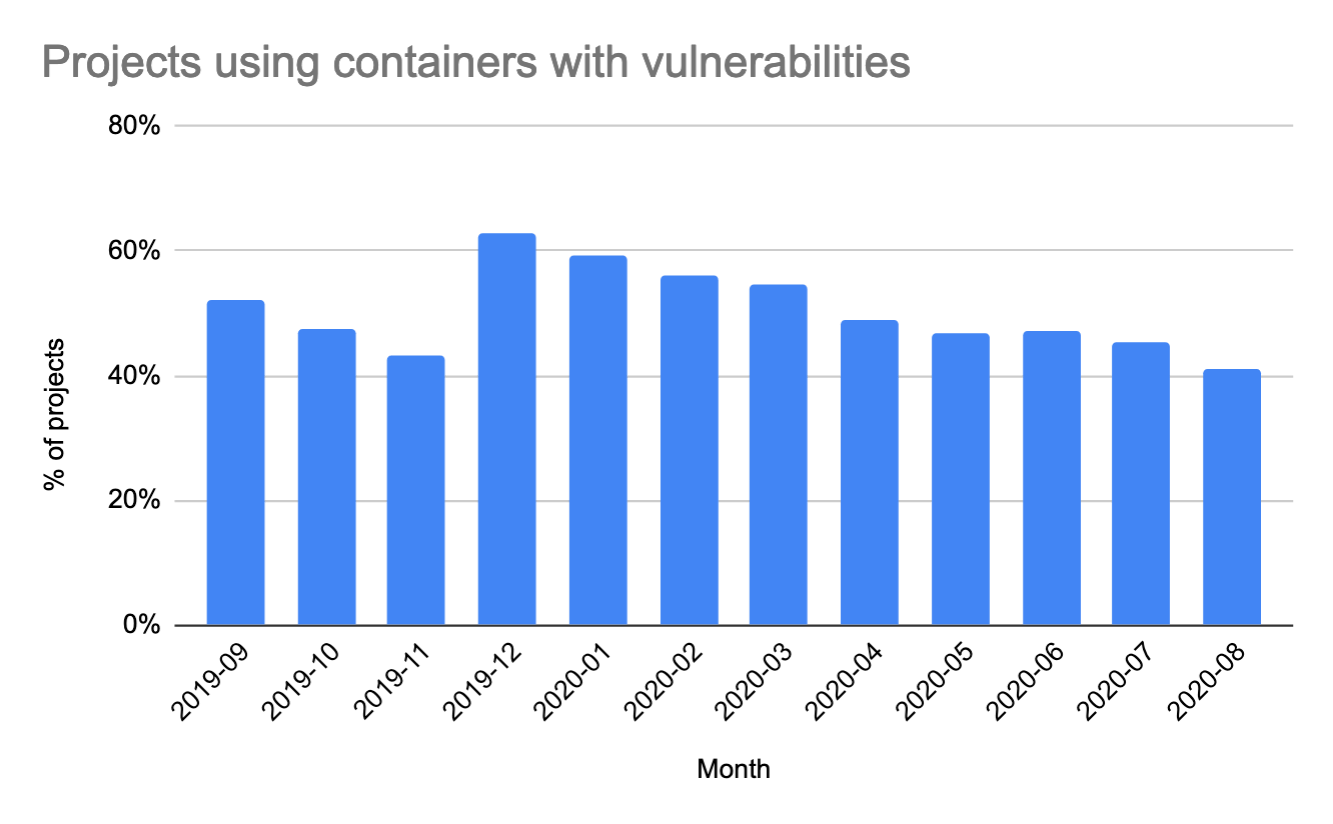 The percentage of projects finding issues with containers has decreased over the last year, from 52% to 41%. While we have seen a small decrease, it is still relatively high. Keeping container registries up-to-date and rebuilding/redeploying the containers that use them continues to be essential to reduce security risk. GitLab container scanning can be used to scan Docker images for known vulnerabilities. 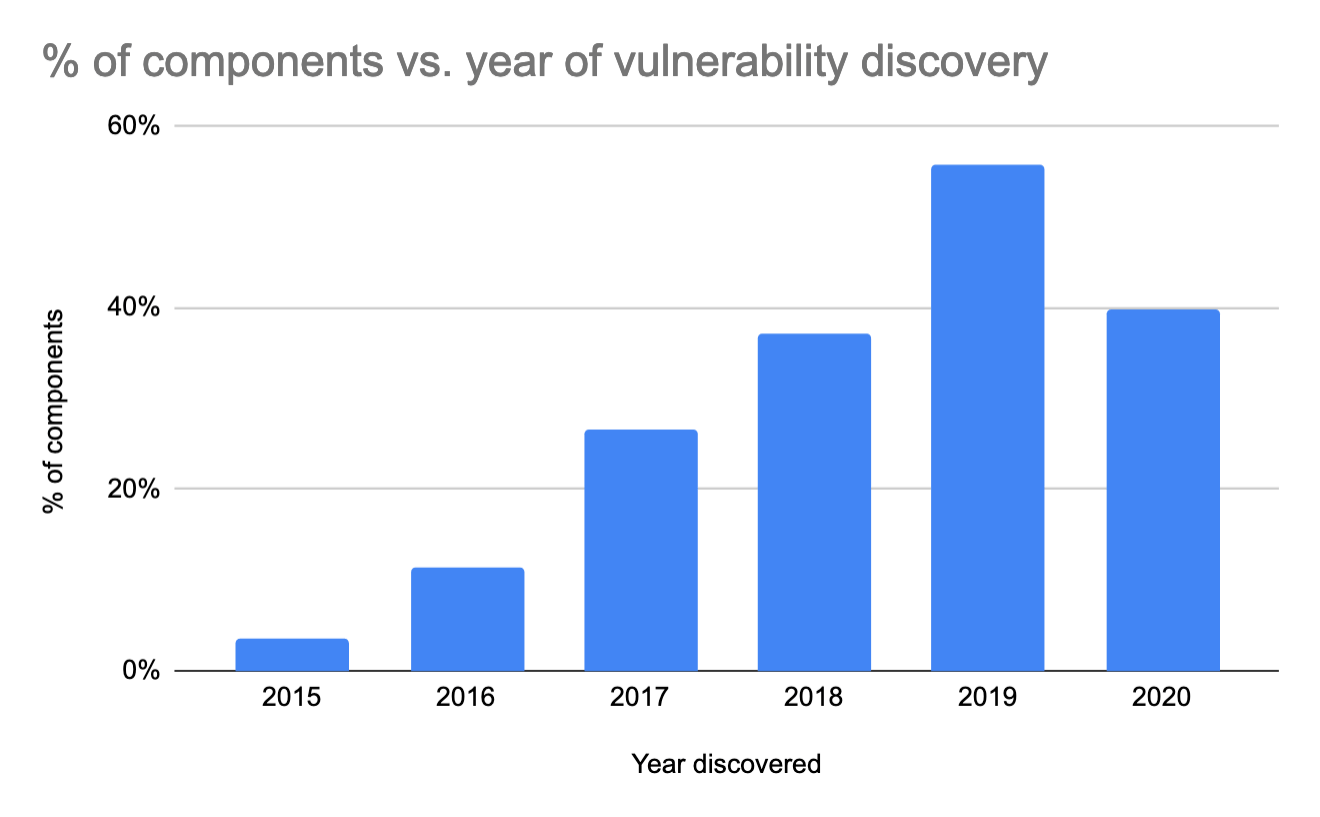 While many projects update containers, a significant number of projects use containers with vulnerabilities that were discovered many years prior. Being diligent in identifying and updating all containers in use is essential to maintain the appropriate level of security vigilance. 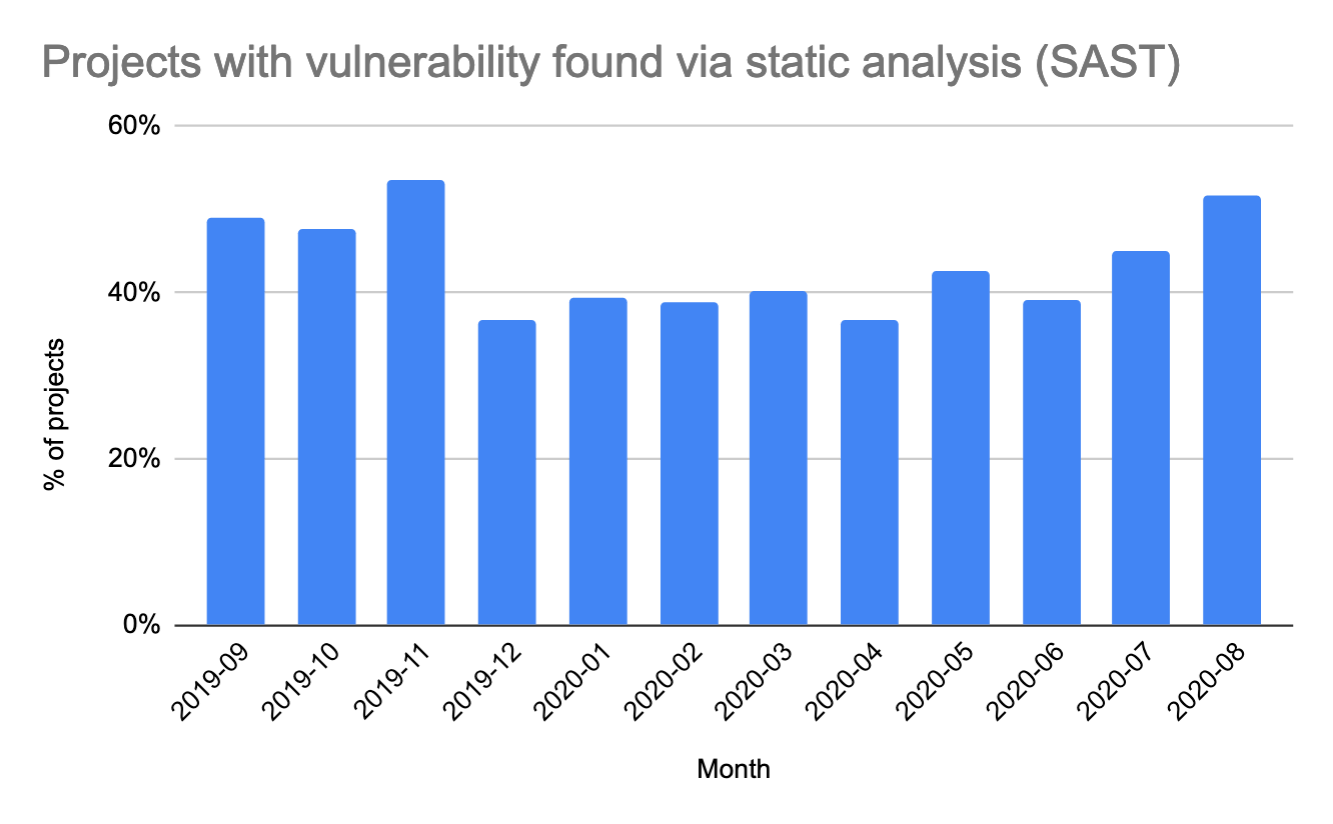 The percentage of projects finding vulnerabilities via static scanning over the last year has remained mostly unchanged (from 49% to 52%). This shows that static scanning continues to be quite effective in identifying security vulnerabilities. GitLab can be used for static application security testing (SAST) and secret detection.

Many SAST checks can have a false positive rate, especially when scanning code for automated tests (which, for example, may contain non-production secrets). It is crucial to tune the SAST scanners to reduce false positives, allowing the developers to focus on other issues that have a higher likelihood of being a real problem.

The top vulnerabilities in this category were:

The top types of secrets/keys identified were:

For security reasons, secrets (such as keys, passwords, etc) should never be stored in the codebase. However, it is very convenient for developers to do this making it a common security anti-pattern. Secrets should be stored in a storage mechanism designed for security, such as vault. 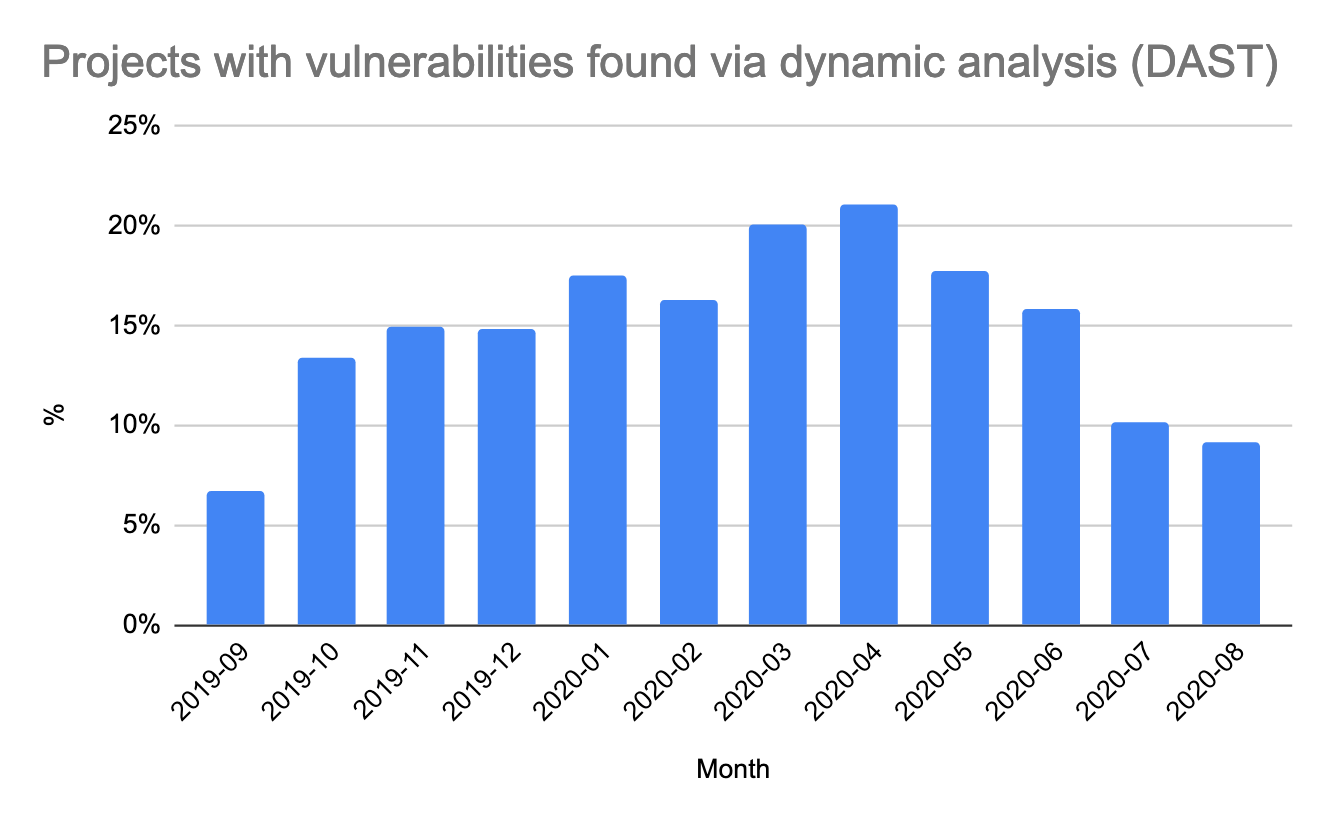 The percentage of projects finding vulnerabilities via dynamic scanning over the last year went from 7% to a high of 20% and then back down to 9%. After initial scanning and issue resolution, dynamic scanning tends to primarily only find low priority vulnerabilities unless the scanners are configured to authenticate the web applications and successfully spider the entire application. Security practitioners must periodically confirm the results as the configuration tends to stop working over time.

GitLab can be configured to do dynamic application security testing (DAST).

The top vulnerabilities in this category were:

Fuzzing is a new feature recently released by GitLab. Fuzz testing can be configured in the GitLab UI.

The top vulnerabilities detected in this new feature include:

The trends report's underlying data is sourced from projects hosted on GitLab.com and does not include data from our self-managed customers. It is comprised of medium or higher severity vulnerabilities appearing in five or more projects that occurred between September 2019 and October 2020. All project-specific data was anonymized.

Thanks to David DeSanto, Todd Stadelhofer, Nicole Schwartz, Nico Meisenzahl, and Sean Wright for the feedback on the blog content.

“For the second time this year @gitlab has analyzed security vulnerability trends across thousands of projects on GitLab.com. Here's what you should be paying attention to.” – Wayne Haber