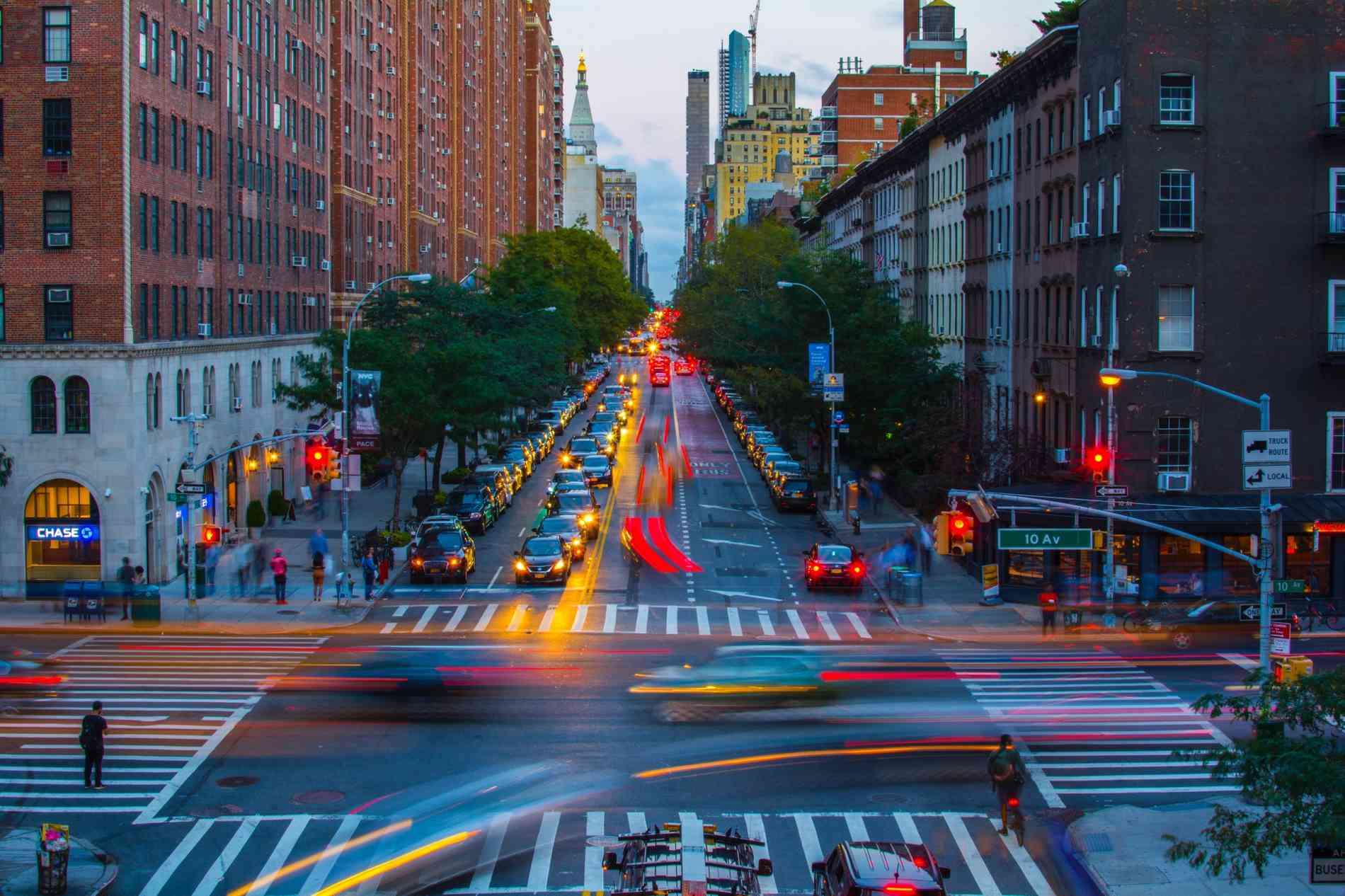 If you’re interested in learning more about what threat modeling is and how we’re developing our threat model here at GitLab, you can read about “How we’re creating a threat model framework that works for GitLab“ by my teammate Mark Loveless.

In this blog post I’ll talk about how we put our threat modeling process into action iteratively with an in-depth look into how we developed the process from a security assessment with a side of threat modeling to a full-fledged standalone activity.

This first review, despite our threat model being early stage, still allowed us to identify issues and findings (like the Agent exposing public projects with private repositories (fixed with this merge request) or the Agent name being vulnerable to path traversal attacks (fixed with this merge request)) that benefited our security and the broader engineering teams. Plus, the cross-organizational feedback we received during this iteration was key to improving our threat model integration and templates.

Four months had passed since the initial assessment; it was time to revisit our previous findings and to review the expanded capabilities of the Kubernetes Agent feature. The architecture had also evolved, and at a high level we can see the product is changing names (kgb changed to kas, for Kubernetes Agent Server (KAS)).

By this time the threat modeling template we were using had evolved, and our Application Security team had used it in several other reviews.

GitLab’s practice of dogfooding means we use issues to track our reviews. At the time of this second review, our threat modeling template now had a more structured approach where reviewers had sections that would 1) guide them throughout the review 2) require them to provide specific information.

Because our process was more robust now we moved the threat modeling activity of our security assessments into a dedicated repository, giving us a single source of truth. The template had evolved to also include:

What is better than iteration? More iteration

Since our second review in October 2020, the Kubernetes Agent feature had evolved significantly, so we performed another assessment in February 2021. The difference this time was that we now had a formal threat modeling process in place.

To better understand the Kubernetes Agent feature, we added more details to our architectural diagram: 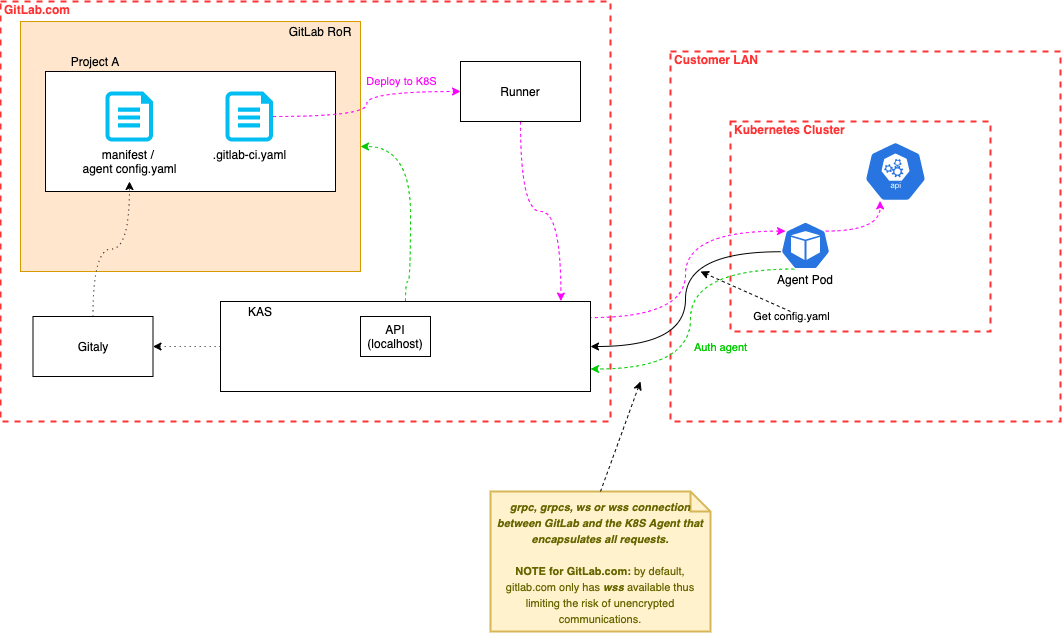 The data flow diagram we were using also evolved: 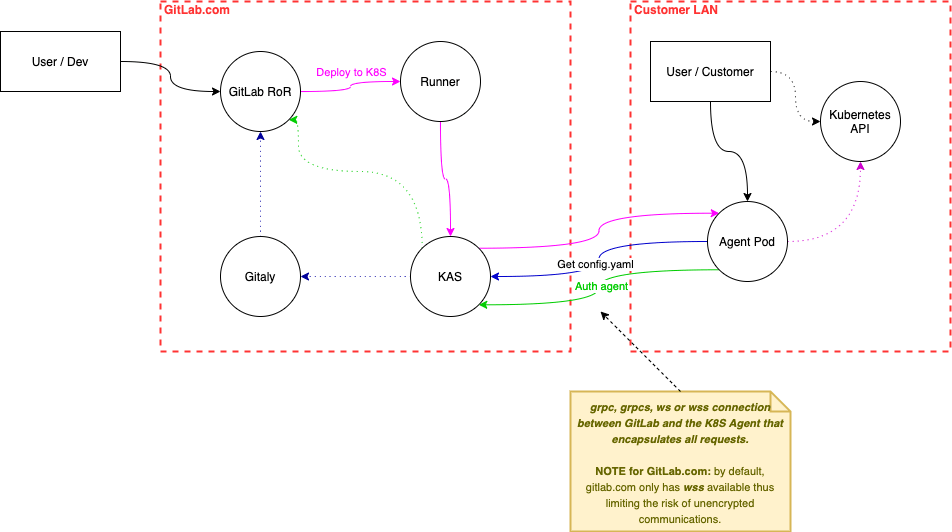 An evolved data flow diagram for the Kubernetes Agent.

And, naturally, as the features evolved, the threats evolved. Through our latest threat modeling we discovered that:

Threat modeling, just like anything in security, isn’t something you do once and are done with it. As we’ve seen with the reviews we’ve performed on the Kubernetes Agent, threat modeling involves iteration and constant adoption of ever-changing features and attack surfaces of a product.

Our threat model is now mature enough that it's an established process, performed as a separate review and merged into a dedicated repository at completion. In the future, we hope to be able to publicly share those threat models to help customers, the community and to continue strengthening our hackerone program.

For the next iterations we’re looking for broad adoption of threat modeling across GitLab's engineering teams and beyond. We plan to use our threat model as a way to improve asynchronous communication between the different security stable counterparts that operate across the organization. These stable counterparts ensure security practices are integrated early on in the development process and also allow us to ensure better coverage across vacations and time zones.

Until then, if you’re interested in more threat modeling details specific to Kubernetes itself, I highly recommend the Kubernetes Security Audit Working Group Kubernetes threat model. One of my fellow GitLab teammates, Marco Lancini has published a great post, “The Current State of Kubernetes Threat Modelling” on his personal blog which contains useful information on different methods used to perform a threat model for Kubernetes.

How to threat model

And, if you’re interested in how we’re rolling out threat modeling across GitLab, to teams beyond Security and Engineering, we’ve been tweaking our how to threat model guide to help as many team members as possible understand what threat modeling is and how and where to get started. Perhaps you’ll find some helpful tips and tricks there.

And, keep an eye on this space, we’re planning to revisit threat modeling in blog posts where we’ll dive deeper into the PASTA methodology we’re using and take a closer look at what threat modeling looks like in practice here at GitLab.

Also, I would like to take a moment to thank the Configure team and Mikhail for their awesome collaboration during the various threat models we have performed.

“Learn how we put our threat model into action, iteratively, at @gitlab as we threat modeled the #Kubernetes Agent.” – Vitor Meireles De Sousa