Andrew broke down the different ways Prometheus can be used for the attendees of Monitorama 2019. This blog post explains how anomaly detection works with Prometheus and includes the code snippets you’ll need to try it out for yourself on your own system.

Why is anomaly detection useful?

There are four key reasons why anomaly detection is important to GitLab:

For these reasons and many others, Andrew investigated whether it was possible to perform anomaly detection on GitLab time series data by simply using Prometheus queries and rules.

What level of aggregation is the correct one?

First, time series data must be aggregated correctly. Andrew used a standard counter of http_requests_total as the data source for this demonstration, although many other metrics can be applied using the same techniques.

This example metric has some extra dimensions: method, controller, status_code, environment, as well as the dimensions that Prometheus adds, such as instance and job.

Next, you must choose the correct level of aggregation for the data you are using. This is a bit of a Goldilocks problem – too much, too little, or just right – but it is essential for finding anomalies. By aggregating the data too much, it can be reduced to too few dimensions, creating two potential problems:

But by aggregating the data too little, you might end up with a series of data with very small sample sizes which can lead to false positives and could mean flagging genuine data as outliers.

Just right: Our experience has shown the right level of aggregation is the service level, so we include the job label and the environment label, but drop other dimensions. The data aggregation used through the rest of the talk includes: job http requests, rate five minutes, which is basically a rate across job and environment on a five-minute window.

Some of the primary principles of statistics can be applied to detecting anomalies with Prometheus.

Assuming the underlying data has a normal distribution, 99.7% of the samples should have a z-score between zero to three. The further the z-score is from zero, the less likely it is to exist. We apply this property to detecting anomalies in the Prometheus series.

Based on the statistical principles of normal distributions, we can assume that any value that falls outside of the range of roughly +3 to -3 is an anomaly. We can build an alert around this principle. For example, we can get an alert when our aggregation is out of this range for more than five minutes. 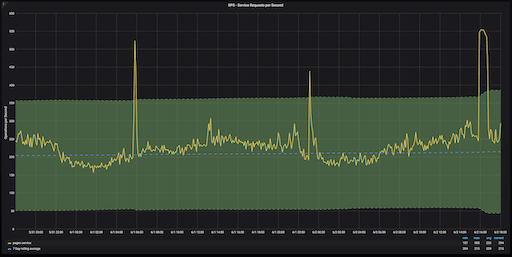 Z-scores are a bit awkward to interpret on a graph because they don’t have a unit of measurement. But anomalies on this chart are easy to detect. Anything that appears outside of the green area (which denotes z-scores that fall within a range of +3 or -3) is an anomaly.

What if you don’t have a normal distribution?

But wait: We make a big leap by assuming that our underlying aggregation has a normal distribution. If we calculate the z-score with data that isn’t normally distributed, our results will be incorrect.

There are numerous statistical techniques for testing your data for a normal distribution, but the best option is to test that your underlying data has a z-score of about +4 to -4.

If your results return with a range of +20 to -20, the tail is too long and your results will be skewed. Remember too that this needs to be run on an aggregated, not unaggregated series. Metrics that probably don’t have normal distributions include things like error rates, latencies, queue lengths etc., but many of these metrics will tend to work better with fixed thresholds for alerting anyway.

While calculating z-scores works well with normal distributions of time series data, there is a second method that can yield even more accurate anomaly detection results. Seasonality is a characteristic of a time series metric in which the metric experiences regular and predictable changes that recur every cycle.

This graph illustrates the RPS (requests per second) rates for Gitaly over seven days, Monday through Sunday, over four consecutive weeks. The seven-day range is referred to as the “offset,” meaning the pattern that will be measured.

Each week on the graph is in a different color. The seasonality in the data is indicated by the consistency in trends indicated on the graph – every Monday morning, we see the same rise in RPS rates, and on Friday evenings, we see the RPS rates drop off, week after week.

By leveraging the seasonality in our time series data we can create more accurate predictions which will lead to better anomaly detection.

How do we leverage seasonality?

Calculating seasonality with Prometheus required that we iterate on a few different statistical principles.

The first iteration is a bit narrow; we’re using a five-minute window from this week and the previous week to derive our predictions.

In the second iteration, we expand our scope by taking the average of a four-hour period for the previous week and comparing it to the current week. So, if we’re trying to predict the value of a metric at 8am on a Monday morning, instead of using the same five-minute window from one week prior, we use the average value for the metric from 6am until 10am for the previous morning.

We use the 166 hours in the query instead of one week because we want to use a four-hour period based on the current time of day, so we need the offset to be two hours short of a full week.

A comparison of the actual Gitaly RPS (yellow) with our prediction (blue) indicate that our calculations were fairly accurate. However, this method has a flaw.

GitLab usage was lower than the typical Wednesday because May 1 was International Labor Day, a holiday celebrated in many different countries. Because our growth rate is informed by the previous week’s usage, our predictions for the next week, on Wednesday, May 8, were for a lower RPS than it would have been had it not been a holiday on Wednesday, May 1.

On the graph we’ve plotted Wednesday, May 8 and three predictions for the three consecutive weeks before May 8. We can see that two of the predictions are good, but the May 1 prediction is still far off base.

Also, we don’t want three predictions, we want one prediction. Taking the average is not an option, because it will be diluted by our skewed May 1 RPS data. Instead, we want to calculate the median. Prometheus does not have a median query, but we can use a quantile aggregation in lieu of the median.

The one problem with this approach is that we're trying to include three series in an aggregation, and those three series are actually all the same series over three weeks. In other words, they all have the same labels, so connecting them is tricky. To avoid confusion, we create a label called offset and use the label-replace function to add an offset to each of the three weeks. Next, in the quantile aggregation, we strip that off, and that gives us the middle value out of the three.

Now, our prediction deriving the median value from the series of three aggregations is much more accurate.

How do we know our prediction is truly accurate?

We can update our Grafana chart to use the seasonal prediction rather than the weekly rolling average value. The range of normality for a certain time of day is shaded in green. Anything that falls outside of the shaded green area is considered an outlier. In this case, the outlier was on Sunday afternoon when our cloud provider encountered some network issues.

Using boundaries of ±2σ on either side of our prediction is a pretty good measurement for determining an outlier with seasonal predictions.

How to set up alerting using Prometheus

If you want to set up alerts for anomaly events, you can apply a pretty straightforward rule to Prometheus that checks if the z-score of the metric is between a standard deviation of +2 or -2.

At GitLab, we use a custom routing rule that pings Slack when any anomalies are detected, but doesn’t page our on-call support staff.

Watch Andrew’s full presentation from Monitorama 2019. If you have questions for Andrew, reach him on Slack at #talk-andrew-newdigate. You can also read more about why you need Prometheus.

“.@suprememoocow shows how @PrometheusIO query language can be used for anomaly detection in @gitlab” – Sara Kassabian