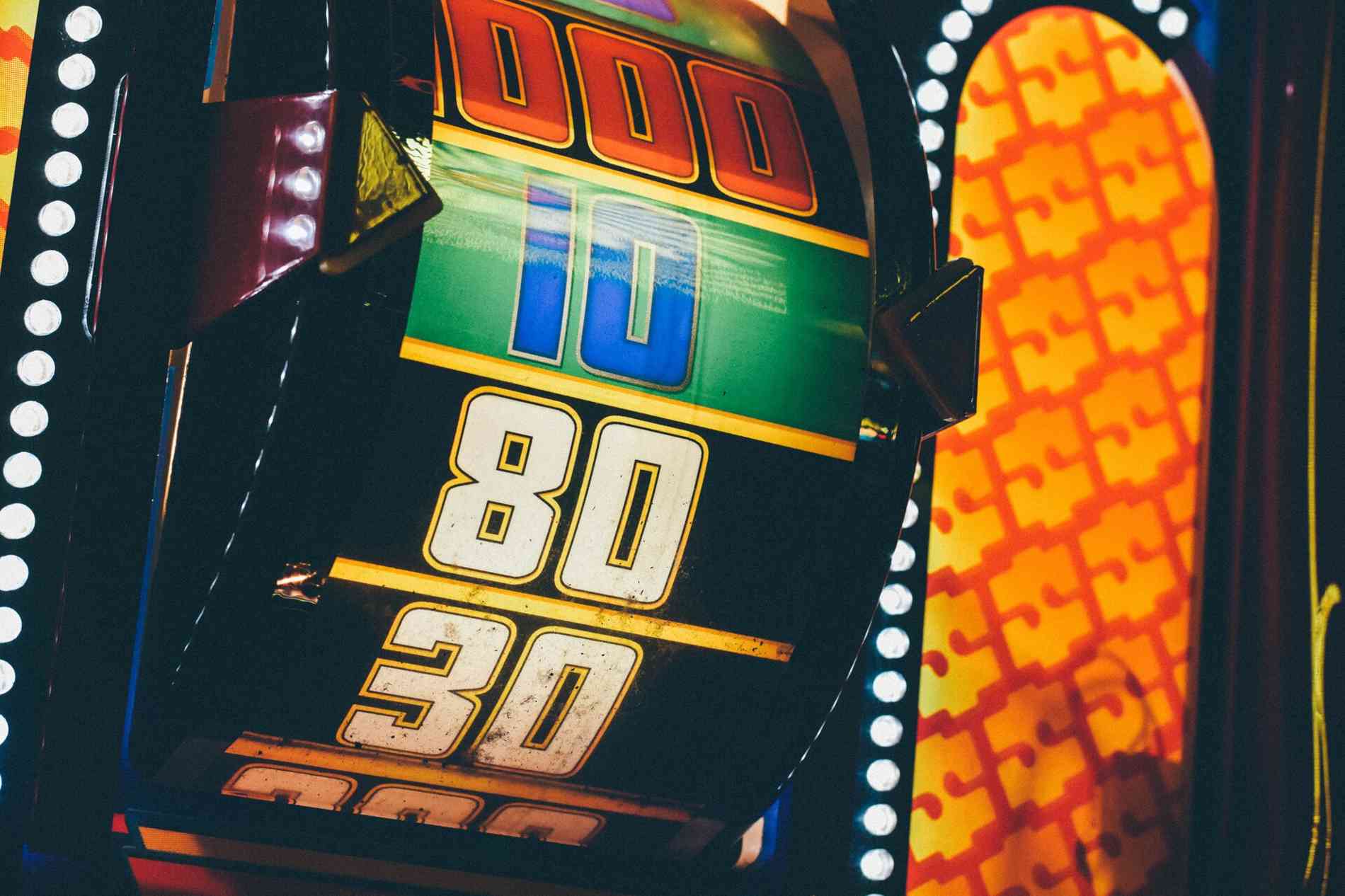 Just over a year ago, Dennis Tang introduced us to Reviewer Roulette. This was a shiny new tool designed to help us to find reviewers for our code. At the time, our engineering department had around 150 people in it. At GitLab, all our engineers are reviewers, but reviews were being unevenly distributed across them.

A year on, and with more than 380 people in engineering available to review, we're still using a form of Reviewer Roulette – but its implementation, and how we interact with it, has changed significantly. So, what's changed, and what's stayed the same?

First off, roulette works really well. Code reviews can be time-consuming, and they're a major part of quality control at GitLab, so it's crucial that we distribute the load – research shows that review quality nosedives if you spend too much time doing it. It's even more important for our maintainers. We try to maintain a ratio of engineers to maintainers of around 4:1, but if half of the reviews go to a quarter of the maintainers, some will experience it as 6:1, while others will experience it as 2:1.

Also, people could become familiar with certain reviewers and maintainers and habitually assign their work to the same people. This means that people who had been maintainers for longer tended to get more reviews. Without the randomization effect of Reviewer Roulette, this led to the creation of knowledge silos, where knowledge about a particular subject would be concentrated in a few individuals, rather than being spread across the organization.

Roulette solved this for us with almost no cognitive load, and could scale effortlessly as our engineering team expands significantly. Sometimes, I first learned someone new had joined the company through a review suggestion. The number and type of reviews a merge request needed was also increasing – I might need to find a reviewer and maintainer for frontend, backend, QA, database, documentation, and UX concerns before merging. It's a lot to keep track of manually!

Despite the advantages of Reviewer Roulette, I used it inconsistently after a few months, and never actually contributed any improvements to the code. The integration with Slack didn't fit my workflow very well because a chat channel is the last place I want to be when working on code! I like to treat Slack as the informal, asynchronous communication channel it is designed to be, but it is too easy to be sidetracked by ongoing conversations when popping in to get a reviewer recommendation.

Then, we began running into deployment problems, and sometimes Reviewer Roulette just wasn't available at all. It only took a few failed attempts before I fell out of the habit of trying to use it, and we never did get around to making the deployment work with Auto DevOps.

It turns out that I wasn't the only one having trouble with this iteration of Reviewer Roulette – we found that backend reviews were very unevenly distributed. Reviewer Roulette wasn't being used widely enough across GitLab for us to experience all the benefits, and as we geared up to add many more maintainers, fixing this tool became very important.

In the interim, staff backend engineer on Delivery, Yorick Peterse, introduced Danger bot into GitLab's CI pipeline and used it to enforce a fine set of coding standards that we couldn't quite express with Rubocop.

The new bot would leave polite messages on our MRs, asking us to write better commit messages, or to seek database review if we'd changed any files in db/. That last part got me thinking: Why couldn't the Danger bot pick a potential database reviewer for us at the same time? What was stopping it from detecting backend, frontend, or documentation changes, and using Reviewer Roulette to choose reviewers and maintainers right there in the merge request?

Very little, it turned out: 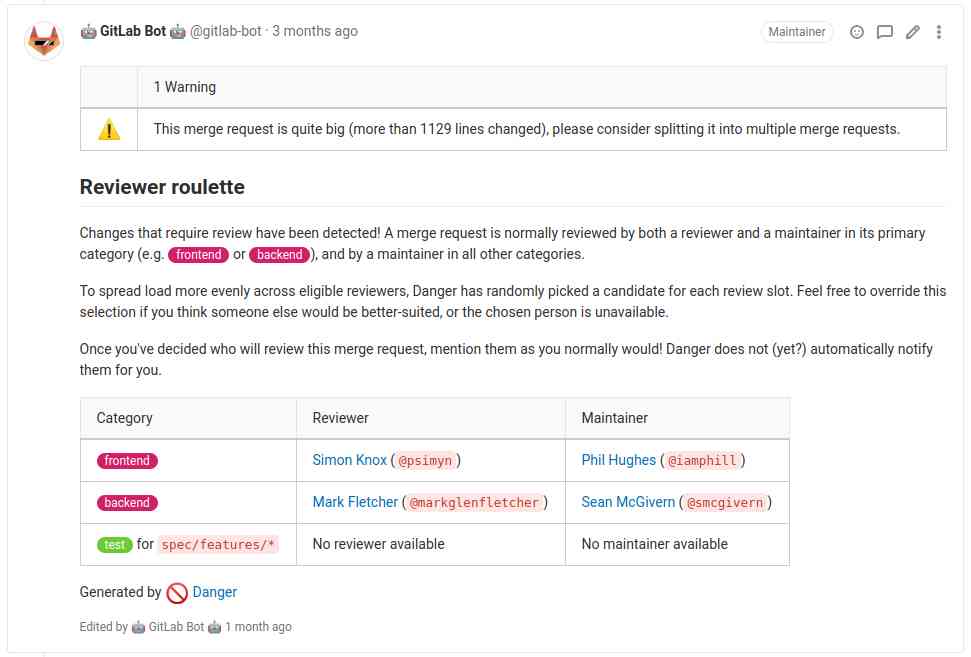 By making Reviewer Roulette happen automatically in the merge request itself, we removed all the barriers that were preventing us from using the tool. I no longer had to be on Slack to find a reviewer, instead the list was right there in the merge request as I went to change the assignee. Danger was guaranteed to run on every pipeline – there were no deployments or environments to worry about, and if it broke, fixing it was automatically high priority.

Contributing changes also became much easier – the code was right there in the GitLab repository, and changes took effect immediately (again, no deployments!).

The ChatOps version of Reviewer Roulette needed access to GitLab's Slack workspace to use and so it wasn't available to most of our community contributors beyond the core team. Moving Reviewer Roulette to Danger doesn't really solve this problem – it doesn't work well on forks of the gitlab-org/gitlab project so community contributors don't benefit. This problem is something I'd really like to fix in the future, not least because I work on a fork of GitLab day-to-day as well.

Danger is a good tool but it does have some limitations – in particular, danger local doesn't work for GitLab. This slows down development, since you have to commit and push changes to your merge request before you can see the effects.

Another big problem is that this most recent iteration of Reviewer Roulette only works for the gitlab project. None of our satellite projects - gitaly, gitlab-workhorse, gitlab-pages, gitlab-runner, etc. – can use this version of Reviewer Roulette. Similarly, users of GitLab haven't benefited from the work we've been doing on Roulette. Ideally, we would have built this as a feature within GitLab itself, so everyone could benefit from the tool.

By building Reviewer Roulette in Danger we've been able to protype and rapidly iterate to a solution that is working very well for the gitlab project. The next steps are to turn Reviewer Roulette into a feature that all users of GitLab can benefit from, perhaps by leveraging the CODEOWNERS file.

Do you have any ideas on how we can better integrate Reviewer Roulette into GitLab? Let us know by commenting in the epic or by opening a new issue!