Recently we finished migrating the GitLab.com monolithic Postgres database to two independent databases: Main and CI. After we decided how to split things up, the project took about a year to complete.

This blog post is part one in a three-part series. The posts give technical details about many of the challenges we had to overcome, as well as links to issues, merge requests, epics, and developer-facing documentation. Our hope is that you can get as much detail as you want about how we work on complex projects at GitLab.

We highlight the most interesting details, but anyone undertaking a similar project might learn a lot from seeing all the different trade-offs we evaluated along the way.

Back in early 2021, GitLab formed a "database sharding" team in an effort to deal with our ever-growing monolithic Postgres database. This database stored almost all the data generated by GitLab.com users, excluding git data and some other smaller things.

As this database grew over time, it became a common source of incidents for GitLab. We knew that eventually we had to move away from a single Postgres database. We were already approaching the limits of what we could do on a single VM with 96 vCPU and continually trying to vertically scale this VM would eventually not be possible. Even if we could vertically scale forever, managing such a large Postgres database just becomes more and more difficult.

Even though our database architecture has been monolithic for a long time, we already made use of many scaling techniques, including: 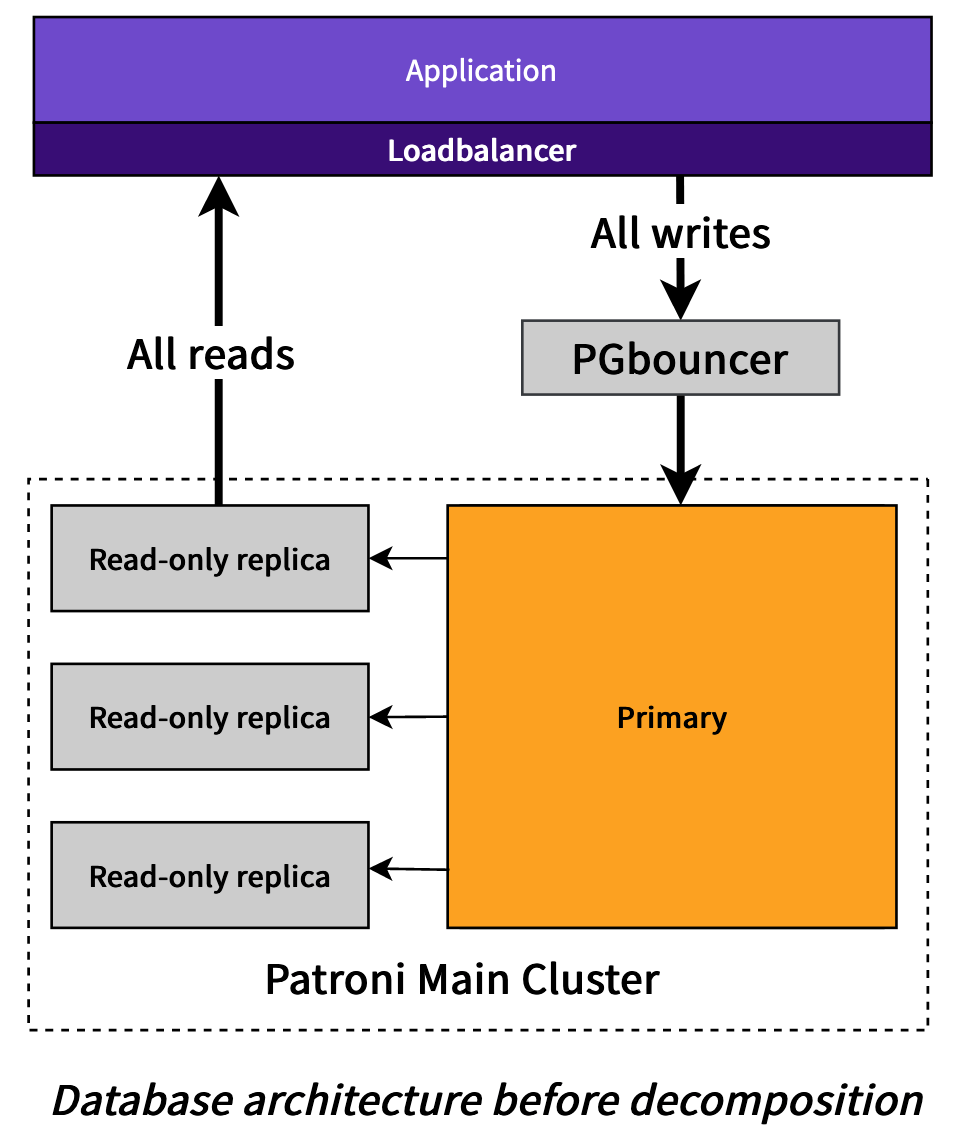 These approaches only got us so far and ultimately would never fix the scaling bottleneck of the number of writes that need to happen, because all writes need to go to the primary database.

The original objective of the database sharding team was to find a viable way to horizontally shard the data in the database. We started with exploring sharding by top-level namespace. This approach had some very complicated problems to solve, because the application was never designed to have strict tenancy boundaries around top-level namespaces. We believe that ultimately this will be a good way to split and scale the database, but we needed a shorter term solution to our scaling problems.

This is when we evaluated different ways to extract certain tables into a separate database. This approach is often referred to as "vertical partitioning" or "functional decomposition." We assumed this extraction would likely be easier, as long as we found a set of tables with loose coupling to the rest of the database. We knew it would require us to remove all joins to the rest of the tables (more on that later).

Figuring out where most write activity occurs

We did an analysis of:

We learned that CI tables (at the time) made up around 40% to 50% of our write traffic. This seemed like a perfect candidate, because splitting the database in half (by write traffic) would be the optimal scaling step.

We analyzed the data by splitting the database the following ways:

The next step was to see how viable it actually was.

Proving it can work

We never merged this proof of concept, but we progressively broke out changes into smaller merge requests or issues assigned to the appropriate teams to fix.

When tackling a large-scale architecture change, you might find yourself chasing a moving target.

To split the database, we had to change the application. Our code depended on all the tables being in a single database. These changes took almost a year.

In the meantime, the application was constantly evolving and growing, and with contributions from many engineers who weren't necessarily familiar with the CI decomposition project. This meant that we couldn't just start fixing problems. We knew we would likely find new problems being introduced at a faster rate than we could remove them.

To solve this problem, we took an approach that was inspired by how we handle new RuboCop rules. The idea is to implement static or dynamic analysis to detect these problems. Then we use this information to generate an allowlist of exceptions. After we have this allowlist of exceptions, we prevent any new violations from being created (as any new violations will fail the pipeline).

The result was a clear list to work on and visibility into our progress.

As part of making the application compatible with CI decomposition, we needed to build the following:

When we began this project, there were many improvements being added to Rails to support multiple databases. We wanted to make use of as much of this Rails built-in support as possible to minimize the amount of custom database connection logic we had to maintain.

One considerable challenge with this was our existing custom database load balancing logic. The development of this complex implementation spans a long period of time, and it was designed differently to how Rails connections were managed in the new multi-database support.

In the end, were able to use parts of Rails multiple database support, but we still hope to one day remove our custom logic and only use what is supported by Rails.

There were still some foreign keys that existed between CI and non-CI tables. We needed a way to remove these keys but still keep the functionality of cascading deletes.

In the end, we implemented a solution we call "loose foreign keys". This solution provides similar functionality and support for cascading NULLIFY or DELETE when a parent record is deleted in Postgres. It's implemented using Postgres on delete triggers, so it guarantees all deletes (including bulk deletes) will be handled. The trigger writes to another "queue" table in Postgres, which then is picked up by a periodic Sidekiq worker to clean up all the impacted child records.

When implementing this solution, we also considered the option of using ActiveRecord before_destroy callbacks. However they couldn't give us the same guarantees as Postgres foreign keys, because they can be intentionally or accidentally skipped.

In the end, the "loose foreign keys" solution also helped to solve another problem we have, where very large cascading deletes cause timeouts and user experience issues. Because it's asynchronous, we could easily control timing and batch sizes to never have database timeouts and never overload the database with a single large delete.

One of the most difficult dependencies between CI and Main features in GitLab is how CI Runners are configured. Runners are assigned to projects and groups which then dictates which jobs they will run. This meant there were many join queries from the ci_runners table to the projects and namespaces tables. We solved most of these issues by refactoring our Rails code and queries, but some proved very difficult to do efficiently.

To work around this issue, we implemented a mechanism to mirror the relevant columns on projects and namespaces to the CI database.

It's not ideal to have to duplicate data that must be kept up-to-date like this, but while we expected this may be necessary in a few places, it turns out that we only ended up doing this for those two tables. All other joins could be handled without mirroring.

An important part of our mirroring architecture is periodic consistency checking. Every time this process runs, it takes a batch of the mirrored rows and compares them with the expected values. If there is a discrepancy, it schedules them to be fixed. After it's done with this batch, it updates a cursor in Redis to be used for the next batch.

A key part of ensuring our live migration went as smooth as possible was by making it as small as possible. This was quite difficult as the migration from 1 database to 2 databases is a discrete change that seems hard to break up into smaller steps that can be rolled out individually.

One early insight was that we could actually reconfigure GitLab.com ahead of time so that the Rails application behaved as though it was talking to two separate databases long before we actually split the databases. Basically the idea was that the Rails processes already had two separate database connections, but ultimately they were going to the same database. We could even break things out further since our read-only connections are designed to read from slightly delayed replicas. So we could already have read-only connections going to the newly created CI read-only replicas before the migration. 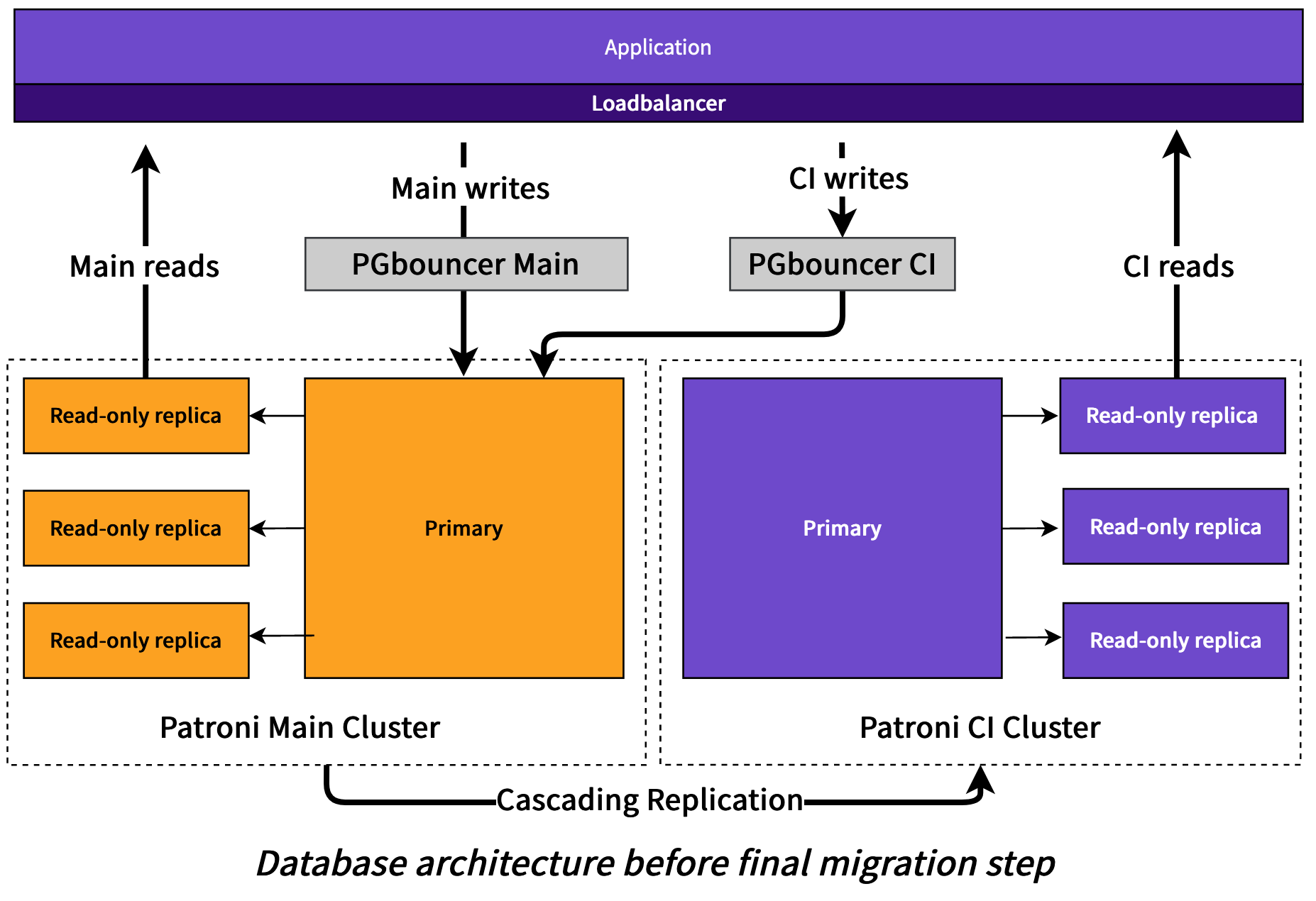 These insights led to our seven-phase migration process. This process meant that by the time we got to the final migration on production (Phase 7), we were already incredibly confident that the application would work with separate databases and the actual change being shipped was just trivial reconfiguration of a single database host. This also meant that all phases (except for Phase 7) had a very trivial rollback process, introduced very little risk of incident and could be shipped before we were finished with every code change necessary to make the application support two databases.

The seven phases were:

Now that we had a clear set of phases we could prioritize our work. All issues were assigned scoped labels based on the specific phase they corresponded to. Since the work spanned many teams in development and infrastructure, those teams could use the label to easily tell which issues needed to be worked on first. Additionally, since we kept an up-to-date timeline of when we expected to ship each phase, each team could use the phase label to determine a rough deadline of when that work should get done to not delay the project. Overall there were at least 193 issues over all phases. Phase 1 and 2 were mostly infrastructure tasks tracked in a different group and with different labels, but the other phases contained the bulk of the development team requirements:

You can read more about the final migration process and results of the migration in Part 2.

“How we decomposed the GitLab backend database - part one of a three-part series.” – Dylan Griffith