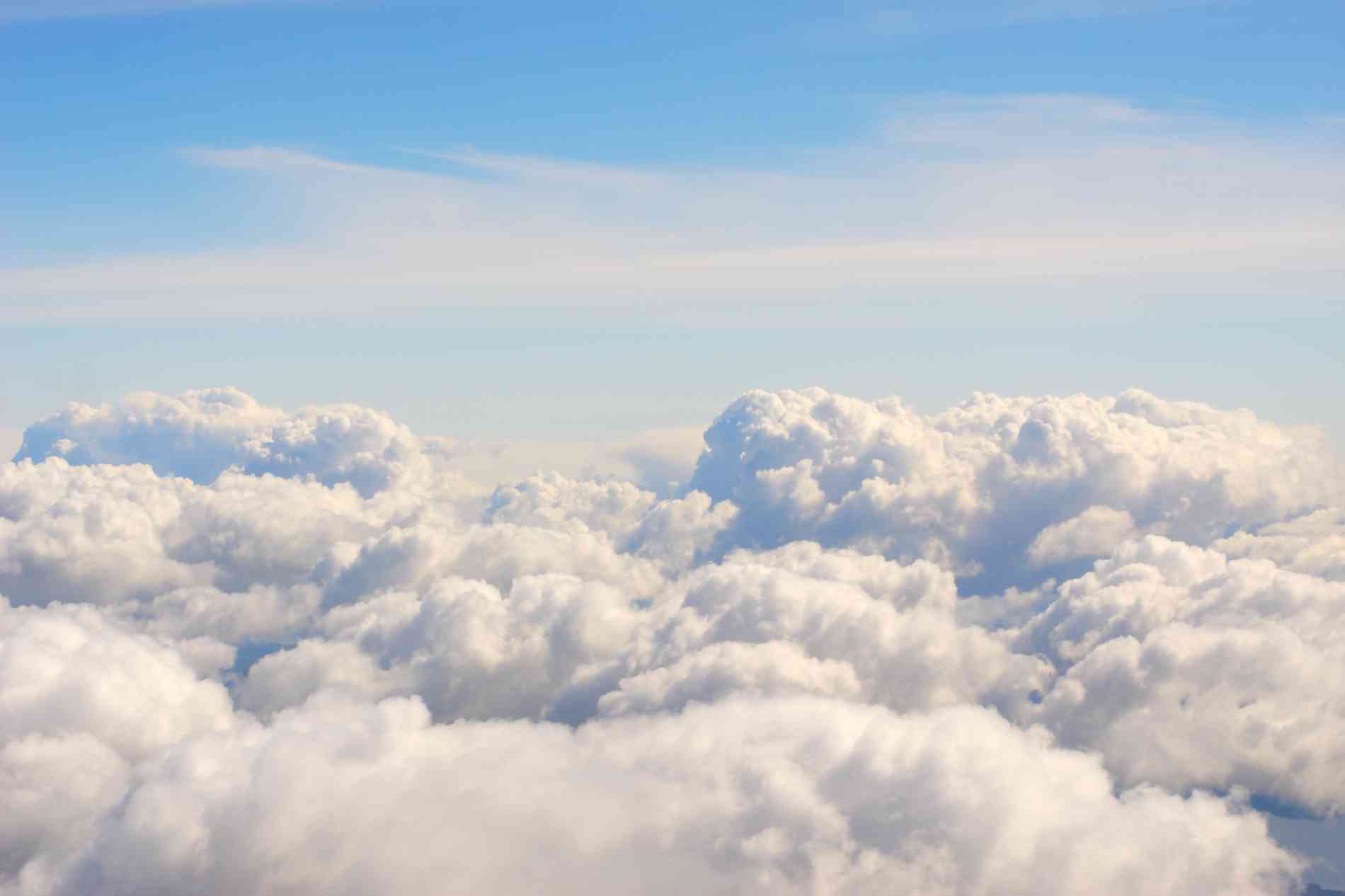 It's the most common response to anyone who hears the term “Kubernetes” for the first time. If Kubernetes is, quite literally, Greek to you, then this blog post and the corresponding video are two good places to start.

While at Contribute 2019, senior solutions manager Brendan O’Leary gave a presentation explaining the nuts and bolts of Kubernetes and how we use this open source tool at GitLab.

“Kubernetes is an open source system for automating deployment, scaling, and management of containerized applications,” according to the Cloud Native Computing Foundation (CNCF).

So a system that keeps the system how we want it to be, what does that mean exactly?

To understand what Kubernetes is and what it does, it’s best to dig a bit deeper into the origin story of this technology.

The journey to Kubernetes started at Google, when infrastructure developers were searching for a way to deploy new applications on hundreds of thousands of globally distributed servers. The result was Borg, a private tool developed by Google engineers for this purpose. The engineers iterated on Borg to launch Project Seven – an open source project that wasn’t entirely Borg, but took elements of Borg to produce version 1.0 of Kubernetes.

Kubernetes, which translates from Greek to “pilot," “helmsman,” or "governor," is managed by CNCF, a foundation created by Google and Linux to house Kubernetes and other open source computing projects.

The benefits of Kubernetes

Kubernetes is highly portable across multiple cloud platforms and simplifies container management across however many of them are in use. Kubernetes make it easy to achieve greater scalability, flexibility, and productivity.

Another big benefit of Kubernetes is of course the fact that it’s open source – it’s continuously improved and updated so that there are minimal workflow interruptions.

What features does Kubernetes offer?

Kubernetes is one of the fastest growing open-source software projects around today. Here are some of the reasons why:

The role of containers

Containers are a lightweight technology that lets you securely run an application and its dependencies without impacting other containers or your operating system (OS). This makes containers more nimble and scalable than using other tools for application management, like virtual machines (VMs) or bare metal. Like VMs, containers can repeat the application as it’s in development, but unlike VMs, the container does not duplicate the OS each time and instead shares the infrastructure, container technology (e.g., Docker), and OS with the host computer. Containers are lightweight and easier to run on the cloud because the OS is not duplicated along with the application, but container technology can be challenging to manage without a tool.

“As you get more and more containers… it has a huge advantage technically, but it really creates a mess as to how are we managing all these containers,” says Brendan. “And there’s another problem – bare metal, virtual machines, containers, these all assume to some extent that you know what's going on with the computer that's running them.” 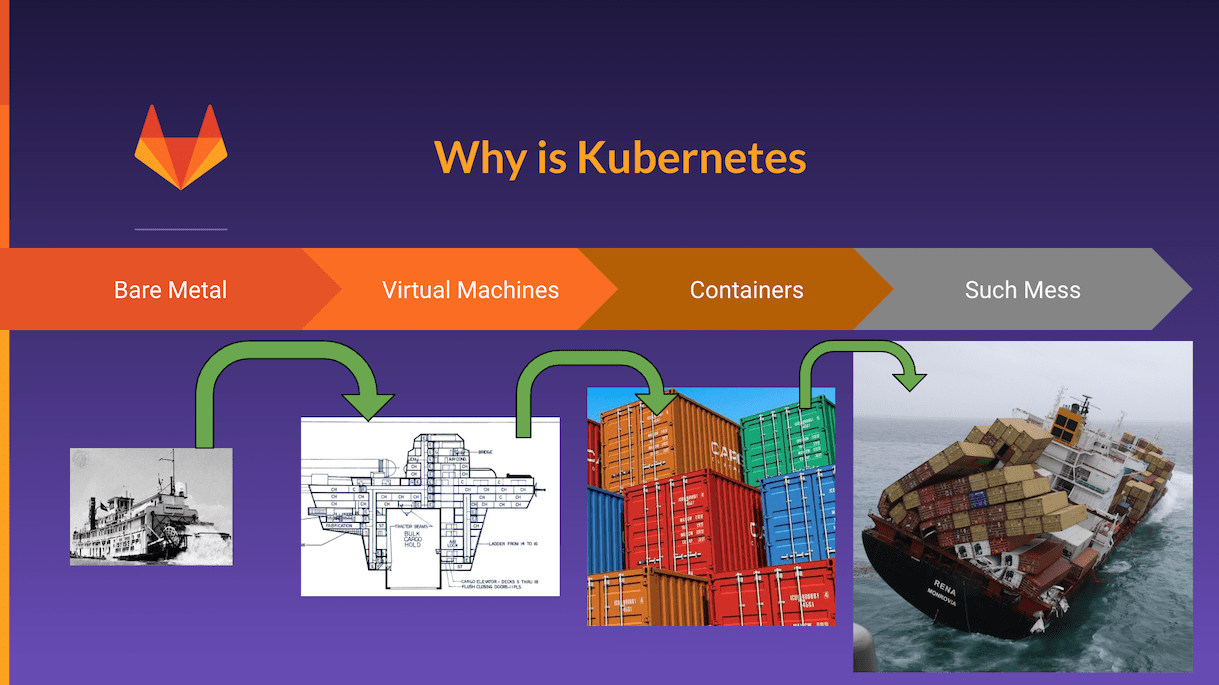 Containers make application deployment simpler, but containers are hard to orchestrate without a tool like Kubernetes.

But orchestrating the various application deployments in containers is a level of abstraction that is difficult for the human mind to grapple with and is challenging to manage manually, which is where Kubernetes comes in.

Kubernetes is an open source container orchestrator that automates container management from deployment to scaling and operating.

There are a few key advantages to using Kubernetes, namely that the technology takes an extremely abstract method of application management – containers – and schedules the deployments to occur automatically.

Brendan mentions other advantages to using Kubernetes, including that is can run routine health checks and is a very self-healing technology. A second key advantage to using Kubernetes for DevOps is that it is a declarative technology at its core. By using the desired state manager, you can describe how you want your application to run and Kubernetes makes it happen.

There are plenty of other buzzwords and phrases that are associated with Kubernetes, and Brendan dives into some of them in his presentation (captured in the video below). More concepts are explained on the Kubernetes website at CNCF.

There are three key touchpoints between GitLab and Kubernetes:

Is Kubernetes easy to use?

Everyone’s favorite answer: it depends. As with any software, there’s a learning curve to using Kubernetes (like having a basic understanding of how containers work). And it also may not be the right software fit for your needs. But if it is, adopting it doesn’t have to be complicated.

Kubernetes gives users the basic building blocks for creating developer projects while still allowing user flexibility where it’s needed. It can get a little more labor-intensive if users choose to build their own Kubernetes clusters rather than letting the service do it for them. But most companies don’t choose this route.

If you have more questions, like why the heck Kubernetes is abbreviated to K8s, or are searching for more resources, you’re in luck. Brendan dives into more detail about some of the etymology, key concepts, vocabulary and even pop culture that shapes Kubernetes in his presentation. Watch the video below to learn more about how Kubernetes has been the impetus behind a major shift toward cloud native in the DevOps industry, and why we’re on the front lines of that change here at GitLab.

Kubernetes and the open source community: A conversation between GitLab CEO Sid Sijbrandij and the co-creator of Kubernetes, Joe Beda.

Kubernetes, containers, cloud native – the basics: Get a quick overview of the key Kubernetes concepts.

“Head in the clouds when it comes to #Kubernetes? Get back down to earth with a lesson in the core concepts in cloud native” – Sara Kassabian