In early October, I asked the community to share your AWS Lambda tooling habits, so we can better serve your needs from within GitLab. This blog post presents the results of that survey. The survey was shared on Reddit, some Facebook Groups, and on the GitLab Twitter and Facebook channels. All told we received 58 responses which makes the results thought-provoking, but certainly not conclusive.

So, what did I ask you about? I had a few assumptions in mind when I put together the survey.

Besides testing these assumptions, I wanted to learn about usage habits with respect to:

Who answered the survey? 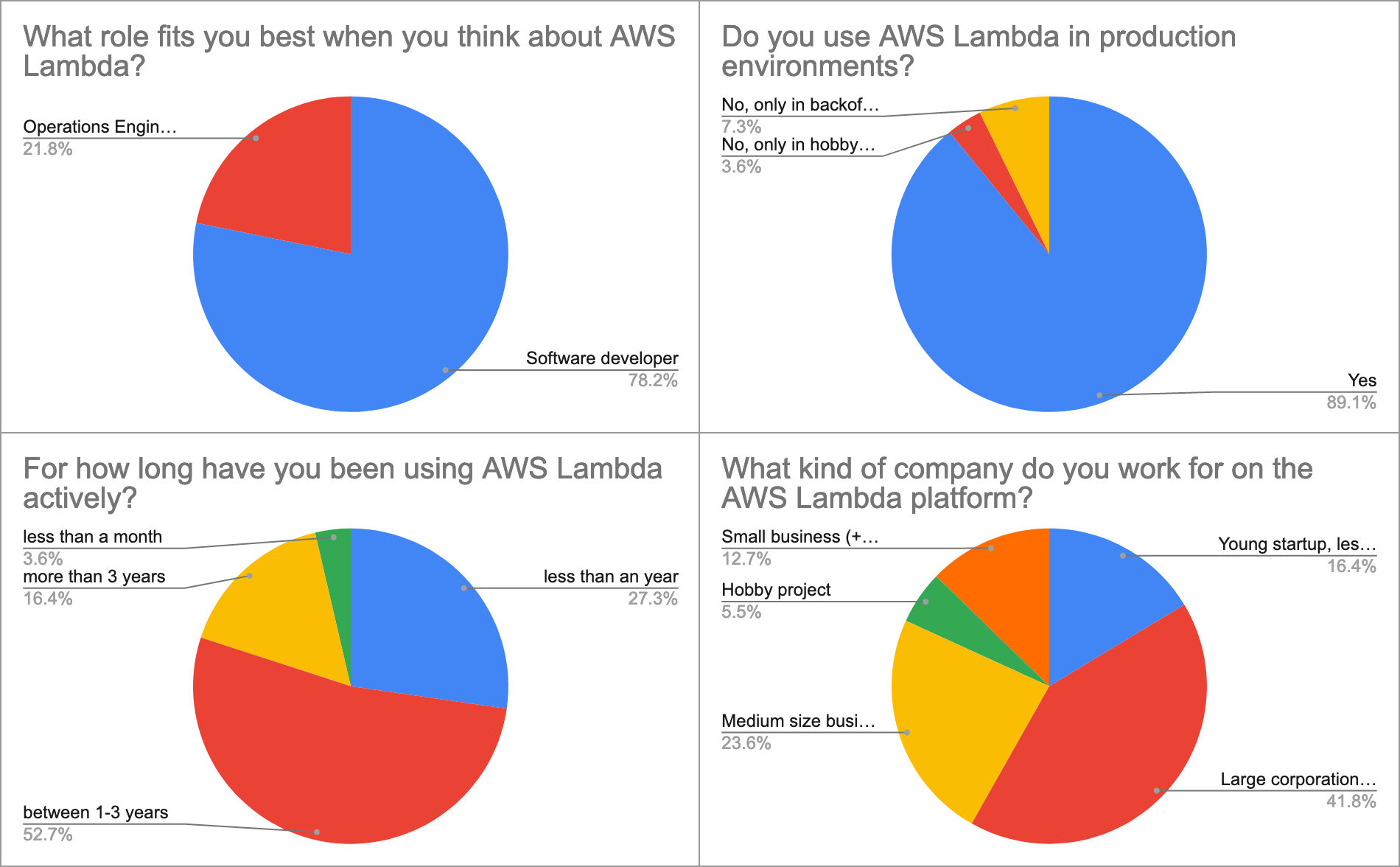 How do we write code for AWS Lambda

The first interesting topic was what frameworks were being used for AWS Lambda. It was possible to select multiple options and responders could even provide a free text answer. 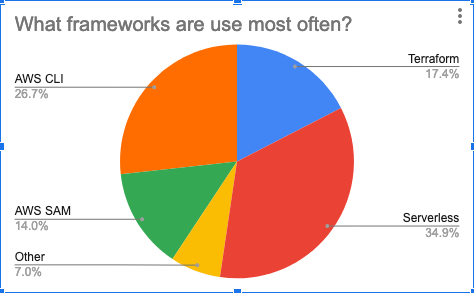 As many responders chose more than just a single option, we should look a bit behind the data to understand more. From that you can see that the serverless framework is popular with these respondents and its use is wide-spread. The Other section is quite scattered and there are no other big players; responses included Zappa, Chalice, Netlify function, etc.

I thought that there might be differences once I controlled for the company size. I expected more Terraform and less CLI usage as the company size increases. I didn't look into statistical significance, but a simple eye-ball test shows that SMBs are going heads down with tech stacks. They are the strongest users of both serverless and Terraform. I'd say that enterprise users try to follow along, but have a quite big direct usage of AWS CLI too. Why might this be true? A few scenarios come to mind that can think about:

When asked about the challenges serverless technologies pose one topic repeatedly arose: the lack of good testing infrastructure.

At GitLab we strive to provide outstanding CI/CD capabilities for testing. We also work hard to spread best practices.

I asked the community about the current approaches they take to CI/CD and testing. Here again, multiple answers were allowed. 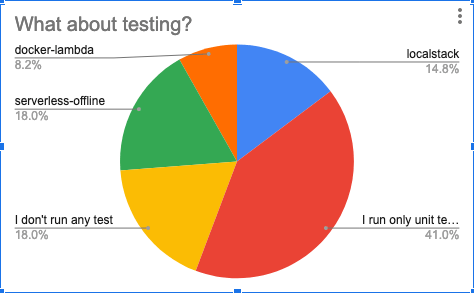 This pie chart is filtered to show only non-hobby projects. Even here, almost every fifth project has no testing at all! Otherwise, we can barely speak about test pyramids here as the majority of the projects either don't run any tests or run only unit tests.

Getting into the data by company size, we see what we would expect: as the company size grows, testing becomes more important.

The survey also contained a question about which CI/CD tools are being used. I skipped the analysis here. As the survey was mostly shared by GitLab team members, and through GitLab channels, clearly the majority of responders use GitLab. A wise choice!

Alongside developing and deploying software, thinking about its operational health in production is just as important. This led me to ask a few questions on Lambda monitoring habits. 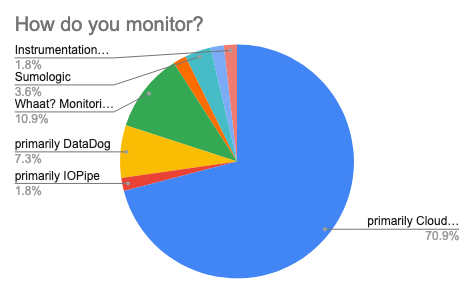 Even given the small sample size, I was surprised the vast majority choose AWS CloudWatch. I expected most production environments would use more advanced instrumentation, and I was wrong.

A related question I asked is, "What metrics are you most interested in?" This was a free-text answer. There were no surprises here with "error rates" coming out as the clear winner.

Based on the survey it became clear that even today, GitLab can be used very well with AWS lambda. To make getting started easy, we've created a project template that uses GitLab Pages to host the frontend of your app, and AWS Lambda for your backend needs. Besides the basic hosting needs, our templates have serverless-offline support added, so you can start writing tests against it without any additional setup needed. You can easily begin by starting a new project using the Serverless Framework/JS template.

These were the insights I gathered about the data. Because this data was provided by the community, I'm making it available to everyone. You can download the responses as a csv. In case you are serious about Serverless usage in production, I'd love to hear your insights! Feel free to reach out to me!

“GitLab and AWS Lambda do play very nicely together. Here's how to get started” – Viktor Nagy