When we heard about fastlane, an app automation tool for delivering iOS and Android builds, we wanted to give it a spin to see if a combination of GitLab and fastlane could help us bring our mobile build and deployment automation to the next level. You can see an actual production deployment of the Gitter Android app that uses what we'll be implementing in this blog post; suffice to say, the results were fantastic and we've become big believers that the combination of GitLab and fastlane is a truly game-changing way to enable CI/CD for your mobile applications. With GitLab and fastlane we're getting, with minimal effort:

If you'd like to jump ahead and see the finished product, you can take a look at the already-completed Gitter for Android .gitlab-ci.yml, build.gradle, Dockerfile, and fastlane configuration.

We'll begin first by setting up fastlane in our project, make a couple key changes to our Gradle configuration, and then wrap everything up in a GitLab pipeline.

fastlane has pretty good documentation to get you started, and if you run into platform-specific trouble it's the first place to check, but to get under way you really just need to complete a few straightforward steps.

First up, you need to get fastlane installed locally and initialize your product. We're using the Ruby fastlane gem so you'll need Ruby on your system for this to work. You can read about other install options in the fastlane documentation.

Once your Gemfile is updated, you can run bundle update to update/generate your Gemfile.lock. From this point you can run fastlane by typing bundle exec fastlane. Later, you'll see that in CI/CD we use bundle install ... to ensure the command runs within the context of our project environment.

Now that we have fastlane ready to run, we just need to initialize our repo with our configuration. Run bundle exec fastlane init from within your project directory, answer a few questions, and fastlane will create a new ./fastlane directory containing its configuration.

supply is a feature built into fastlane which will help you manage screenshots, descriptions, and other localized metadata/assets for publishing to the Google Play Store.

Please refer to these detailed instructions for collecting the credentials necessary to run supply.

Once you've set this up, simply run bundle exec fastlane supply init and all your current metadata will be downloaded from your store listing and saved in fastlane/metadata/android. From this point you're able to manage all of your store content as-code; when we publish a new version to the store later, the versions of content checked into your source repo will be used to populate the entry.

The ./fastlane/Appfile is pretty straightforward, and contains basic configuration you chose when you initialized your project. Later we'll see how to inject the json_key_file in your CI/CD pipeline at runtime.

The ./fastlane/Fastfile is more interesting, and contains the first changes you'll see that we made for Gitter vs. the default one created when you run bundle exec fastlane init.

The first section contains our definitions for how we want to run builds and tests. As you can see, this is pretty straightforward and builds right on top of your already set up Gradle tasks.

Creating Gradle tasks that publish/promote builds can be complicated and error prone, but fastlane makes this much easier by giving you pre-built commands (called Actions) that let you perform complex tasks with just a few simple actions.

In our example, we've set up a workflow where a new build can be published to the internal track and then optionally promoted through alpha, beta, and ultimately production. We initially had a new build for each track but it's safer to have the same/known build go through the whole process.

An important note is that we've only scratched the surface of the kinds of actions that fastlane can automate. You can read more about available actions here, and it's even possible to create your own.

We also made a couple of key changes to our basic Gradle configuration to make publishing easier. Nothing major here, but it does help us make things run a little more smoothly.

The first changed section gathers the secret variables to be used for signing. These are either loaded via configuration file, or gathered from environment variables in the case of CI.

We also set up automatic versioning using environment variables VERSION_CODE, VERSION_SHA, which we will set up later in CI/CD (locally they will just be null which is fine). Because each build's versionCode that you submit to the Google Play Store needs to be higher than the last, this makes it simple to deal with.

When using App Signing by Google Play, you will use two keys: the app signing key and the upload key. You keep the upload key and use it to sign your app for upload to the Google Play Store.

IMPORTANT: Google will not re-sign any of your existing or new APKs that are signed with the app signing key. This enables you to start testing your app bundle in the internal test, alpha, or beta tracks while you continue to release your existing APK in production without Google Play changing it.

Setting up the Docker build environment

We are building a Docker image to be used as a repeatable, consistent build environment which will speed things up because it will already have the dependencies downloaded and installed. We're just fetching a few prerequisites, installing the Android SDK, and then grabbing fastlane.

With our build environment ready, let's set up our .gitlab-ci.yml to tie it all together in a CI/CD pipeline.

The first thing we do is define the stages that we're going to use. We'll set up our build environment, do our debug and release builds, run our tests, deploy to internal, and then promote through alpha, beta, and production. You can see that, apart from environment, these map to the lanes we set up in our Fastfile.

Next up we're going to update our build environment, if needed. If you're not familiar with .gitlab-ci.yml it may look like there's a lot going on here, but we'll take it one step at a time. The very first thing we do is set up an .updateContainerJob yaml template which can be used to capture shared configuration for other steps that want to use it. In this case, it will be used by the subsequent updateContainer and ensureContainer jobs.

In this case, since we're dealing with Docker in Docker (dind), we are running some scripts which log into the local GitLab container registry, fetch the latest image to be used as a layer cache reference, build a new image, and finally push the new version to the registry.

The first job that inherits .updateContainerJob, updateContainer, only runs if the Dockerfile was updated and will run through the template steps described above.

Because the first pipeline on a branch can fail, the only: changes: Dockerfile syntax won't trigger for a subsequent pipeline after you fix things. This can leave your branch without a Docker image to use. So the ensureContainer job will look for an existing image and only build one if it doesn't exist. The one downside to this is that both of these jobs will run at the same time if it is a new branch.

With our build environment ready, we're ready to build our debug and release targets. Similar to above, we use a template to set up repeated steps within our build jobs, avoiding duplication. Within this section, the first thing we do is set the image to the build environment container image we built in the previous step.

Next up is a step that's specific to Gitter, but if you use shared assets between a iOS and Android build you might consider doing something similar. What we're doing here is grabbing the latest mobile artifacts built by the web application pipeline and placing them in the appropriate location.

Next, we use project-level variables containing a binary (hex) dump of our signing keystore file and convert it back to a binary file. This allows us to inject the file into the build at runtime instead of checking it into source control, a potential security concern. To get the signing_jks_file_hex variable hex value, we use this binary -> hex command, xxd -p gitter-android-app.jks

Here we're setting the version at runtime – these environment variables will be used by the Gradle build as implemented above. Because $CI_PIPELINE_IID increments on each pipeline, we can guarantee our versionCode is always higher than the last and be able to publish to the Google Play Store.

Next, we automatically generate a changelog to include by copying whatever you have in CURRENT_VERSION.txt to the current <versionCode>.text. You can update CURRENT_VERSION.txt as necessary. I won't dive into the details of the MR creation script here since it's somewhat specific to Gitter, but if you're interested in how something like this might work check out the create-changlog-mr.sh script.

Just a couple of final items: First, whenever a build job is done, we remove the jks file just to be sure it doesn't get saved to artifacts, and second we set up the artifact directory from where the output of the build (.apk) will be saved.

Most of the complexity here was set up in the template, so as you can see our buildDebug and buildRelease job definitions are very clear. Both just call the appropriate fastlane task (which, if you remember, then calls the appropriate Gradle task). The buildRelease output is associated with the production environment so we can define an extra production-scoped set of project-level variables which are different from our testing variables.

Since we set up code signing in the Gradle config (build.gradle) earlier, we can be confident here that our release builds are appropriately signed and ready for publishing.

Testing is really just another instance of the same thing, but instead of calling one of the build lanes we call the test lane. Note that we are using a dependency from the buildDebug job to ensure we don't need to rebuild anything.

Now that our code is being built, we're ready to publish to the Google Play Store. We only publish to the internal testing track and promote this same build to the rest of the tracks.

This is achieved through the fastlane integration, using a pre-built action to handle the job. In this case we are using a dependency on the buildRelease job, and creating a local copy of the Google API JSON keyfile (again stored in a project-level variable instead of checking it into source control.) We have this job (and all subsequent jobs) set to run only on manual action so we have full human control/intervention from this point forward. If you prefer to continuously deliver to your internal track you'd simply need to remove the when: manual entry and you'd have achieved your goal.

If you're like me, this may seem too easy to work. With everything we've configured in GitLab and fastlane to this point, it's really this simple!

As indicated earlier, promotion through alpha, beta, and production are all manual jobs. If internal testing is good, it can be promoted one step forward in sequence all the way through to production using these manual jobs.

If you're with me to this point, there's really nothing new here and this really highlights the power of GitLab with fastlane. We have a .promote_job template job which creates the local Google API JSON key file and the promote jobs themselves are basically identical.

The last step is to make sure you set up the project-level variables we used throughout the configuration above:

If you are using the same create-changlog-mr.sh script as us, 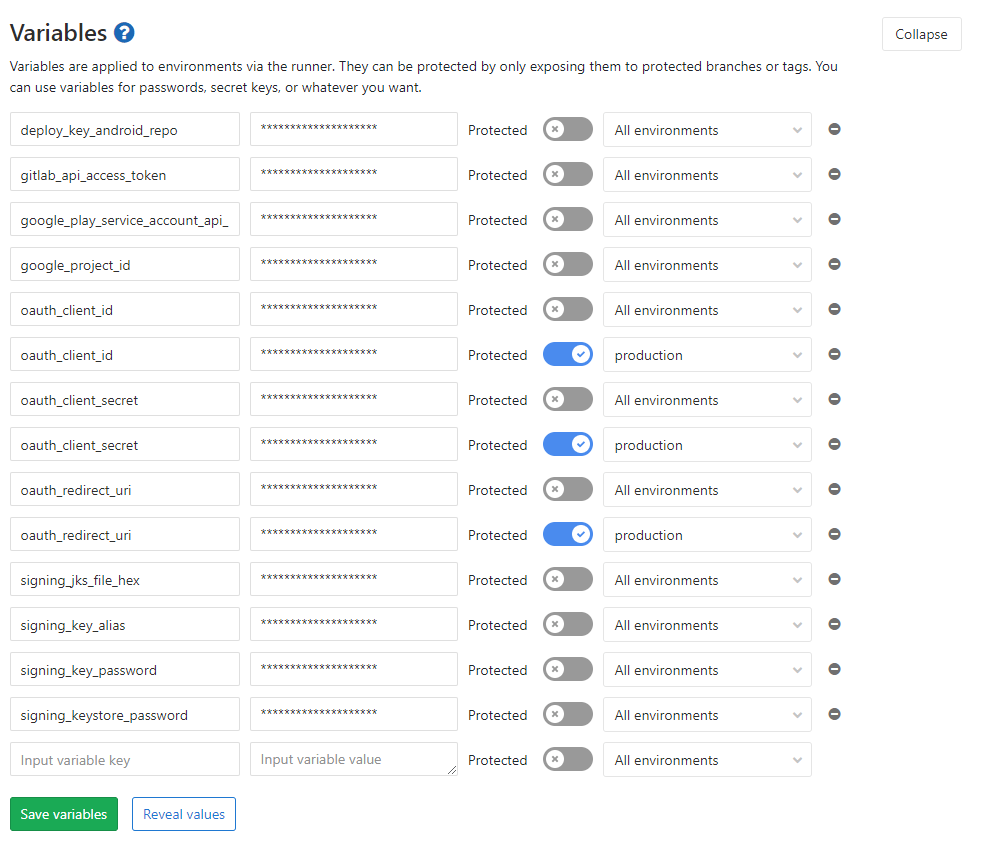 Using this configuration we've got Gitter for Android building, signing, deploying to our internal track, and publishing to production as frequently as we like. Next up will be to do the same for iOS, so watch this space for our next post!

Photo by Patrick Tomasso on Unsplash