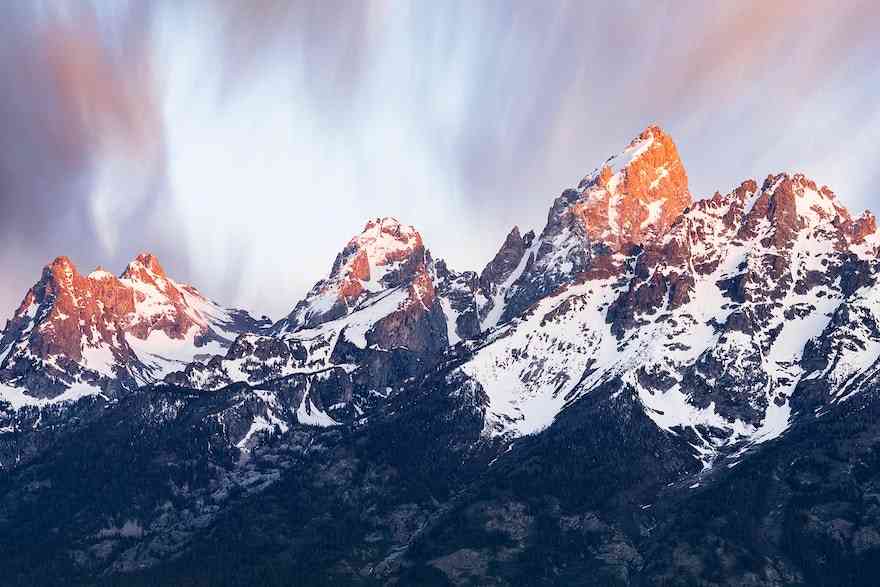 In the previous post, titled 3 ways to approach GitOps, we discussed the many benefits and options that GitLab supports for fulfilling the GitOps requirements of customers, whose IT environments are composed of heterogeneous technologies and infrastructures. This post is a 3-part series, in which we delve deeper into these options. In this first part, we cover the pull-based or agent-based approach.

About a pull-based or agent-based approach

In the following example, the reconciliation loop is made up of two components: an agent running on the Kubernetes cluster and a server-side service running on the GitLab instance. One of the benefits of this approach is that you don’t have to expose your Kubernetes clusters outside your firewall. Another benefit is its distributed architecture, in that agents running on the infrastructure components are in charge of correcting any drift relieving the server-side from resource consumption. This approach requires the maintenance and installation of agents on all infrastructure components you want to be part of your GitOps flows.

GitLab Agent for Kubernetes as a pull-based approach

The high-level architecture of the GitLab Agent for Kubernetes is depicted below: 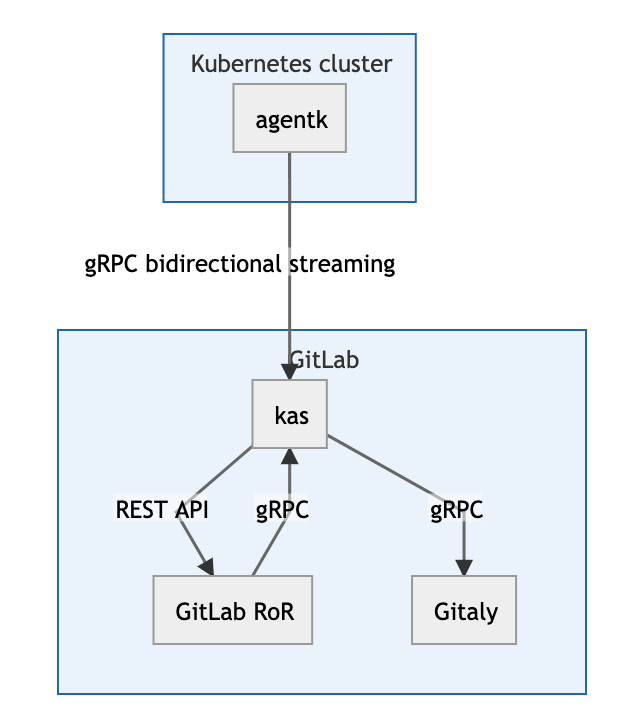 The agentk is installed on your Kubernetes cluster and it is the component that applies updates to the infrastructure. The kas is installed on the GitLab instance and it manages the authentication and authorization between agentk instances and GitLab, monitors projects for any changes and gathers latest project manifests to send to agentk instances.

NOTE: on Gitlab.com, the kas is installed and maintained by GitLab. On self-managed instances, the customer needs to install it.

In the following self-managed instance example, we go through a GitOps flow that leverages the pull-based approach to GitOps. After the agentk component has already been installed on the K8s cluster, the user proceeds to log on to the GitLab instance and creates a project called gitops-project: 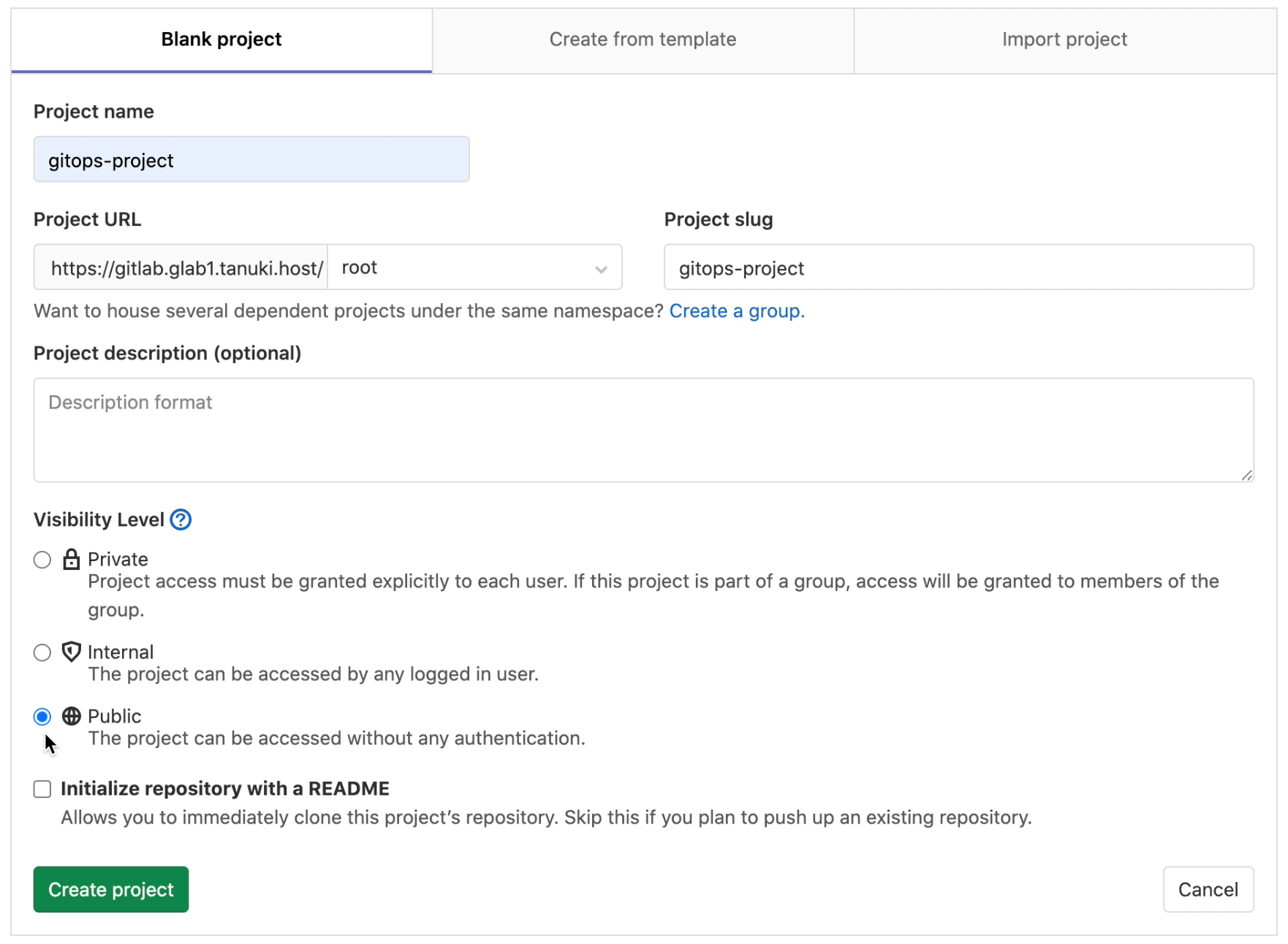 Next, the user creates a Kubernetes agent configuration repository project, kubernetes-agent, which will contain information pertinent to the kas component. 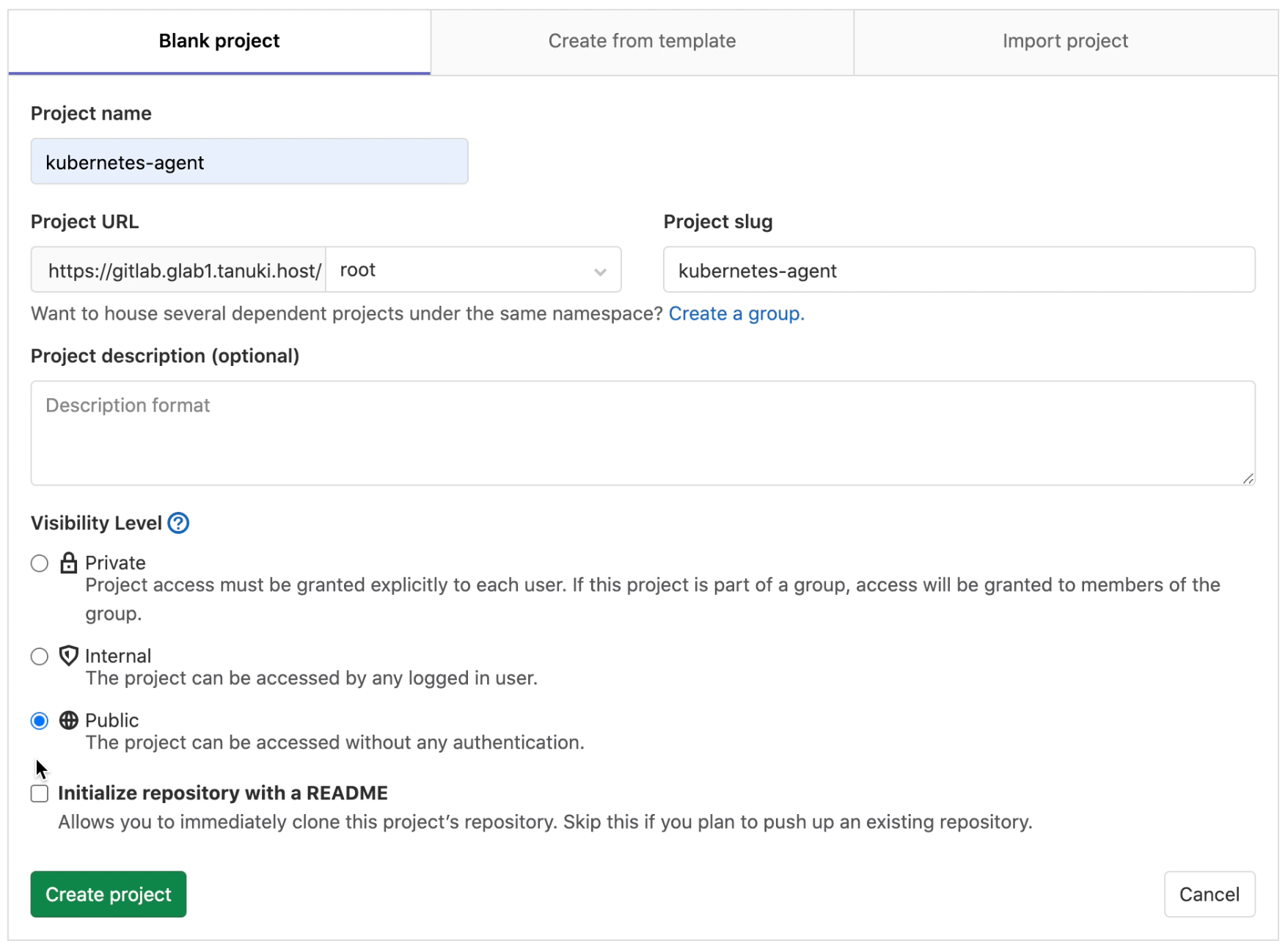 Within the kubernetes-agent project, the user creates a subdirectory .gitlab/agents/agent1, where agent1 is the name given to this specific agent:

Notice that in the screenshot above, the project to be observed, gitops-project, was created in an earlier step.

The next step consists of the creation of a GitLab Rails Agent record to associate it with the Kubernetes agent configuration repository project. In the following screenshot, you see the commands that the user enters to first identify the task-runner pod, to log into it, to enter the Rails Console, and finally to create the agent record and a token for it:

In the above screenshot, the last command uses the agent token to create a secret on the K8s cluster for secured communication between the agentk and the kas components.

The agentk pod creation on the K8s cluster is the next step. For this, the user creates a resources.yml file, in which the secured communication protocol between the agentk and the kas is specified as shown in the following snippet:

In the above snippet, secured WebSockets protocol is being used. GitLab also supports gRPC.

Once the resources.yml file is updated with the corresponding GitLab instance information, the user proceeds to create the pod:

Creation of the agentk pod.

In the screenshot above, you can see the execution of the kubectl apply that created the agentk pod in the K8s cluster.

Now that the agentk and kas have been installed and are communicating securely with each other, the user can start performing some GitOps flows. Although the GitLab Flow is the recommended approach for DevOps, it is also applicable to GitOps flows; after all GitOps is all about applying the goodness of DevOps to managing Infrastructure as Code.

This means that the user should create an issue and then a merge request, in which all stakeholders can collaborate towards the resolution of the issue. For the sake of brevity, in this technical blog post, we will skip all these steps and show you how updates to the Infrastructure as Code configuration files are automatically applied to the infrastructure components.

NOTE: Fostering Collaboration is a great benefit of GitOps. For more information on this, check out this short tech video.

For example, the user can start making updates to the manifest.yaml file under the gitops-project, which is being observed by the kas component. Here you can see the user has pasted content into this file: 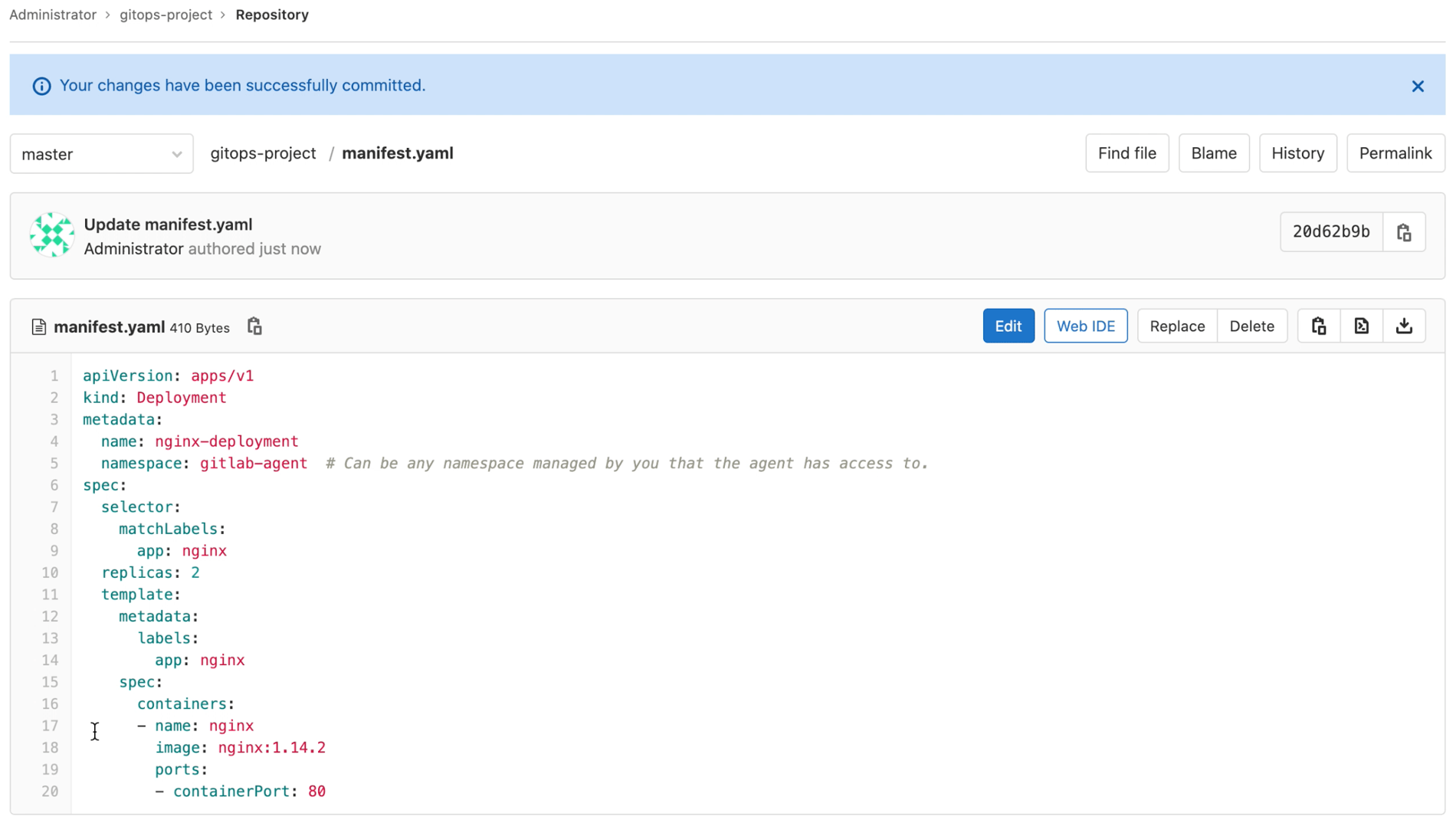 Remember that this file had been created as an empty file. As soon as the user commits the changes displayed above, the kas component will detect the changes and communicate these to the agentk component, which is running on the K8s cluster. The agentk will immediately apply these changes to the infrastructure. In this example, the user has updated the infrastructure configuration file to have 2 instances of an nginx. As shown in the screenshot below, the agentk has applied these updates by the instantiation of 2 nginx pods in the K8s cluster: 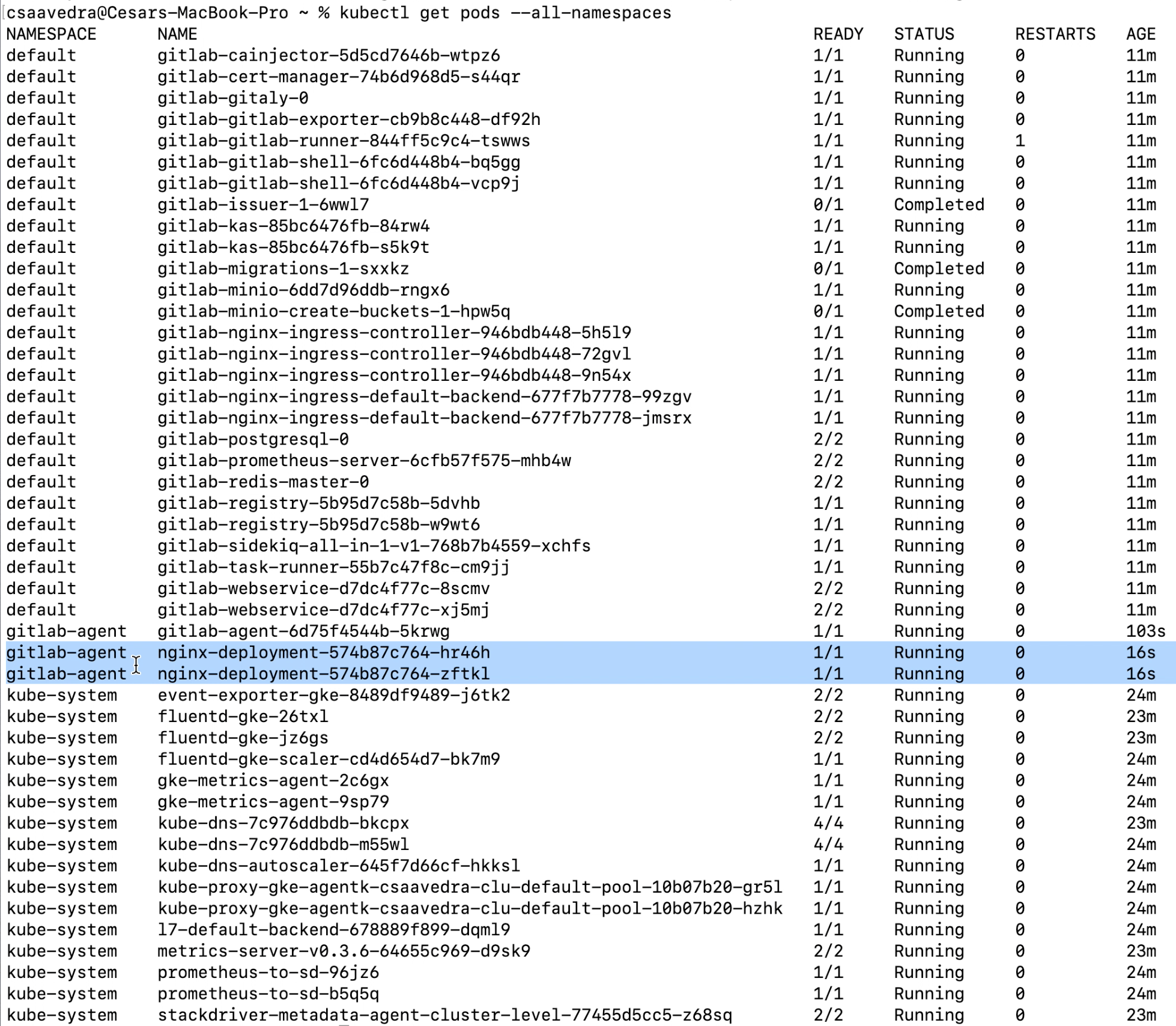 If the user were to change the manifest.yaml file one more time and increment the replicas of the nginx pod to 3: 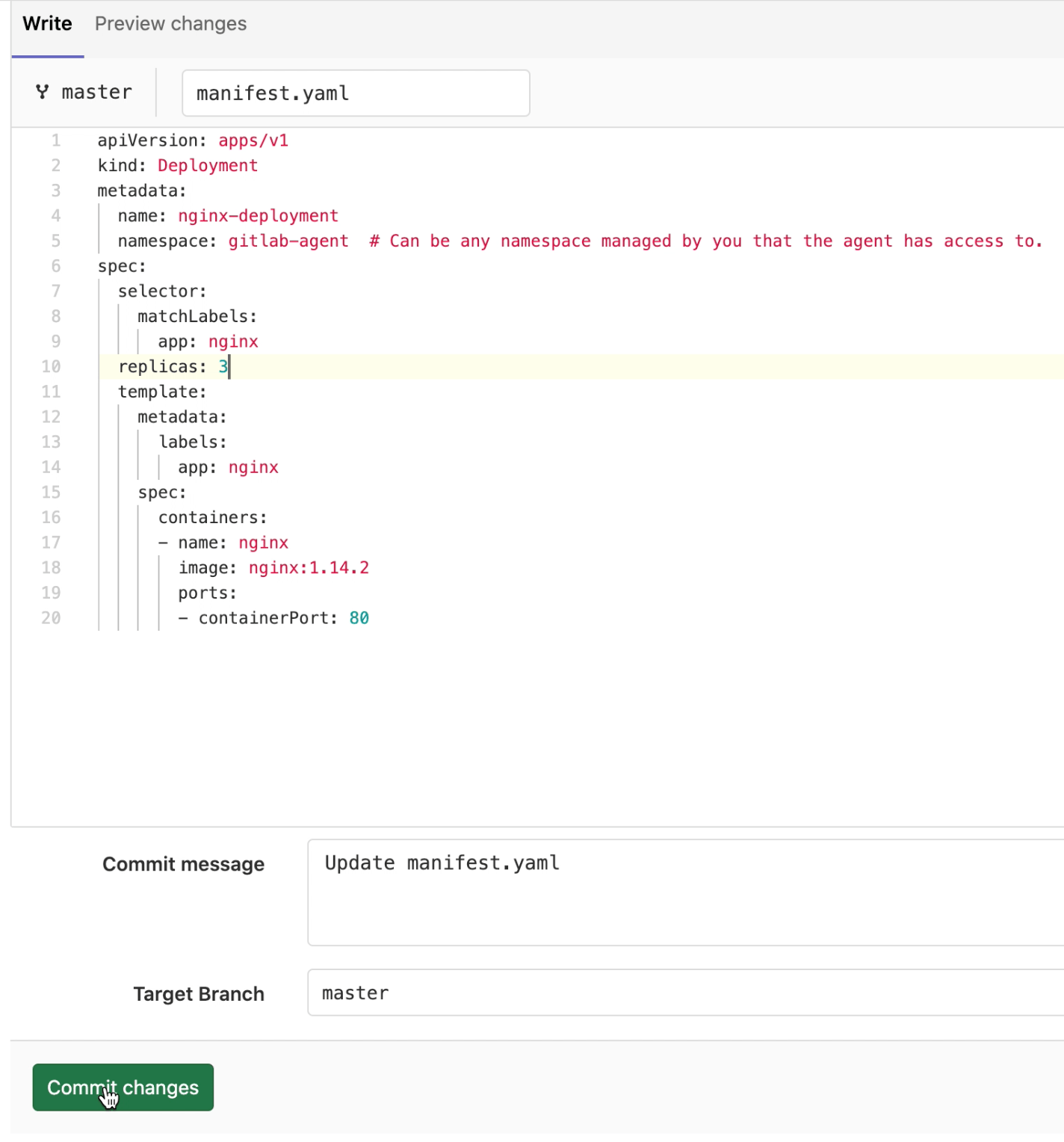 Again, as soon as the commit takes place, the kas component detects the update and communicates this to the agentk component, which in turn, spins up a third nginx pod in the K8s cluster: 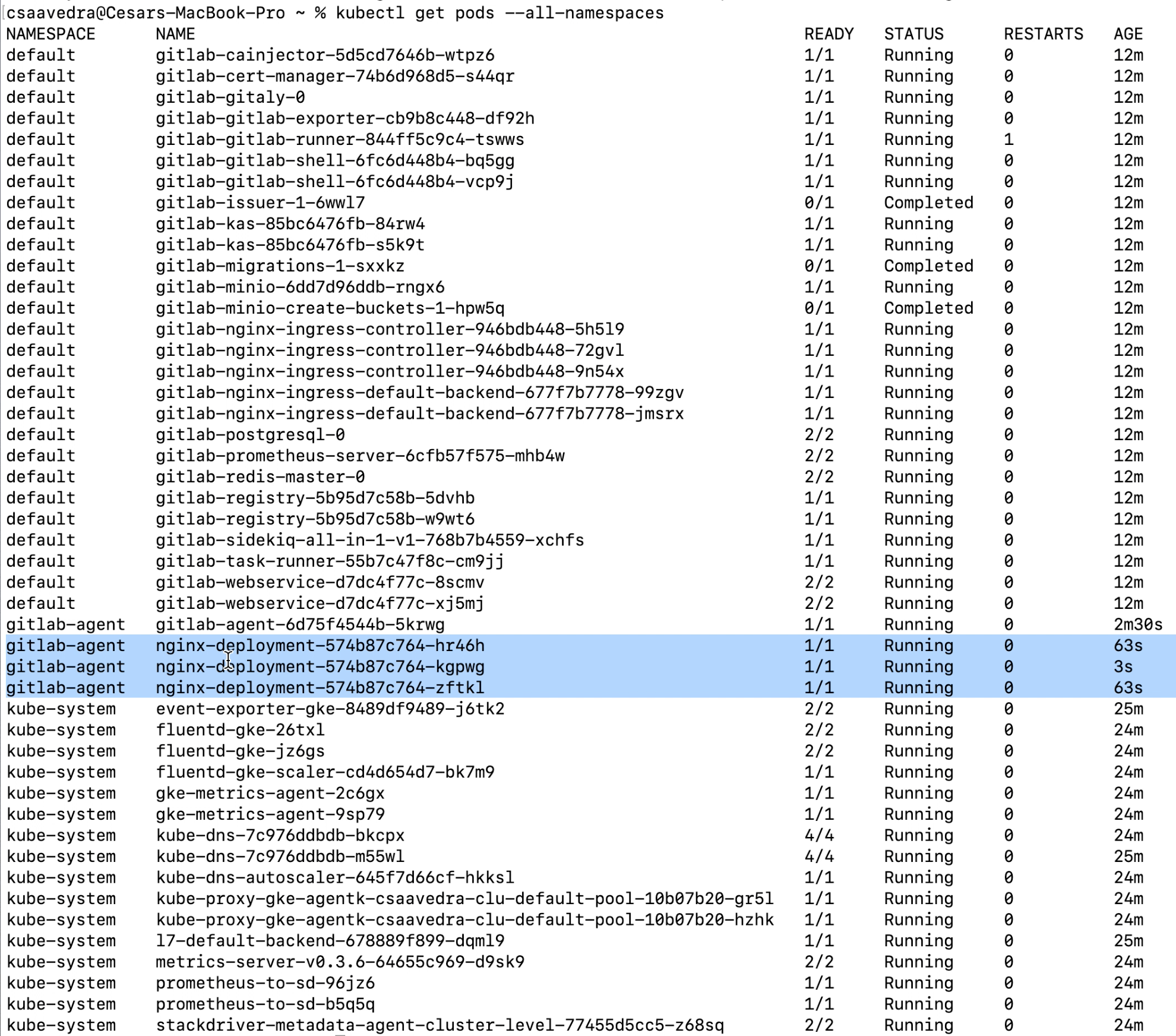 The kas component running on GKE.

And then the user can drill down into the log of the kas component, and see how it is detecting commits on the project it is observing:

Likewise, the user can navigate to the agentk component of the K8s cluster:

The agentk component running on GKE.

And, again drill down to its log to see, how the agentk component runs synchronizations with the kas component:

In the following screenshot, the user sees the log statements indicating that the agentk is instantiating a third instance of an nginx pod:

The above sections described an example of the setup needed to install and run the GitLab Agent for Kubernetes as well as how projects are monitored and synchronized from GitLab to a running K8s cluster.

We have gone over the setup and use of the Agent, which is an integral part of our pull-based or agent-based approach to GitOps. We also covered a GitOps flow that leveraged this agent-based approach, which is a good choice for Kubernetes shops that need to keep their clusters secured and behind their firewall. This approach comes with its drawbacks in that you need to maintain the agents, which also consume the resources of your infrastructure components. In part two of this series, we will discuss the push-based or agentless approach to GitOps.