Today, we are excited to announce the release of GitLab 15.6 with Git abuse rate limiting, Support for special characters in CI/CD variables, group and subgroup-level scan result policies, DAST API analyzer for on-demand DAST API scans and much more!

These are just a few highlights from the 30+ improvements in this release. Read on to check out all of the great updates below.

We thank the wider GitLab community for the 200+ contributions they provided to GitLab 15.6! At GitLab, everyone can contribute and we couldn't have done it without you!

To preview what's coming in next month’s release, check out our Upcoming Releases page, which includes our 15.7 release kickoff video. 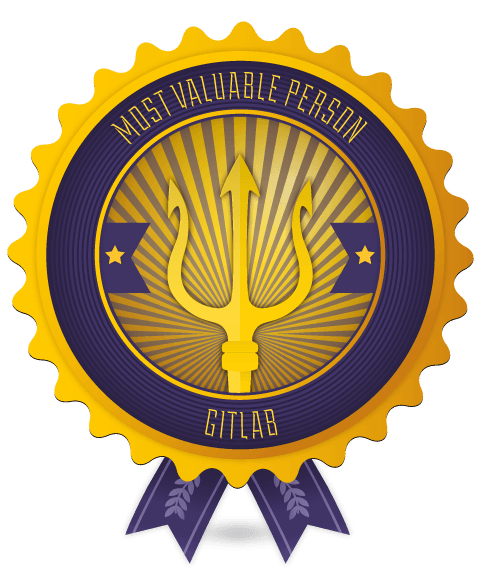 This month's Most Valuable Person (MVP) is Deja Norby

Deja contributed 9 different merge requests across multiple stages including Create, Secure, and Fulfillment. She resolved many linter issues helping GitLab continue to iterate. We are thankful for Deja’s contributions and it sounds like she learned a lot by contributing. Thank you Deja! Your contributions deserve the spotlight, and embody what iteration is all about.

GitLab now supports managing scan result policies at both the group and subgroup levels. These policies automatically flow down and apply to all projects inside the group. This makes it considerably easier to enforce these policies uniformly for large organizations that have large numbers of projects. To get started, have a group or subgroup Owner link an associated security policy project on the Security & Compliance > Policies page.

In GitLab 15.6, we’re introducing Git abuse rate limiting. Enable this feature to automatically notify administrators when a user downloads or clones more than a specified number of repositories in a group or any of its subgroups within a given time frame.

You can also automatically ban users who exceed the rate limit. Banned users cannot access the main group or any of its non-public subgroups. Access to unrelated groups is unaffected. Bans are permanent by default, but group administrators can always unban a banned user. 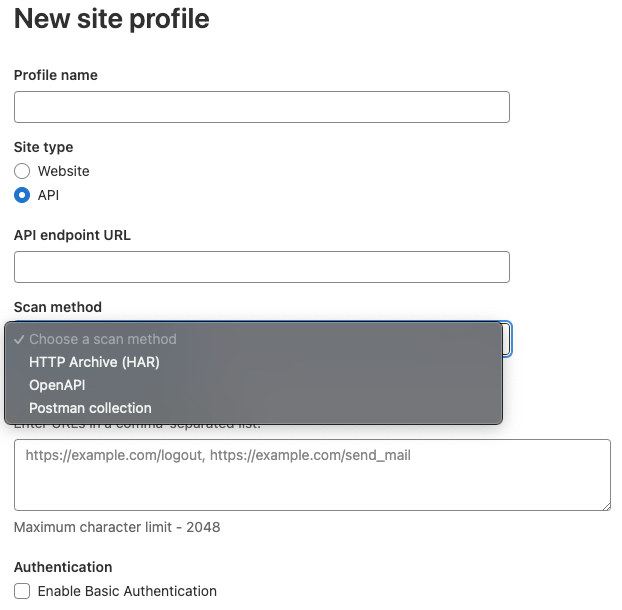 Previously, it was difficult to use the $ character in a CI/CD variable because $ normally signifies the start of another variable. GitLab would interpret it as a variable and try to expand it. In this release, we are introducing the variable: expand: keyword which will allow you to mark a variable as “raw”. A raw variable can contain any special characters and is not expanded when passed to the GitLab runner.

The more complex your .gitlab-ci.yml configuration is, the more difficult it is to maintain and scale. By adding support for CI/CD variables with the rules: exists keyword, you can now use variables for paths or filenames. Having a single source of truth by storing frequently used values in variables ensures consistent behavior and makes your configuration easier to manage. 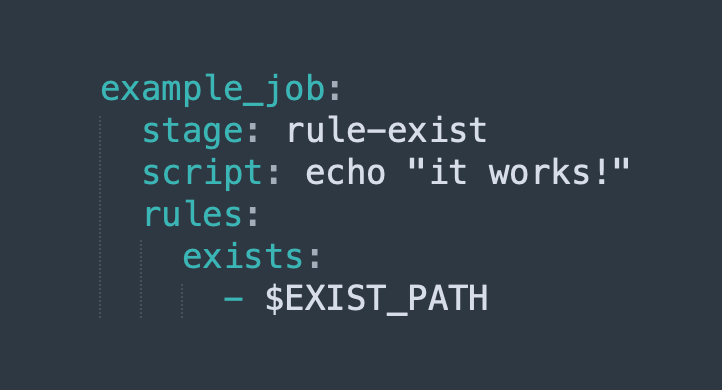 Other improvements in GitLab 15.6

Associate MRs to issues when migrating groups with projects

Default split view for Markdown preview in the Web Editor

The ability to preview Markdown files side by side while editing was introduced in GitLab 14.2. With this release, we’ve made the split view the default experience for previewing Markdown in the Web Editor. In the Preview tab, you can now see a live Markdown preview that updates as you type alongside your content. This way, you can be confident that your markup is valid and renders as you intended without having to switch between the Write and Preview tabs.

When GitLab administrators get reports from their development team that a CI job is either waiting for a runner to become available or is slower than expected, one of the first areas they investigate is runner availability and queue times for CI jobs. While there are various methods to retrieve this data from GitLab, those options could be more efficient. They should provide what users need - a view that makes it more evident if there is a bottleneck on a specific runner.

The first iteration of solving this problem is now available in the GitLab UI. GitLab administrators can now use the runner details view in Admin Area > Runners to view the queue time for CI job and job execution duration metrics. 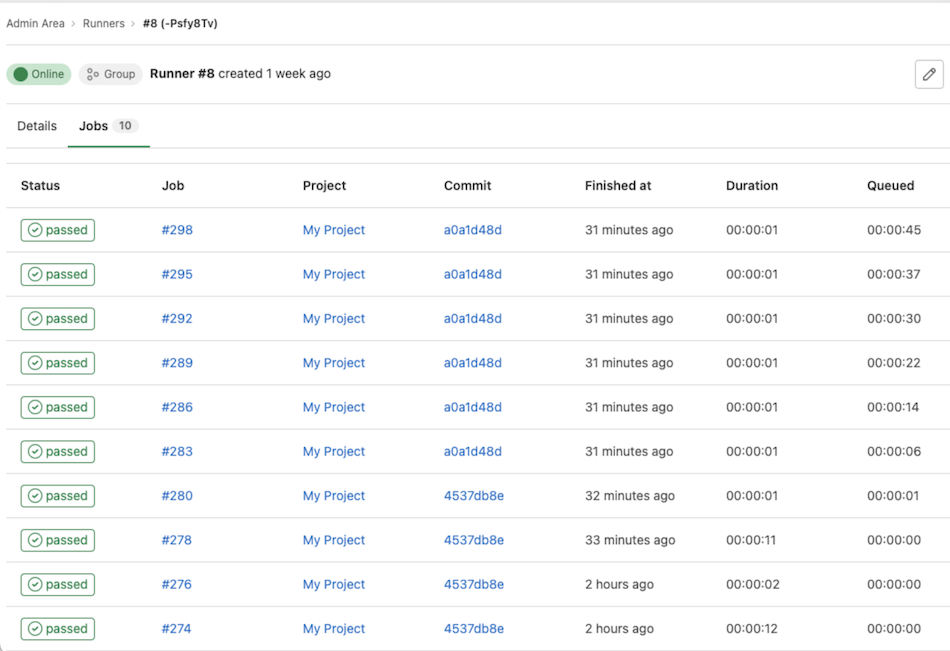 GitLab Secret Detection finds leaked credentials in your codebase so you can revoke them and protect your organization. It detects many kinds of sensitive values, including GitLab Personal Access Tokens.

GitLab is dogfooding a new feature where Personal Access Tokens on GitLab.com are automatically revoked if Secret Detection finds them leaked on the default branch of a public repository.

We’ll roll this feature out across GitLab.com and Self-Managed instances in an upcoming release. If you’re interested in testing this feature during its Beta period, please let us know by completing this form.

GitLab Code Quality includes an MR widget, a pipeline report, and MR diff annotations to help you find and fix problems in your code. Many tools, including code scanners and linters for technical documentation, can output results in Code Quality’s open report format.

Previously, you could only see results from a single scan in the pipeline report and MR diff annotations. This made it harder to add custom scanning tools to your pipelines.

Now, all of the Code Quality views show results from all report artifacts saved in a pipeline.

This new feature is controlled by a feature flag that is now enabled by default in GitLab.com. We plan to enable the flag by default in Self-Managed instances in GitLab 15.7.

We shipped initial Helm-chart support for the agent for Kubernetes in GitLab 15.4. In that release, Helm values had to be included in the Helm charts, which caused large-scale code duplication for users.

Mount ConfigMap to volumes with the Auto Deploy chart

The default Auto Deploy Helm chart now supports the extraVolumes and extraVolumeMounts options. In past releases, you could specify only Persistent Volumes for Kubernetes. Among other use cases, you can now mount:

Thanks to Maik Boltze for this community contribution.

Users can now require Dependency Scanning to run on a regular schedule or as part of project CI pipelines, independent of the .gitlab-ci.yml file’s contents. This allows security teams to manage these scan requirements separately without allowing developers to change the configuration. You can get started by creating a scan execution policy on the Security & Compliance > Policies page. 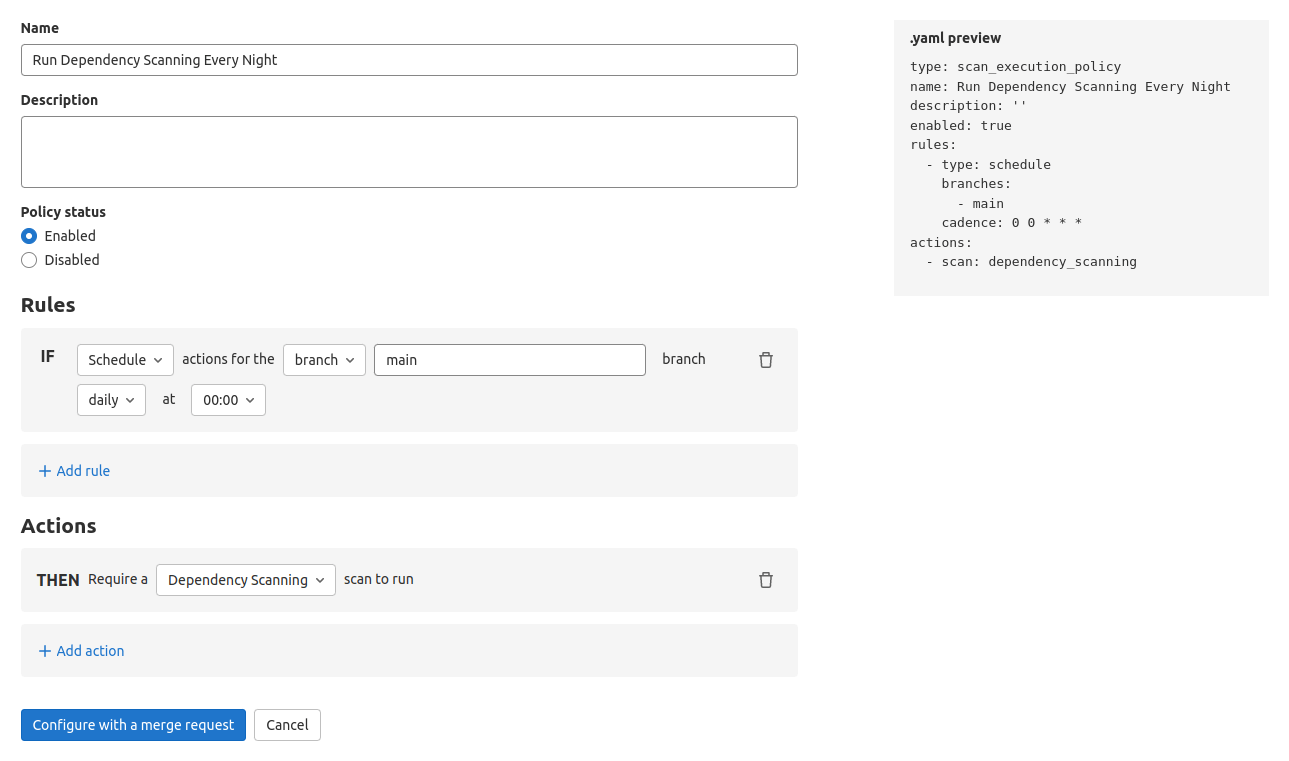 Display a summary of a user’s contributions before deletion

Previously, when you deleted a user and their contributions from the Admin area, it was not clear what and how many associated contributions were about to be deleted. Now, before proceeding with deleting a user, a confirmation message lists the number of groups, projects, issues, and merge requests associated with the user. This summary can help you prevent the accidental deletion of projects or subgroups.

To help you analyze team contributions, we have now exposed the Contribution Analytics data through GraphQL. Using this new API, you can identify opportunities for improvement and gain insights into the top contributors in your team.

The Contribution Analytics report visualizes the team’s push events, merge requests, and opened or closed issues at a group level over time. 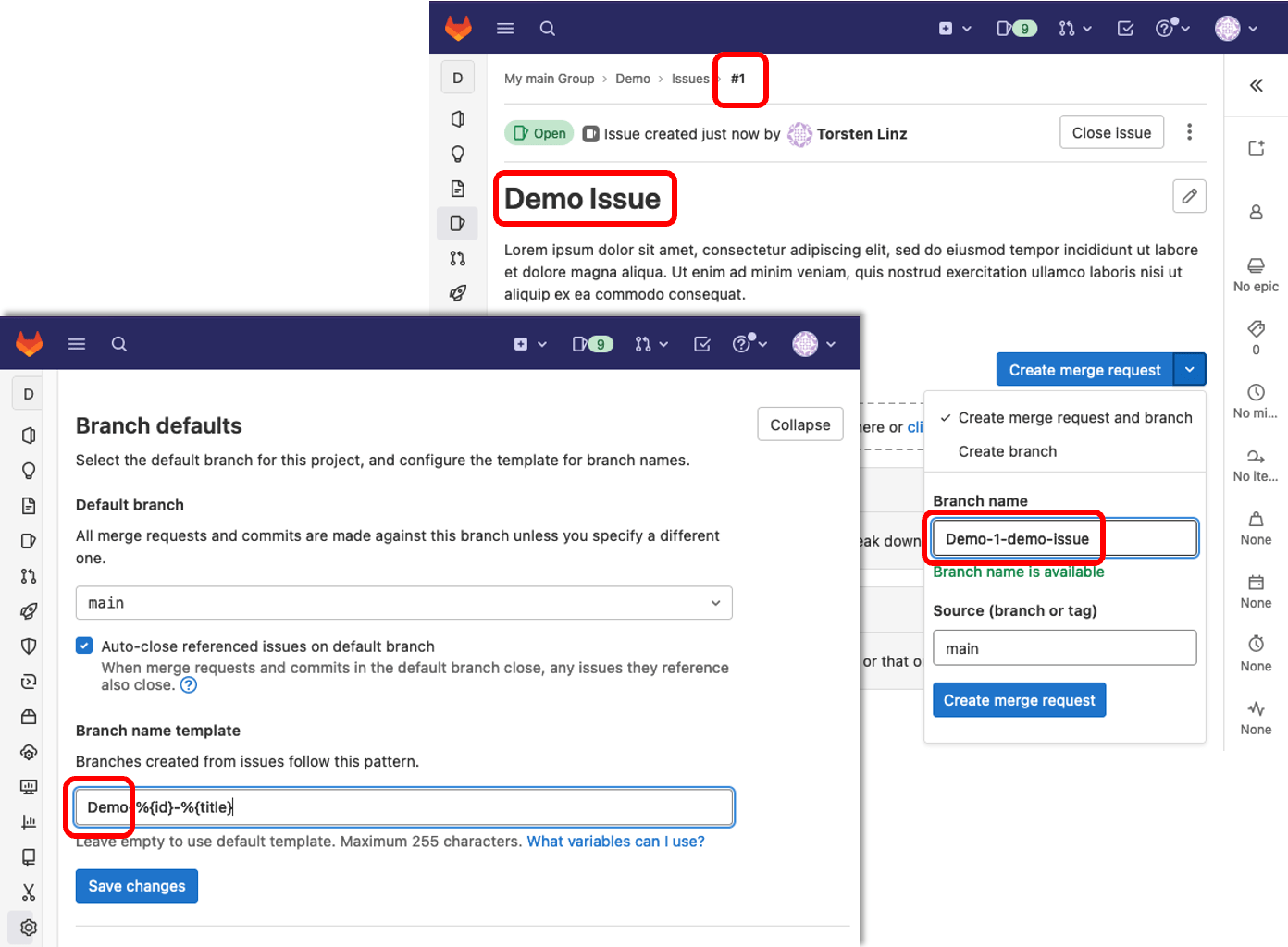 Previously, the UI was required to update the access levels of protected branches. The API required you to unprotect, then reprotect, a branch when updating its access levels. Now, the protected branches API enables you to directly update which users or groups are allowed_to_push, allowed_to_merge, allowed_to_unprotect, and more. This one-step method decreases the risk of a bot changing this setting and leaving a branch unprotected.

We’re also releasing GitLab Runner 15.6 today! GitLab Runner is the lightweight, highly-scalable agent that runs your CI/CD jobs and sends the results back to a GitLab instance. GitLab Runner works in conjunction with GitLab CI/CD, the open-source continuous integration service included with GitLab.

On your first scan after the update, existing findings we’ve identified as false positives will be marked “No longer detected”, and new findings may be created.

If you include the GitLab-managed SAST template (SAST.gitlab-ci.yml), you don’t need to do anything to receive these updates. However, if you override or customize your own CI/CD template, you need to update your CI/CD configurations.

To remain on a specific version of any analyzer, you can pin to a minor version of an analyzer. Pinning to a previous version prevents you from receiving automatic analyzer updates and requires you to manually bump your analyzer version in your CI/CD template.

In this release, we are adding additional key information for multiple approval rules in the approval UI. Now during the workflow of approving a deployment, you can see who has already approved, as well as how many approvals are still needed and from which groups. This key information enables transparency and context for making the approval decision and also ensures compliance during an audit review. 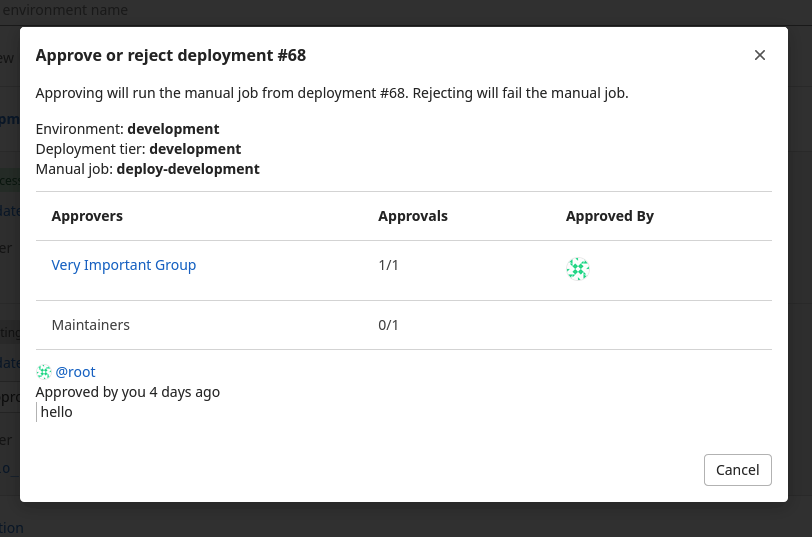 This release adds full support for Kubernetes version 1.25, released in August 2022. If you use Kubernetes, you can now upgrade your clusters to the most recent version and take advantage of all its features.

Read more about our Kubernetes support policy and other supported Kubernetes versions.

Add linked resource to an incident with a quick action

The minimum required version of Git is now v2.37.0. This newer version has a lot of changes that we, and other Git community members, have made that provide a much better experience and resolve many issues, including:

In every release, we continue to make great strides improving GitLab’s performance. We’re committed to making every GitLab instance faster. This includes GitLab.com, an instance with over 1 million registered users!

In every release, we make great strides in improving the overall effectiveness and usefulness of our product.

We also have a UI Polish Gallery to track important updates to our interfaces. These updates, while often small, improve your user experience.

In GitLab 15.6, we’re shipping usability improvements for issues, projects, milestones, and much more! We highlight the following changes in GitLab 15.6:

New deprecations and the complete list of all features that are currently deprecated can be viewed in the GitLab documentation.

The complete list of all removed features can be viewed in the GitLab documentation.

Removal of support for NFS as Git repository storage

As of November 22, 2022, we are removing support for customers utilizing NFS for Git repository storage. This was originally planned for May 22, 2022, but in an effort to allow continued maturity of Gitaly Cluster, we chose to extend our removal of support date until now. Please see our official Statement of Support for further information.

This change in our support follows the existing halt in development for NFS for Git repository storage that occurred in GitLab 14.0.

Gitaly Cluster offers tremendous benefits for our customers such as:

We encourage customers currently using NFS for Git repositories to migrate as soon as possible by reviewing our documentation on migrating to Gitaly Cluster.

Important notes on upgrading to GitLab 15.6

PostgreSQL versions have been bumped from 12.10 to 12.12 and 13.6 to 13.8. This can cause downtime for users upgrading to 15.6. More information can be found in our documentation regarding automatic restarts when PostgreSQL version changes.