At GitLab, we believe the best approach to software delivery is to ship quickly and often. By building a team and a company culture that values iteration over perfection, we are able to ship new improvements and features every month!

So it should come as no surprise that in 2016, we shipped 12 new versions of GitLab! Included in those releases were major new features like Issue Boards and Cycle Analytics, and the completion of our idea-to-production vision.

For a visual of how far we’ve come, take a look at these two screenshots. 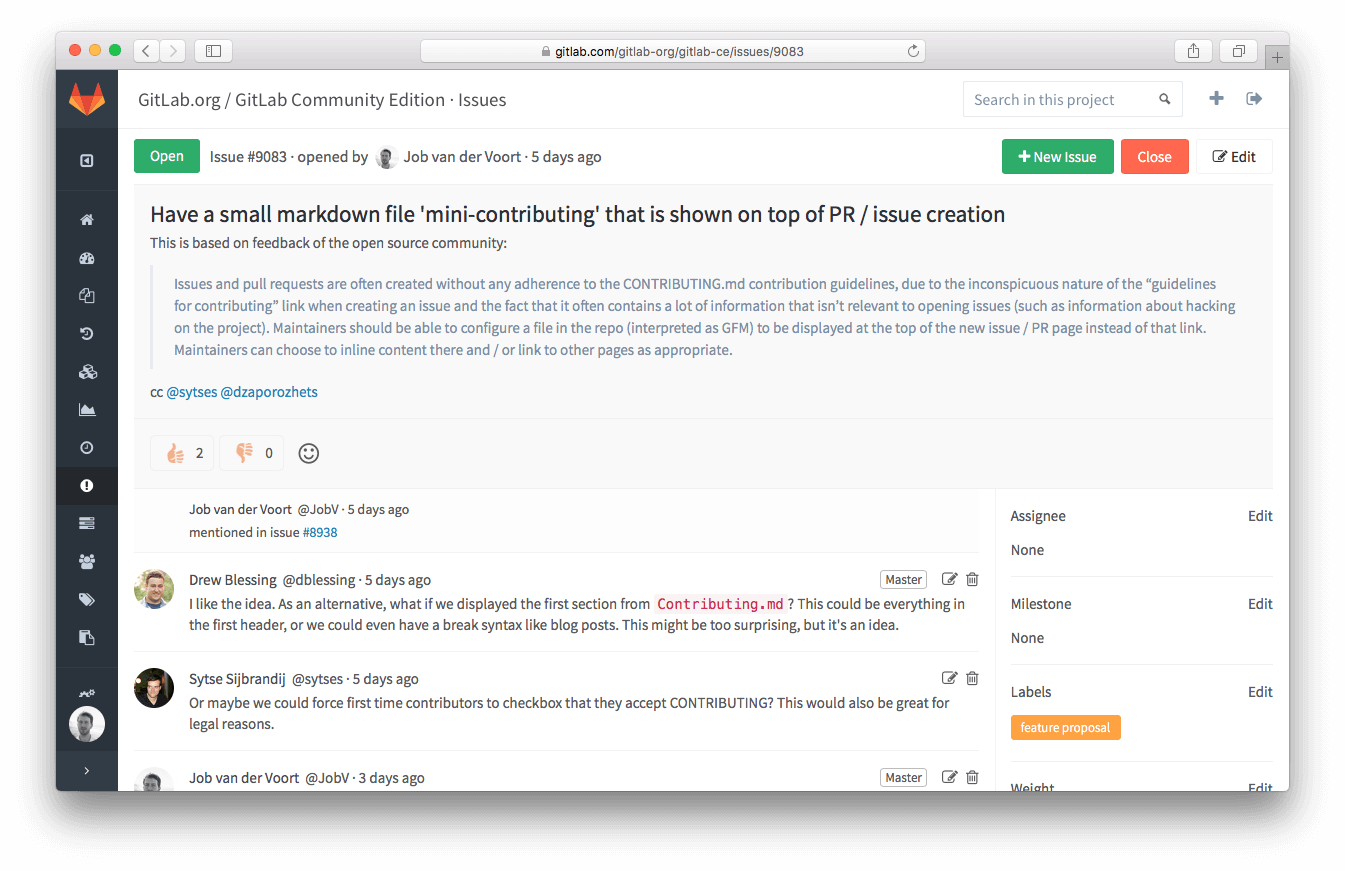 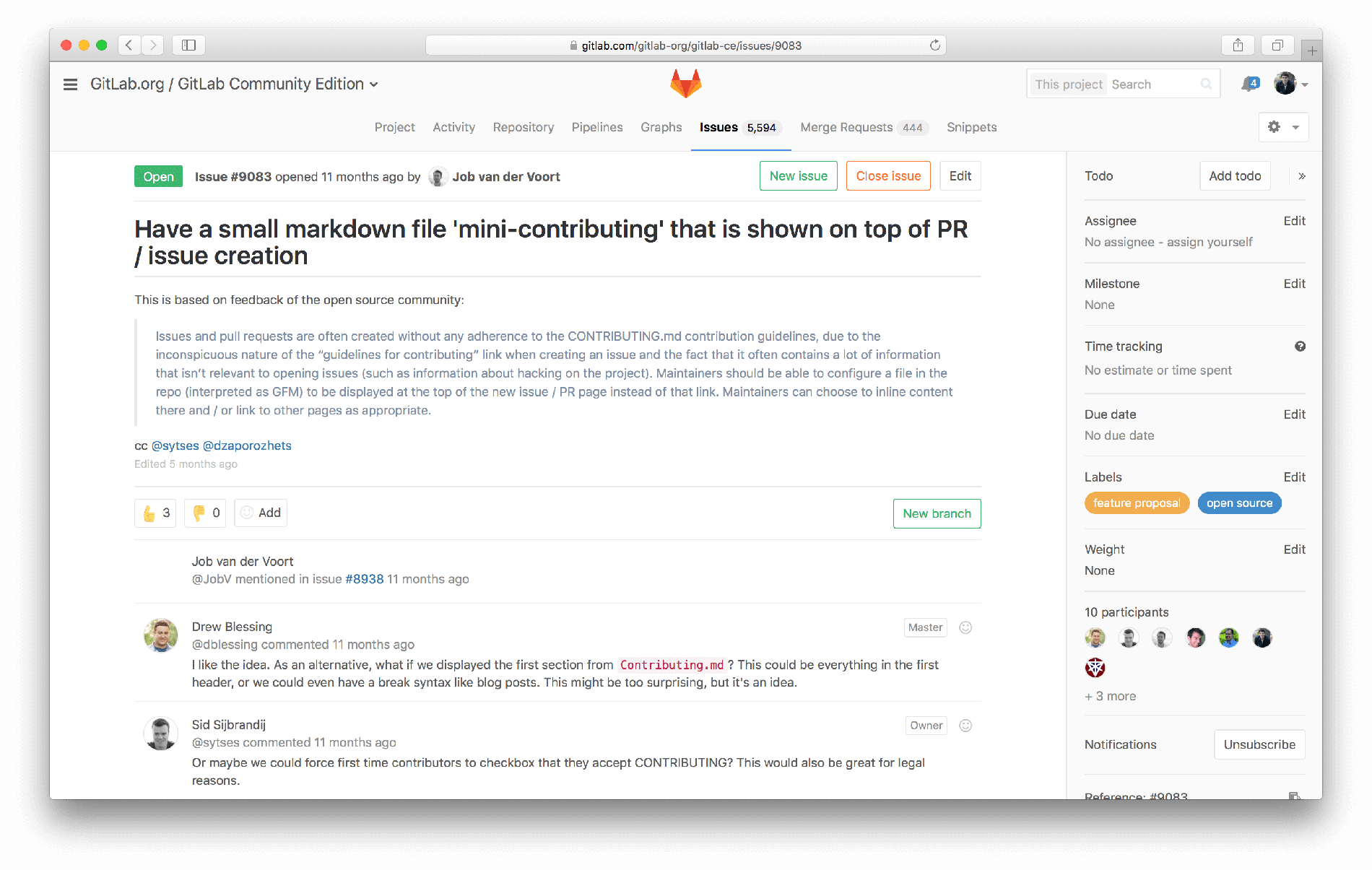 We kicked off the year with our 50th release of GitLab.

A browser was added for Build Artifacts. Artifacts are the output resulting from builds, and can be used to provide binaries for a piece of software, the compiled content of a static site, or the results of a test coverage checker.

We introduced a File Finder, a much-requested addition contributed by the community! It helps find any file in a repository using "fuzzy" search.

February saw the release of GitLab 8.5 with the introduction of Todos – our take on a more useful notification system.

Also included in February's release was an alpha version of GitLab Geo. GitLab Geo is available for GitLab Enterprise Edition Premium and allows companies with offices around the world to mirror their GitLab instance in multiple places. This makes downloading large repositories much faster for all team members, no matter where they are.

GitLab Pages added support for custom domains and custom TLS certificates. This allows users to host their static sites on custom domains without giving up the added security of HTTPS. While GitLab Pages is an Enterprise Edition-only feature right now, we'll be bringing it to all versions in an upcoming release.

Confidential issues are issues visible only to members of a project with sufficient permissions. Confidential issues can be used by open source projects and companies alike to keep security vulnerabilities private or prevent surprises from leaking out.

Label subscriptions send any newly-labeled issues to your inbox so you can keep up-to-date with issues and merge requests relevant to you.

Due dates were added for issues. They can be used to keep track of deadlines and make sure features are shipped on time.

Cherry picking is a feature in Git that takes individual commits or sets of commits from one branch and adds them to another. It’s most commonly used to backport bug fixes or security patches from the default branch to older, stable branches. GitLab 8.7 added cherry picking to the user interface and lets users do more of their work without switching to the command line.

With GitLab 8.8, GitLab CI gained the concept of Pipelines, collections of builds that are executed in stages. Pipelines allow for better organization and parallelization.

GitLab Container Registry was a huge addition to our offering with GitLab CI. If you’ve used Docker, you probably know what a container registry is. Container registries are used to host and provide Docker containers for testing and deployment of software. Integrating the container registry means that uploading and download Docker images is easy and fast, especially for local instances.

Read the full blog post on the GitLab Container Registry for more information.

File Locking is an EE Premium feature that can be used to prevent binary files from being overwritten. This is useful for many use cases, like game development with models, art assets, and sound files or on a website when editing a graphic. File Locking also works for non-binary files.

With GitLab 8.9 you can now define Environments. Environments allow you to track deployments and quickly understand things like "what's running in staging?"

For more information, see our blog post on Environments and Deployments.

With GitLab 8.9, labels can be starred and added to a priority list. Prioritized labels are like any other label, but sorted by priority. This allows you to easily sort issues and merge requests by priority.

With 8.9 we replaced the often-confusing sidebar paradigm with a new tabbed header. We've been really happy with this change, and think it was a huge improvement over our past iterations. 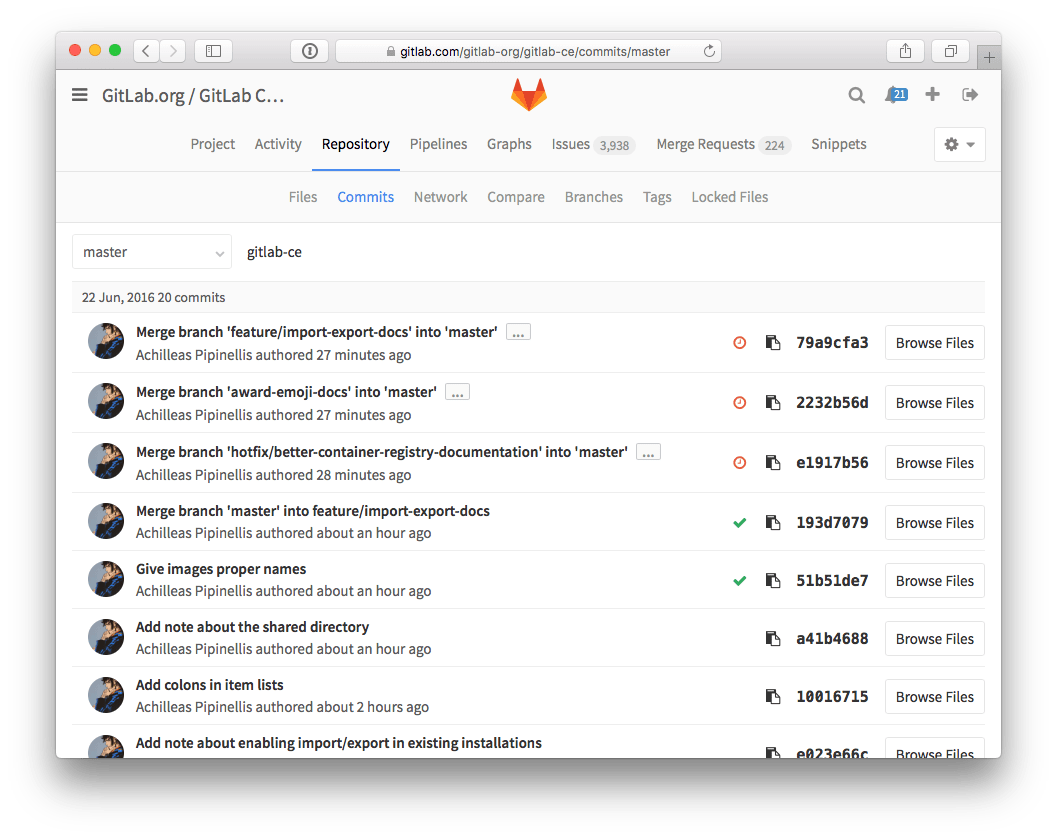 Our branch protection feature was improved with Wildcard Branch Protection, allowing repositories to protect branches based on their names, for example release-* protects any branch which starts with release-. 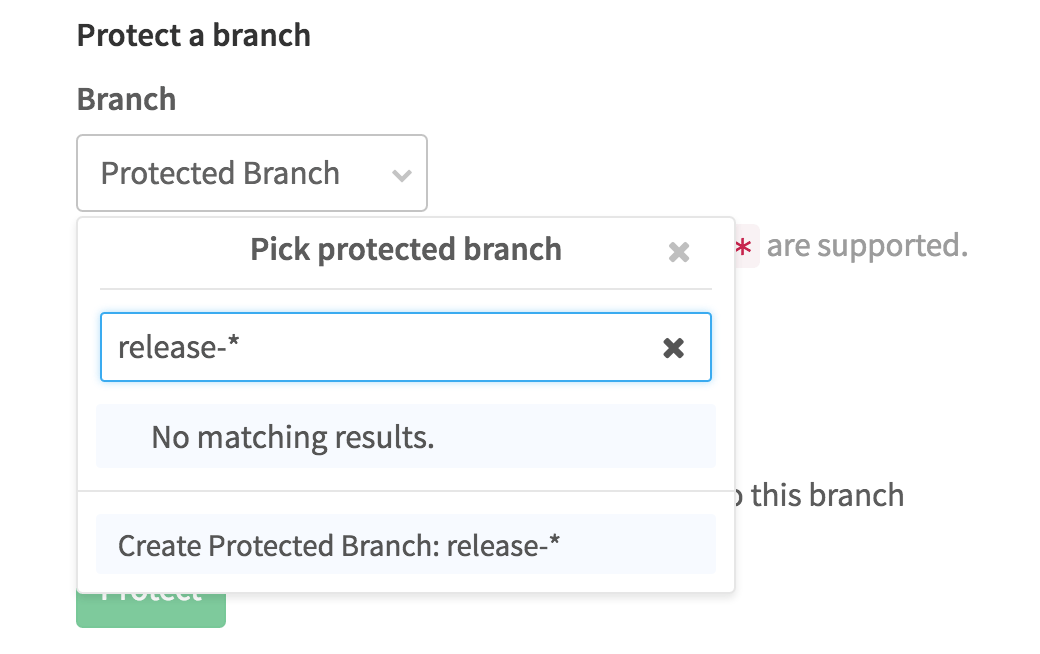 Manual actions were introduced for CI. This addition allows users to maintain fine-grained control over how they handle things like deployments to staging or production, rather than deploying automatically upon a pipeline's completion.

GitLab 8.11 was probably the most exciting release of the year, bringing with it a number of major features and improvements.

Issue Boards are another way of tracking project issues. Similar to existing kanban board software, issue boards integrate with the issues you already have in GitLab and organize themselves based on project labels. If you're already using labels to track progress on issues, issue boards shouldn't take more than a minute to set up.

Pipeline Graphs are an awesome visual representation of a project's Pipeline, they help users understand the way their pipelines are run.

With the addition of Slash Commands, comments can be used to modify the status, author, assignee, due date, milestone, and labels of a merge request or issue, among other things. This feature gives users more power over their issues and merge requests without ever leaving the keyboard or needing to memorize keyboard shortcuts.

8.11 introduces integration with Koding, an online IDE. Koding allows users to develop and test your project without ever leaving the browser. Note that Koding integration isn't currently supported on GitLab.com, only self-managed GitLab instances.

The headline feature of 8.12 was Cycle Analytics, a new way of tracking software development using the data GitLab gathers as you use it. Cycle Analytics is the last step of the GitLab Workflow. 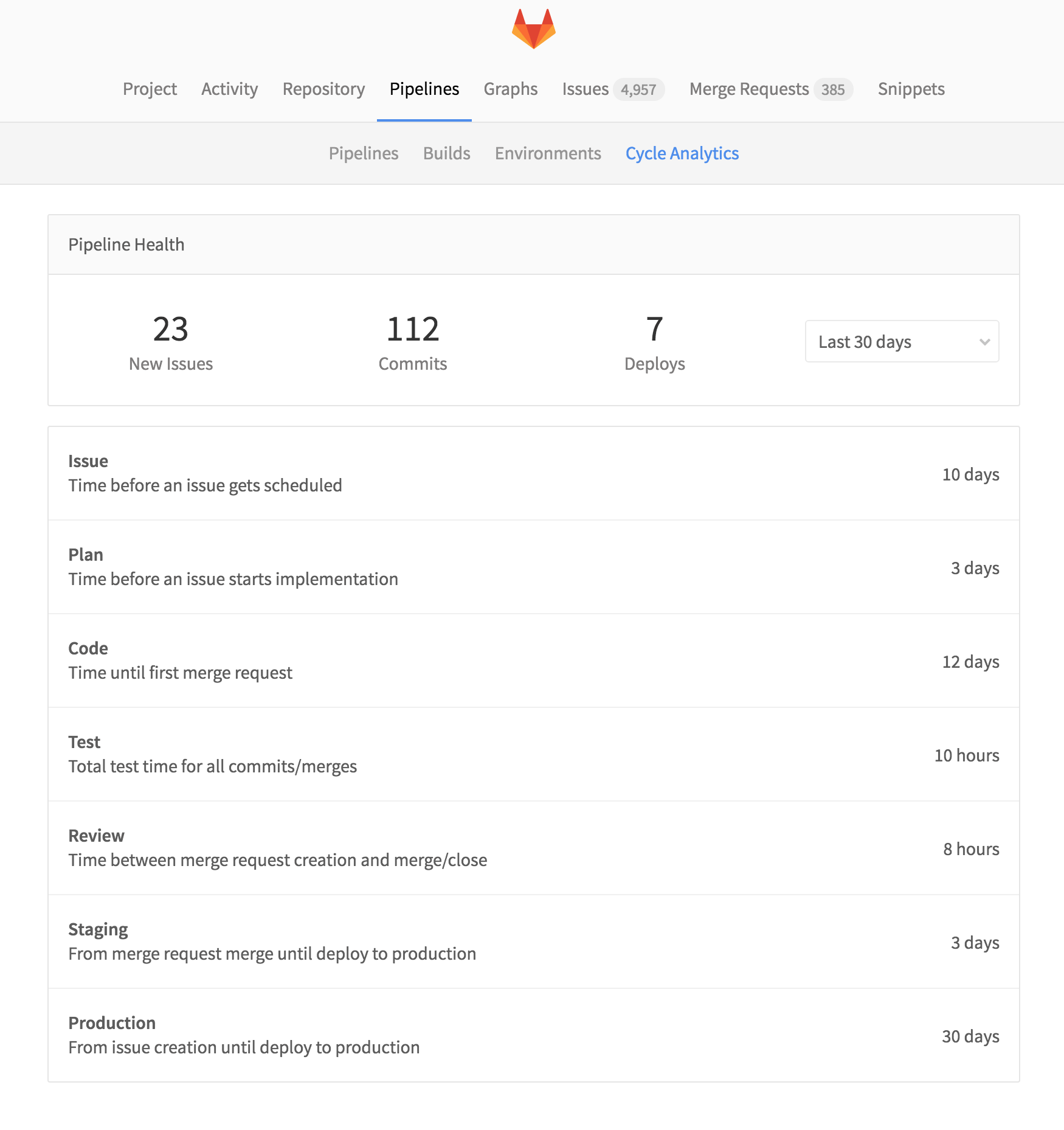 Code search was improved for Enterprise Edition Starter in GitLab 8.12 with the addition of Global Code Search. This allows users to search across all the repositories on an instance, and is especially useful for microservice-based architectures and for reusing code from existing projects.

With Merge Request Versions you can view previous states of a merge request: compare between a previous commit and the target branch or even between versions, showing you what has changed between certain commits.

Issue Boards were improved for EE Starter users by allowing more than one issue board for a given project. This is great for large projects with more than one team, or in situations where a repository is used to host the code of multiple products.

With the introduction of the Time Tracking Beta, companies that need time tracking tools can use them right from within GitLab.

We introduced Chat Commands. Chat commands allow you to interact with your GitLab instance from Mattermost.

A new addition to GitLab CI in this release was Review Apps. Review Apps can be used to deploy merge requests from your GitLab instance to a dev or staging environment for testing. At GitLab, we use these for testing about.gitlab.com as well as docs.gitlab.com.

Rounding off the year with GitLab 8.15, we finished the base of our idea-to-production toolset. Moving on to 2017, we'll build on our current product to make it easier to use and more powerful.

Auto Deploy is an easy way to configure GitLab CI for the deployment of your application. Right now it supports deployment to OpenShift, with more templates coming in future releases.

The addition of the Web Terminal brings more power to the GitLab web interface. If you deploy to your environments with the help of a deployment service (e.g. Kubernetes), GitLab can open a terminal session to your environment and let you debug on your staging or – if you so dare – production site.

LaTeX support was added in 8.15 to improve GitLab for scientists, mathematicians, and anyone else who wanted to use LaTeX in their issues or merge requests. LaTeX support was contributed by the community.

As always, if you found this post interesting and want to contribute to the project, we’d be happy to have you! Take a look around the Accepting merge requests label in the GitLab CE project, and download the GitLab Development Kit to get started. If you have any questions feel free to reach out on Twitter, in the GDK issue tracker, or in our IRC channel.

What improvements do you want to see this year?